Trump is now openly feuding with Dr. Fauci about the state of the pandemic 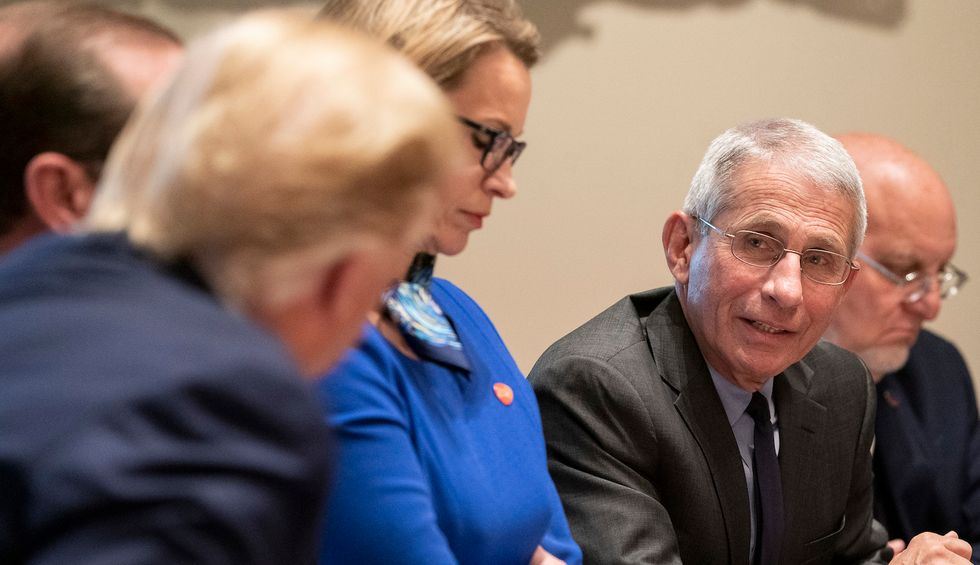 President Donald J. Trump listens as Dr. Anthony S. Fauci, Director of the National Institute of Allergy and Infectious Diseases, addresses his remarks during a meeting with fellow members of the Coronavirus Task Force and representatives from pharmaceutical companies Monday March 2, 2020, in the Cabinet Room of the White House. (Official White House Photo by Joyce N. Boghosian)
Cody Fenwick
July 08, 2020

President Donald Trump is in open revolt against public health experts in his own administration and against, it would seem, reality.

In comments to Greta Van Susteren on Tuesday, Trump lashed out at Dr. Anthony Fauci,  director of the National Institute of Allergy and Infectious Diseases, and contradicted his claim that we're still "knee-deep" in the first wave of the coronavirus pandemic. Fauci said we're in a "serious situation that we have to address immediately."

Trump would hear none of it.

"Well, I think we are in a good place," Trump told Van Susteren. "I disagree with him. Dr. Fauci said don’t wear masks and now he says wear them. And he said numerous things. Don’t close off China. Don’t ban China. I did it anyway. I didn’t listen to my experts and I banned China. We would have been in much worse shape. You wouldn’t believe the number of deaths more we would have had if we didn’t do the ban. And then we banned Europe also when Italy and the various countries were in such trouble. So, we’ve done a good job. I think we are going to be in two, three, four weeks, by the time we next speak, I think we’re going to be in very good shape."

While it's true that Fauci has gotten some things wrong — his early opposition to mask-wearing was a big mistake — it's notable that Trump always attacks others' mistakes while never admitting his own. Indeed, it's the premature reopenings across many states, which Trump aggressively pushed, that have led to the surge in cases across the country that we're now seeing. But in part because of his own responsibility for the resurgence of the virus, Trump seems unable to acknowledge it.

"The current state is really not good," Fauci said Monday. "We have been in a situation where we were averaging 20,000 new cases a day. Two days, it was at 57,500. So within a period of a week and a half, we've almost doubled the number of cases."

Previously, even as Fauci and Trump were still appearing together at coronavirus task force briefings, the pair were on separate pages about the promise of the drug hydroxychloroquine to fight COVID-19. Trump touted the claim as a potential miracle cure, while Fauci urged caution.

Other members of the task force disagree with Trump's current optimism, too. Both Dr. Deborah Birx and Vice President Pence warned governors on Tuesday that the outbreaks are accelerating in a worrying fashion.

Fauci has also criticized another of Trump's favorite talking points. The president has repeatedly pointed out that, despite the fact that reported coronavirus cases have surged to levels never before recorded, daily death figures have not returned to their early heights.

"If you look at the chart of deaths, deaths are way down," Trump said Tuesday.

But Fauci, again, warned against this argument.

"It's a false narrative to take comfort in a lower rate of death," he said at an online event with Sen. Doug Jones (D-AL). "There’s so many other things that are dangerous and bad about the virus. Don’t get into false complacency."

Many reasons have been floated to explain why deaths haven't spiked along with the rapid rise in coronavirus cases, including the fact that the infected population is younger and treatments have improved. But another possibility is that the spike in deaths may just be delayed and could be coming around the corner. Late Tuesday night, Worldometer reported that there were 994 new coronavirus deaths that day, the largest increase in a single day since June 10, nearly a month ago. It's possible that this large number will be an outlier, but it could also represent a rising rate of death to accompany the virus's resurgence.