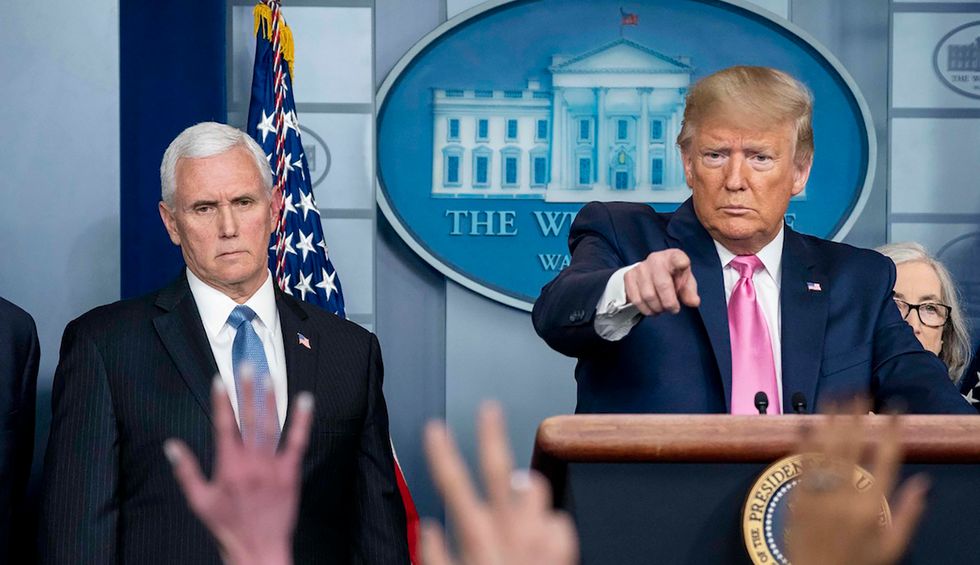 On Sunday, Politico posted a story speculating on whether or not Donald Trump, Mike Pence, and the rest of the White House team would have to "reassess" their demands that churches be allowed to hold unrestricted services during the COVID-19 pandemic despite numerous "super-spreader" events now demonstrating that it. Is. Not. Safe.

Politico needn't have bothered. Only hours afterwards, Mike Pence was the guest of honor at a Dallas, Texas megachurch rally that featured a choir of 100 unmasked singers and a packed audience even as Texas reeled from skyrocketing new COVID-19 cases. There's your answer, everyone who wasted their time wondering whether Trump and Pence would continue to risk the lives of their most fervent evangelical supporters in exchange for the visuals of crowds cheering them. They genuinely don't care if evangelicals live or die as long as they can squeeze a bit of footage out of each event.

Politico cites what is now the most infamous superspreader event: an Oregon church responsible for 258 new COVID-19 cases after Memorial Day weekend services. We have been seeing—and experts have been warning—that some behaviors are more dangerous than others during the pandemic. Prolonged indoor contact is dangerous. Heavy breathing, as comes with exercise, is dangerous. Singing, as in a choir, and loud talking, as from speakers trying to make themselves heard throughout a building, are more dangerous than normal speech and breath. It makes perfect sense: Anything that forces more moisture, and therefore more virus, out from the lungs is going to be dangerous.

Unfortunately for churches, that makes religious services (and gyms, and bars, and crowded restaurants) places where it is far more likely that the coronavirus will spread. If anyone among the Republican crowd gave a flying damn about saving the lives of their own constituents, they would make this as clear as the experts do. Wear masks. Wear them. Even if you do nothing else, wear the damn masks and stop spit from spreading the virus as you sing and preach about how God Himself will protect you no matter how much contempt you have for your own safety.

I'm genuinely confused, however, as to how anyone could seriously think anyone in the Trump administration, and especially Trump and Pence themselves, would be even slightly interested in "reassessing" their policy encouraging religious services to be held without proper safety precautions just because worshippers were getting sick and dying. They do not care. They have given zero indication that they care. They insisted on reopening churches because they believed their evangelical base would reward them for it, and what happens to any member of that base is of absolutely no interest to Mike Pence, man of Jesus, or Donald Trump, man of Himself Alone.

What sort of delusional insanity could possibly convince anyone otherwise? What evidence?

Here is what will happen if evangelical Trump supporters begin to die in large numbers: Trump and Pence will blame immigrants. Or minorities. Or the press for reporting it. Or Democrats for no reason whatsoever. Or bears, or wild boars, or Crayola crayons, or anarchists, or the harvesting of fall crops. It does not matter, because they do not care. If public officials urge churches to take basic safety precautious even as the pandemic explodes in Arizona, Florida, and Texas, Trump and Pence will attack those public officials for suggesting it.

Donald Trump is incompetent, delusional, and sincerely does not care how many more Americans after the first 125,000 might die. Mike Pence is a cultish pseudo-Christian whose faith is microns deep; the rest of him is filled with glassy-eyed ambition. Stop thinking anything but the absolute worst about either of them: Not once, not even one time during the last four years, has either of them done anything but the absolute worst they could do.

Trump has made mask-wearing and other basic precautions deeply political, gambling with the lives of everyone in the nation on the one-in-a-million chance that the pandemic will simply vanish without intervention. He is a delusional and incompetent nut. There is no going back from that, and there will never be, at any point, remorse.

And every competent pundit in America already knows I am right.