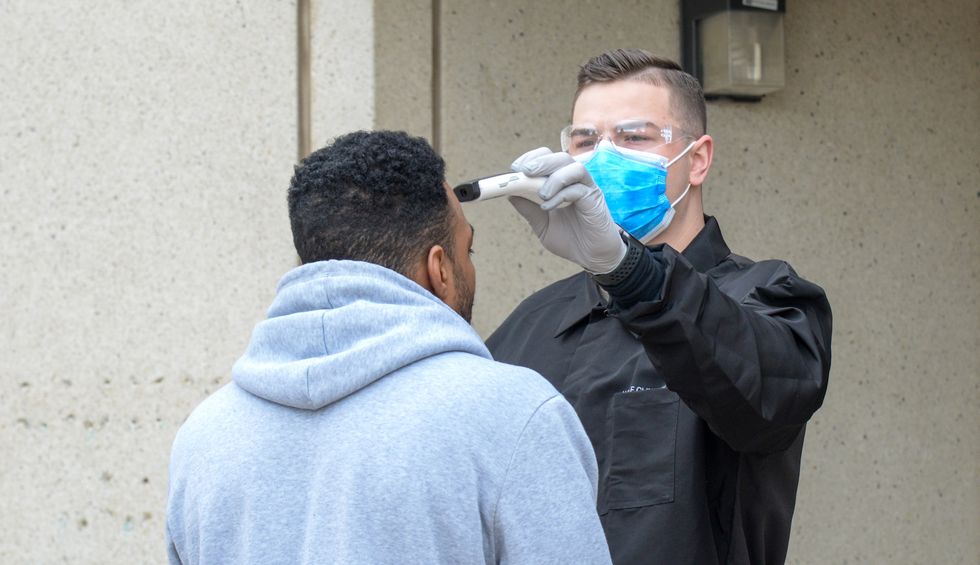 The worldwide conspiracy is vast — so vast that most of the world's scientists, journalists and political leaders are in on it. Somehow, in all this time, not a single one of the hundreds of thousands, possibly millions, of conspirators has grown a conscience and decided to blow the whistle on the conspiracy. Their goal? To ruin everything that right-wing America holds dear: the nuclear family, NFL football, needlessly enormous vehicles, the specials menu at Hooters.

To accomplish this dastardly goal, the conspiracy will fabricate a worldwide threat. They will falsify the data and use the power of institutions like governments and universities and scientific journals to perpetuate this hoax, tricking billions of people into believing this threat is real and needs a drastic response. The only people in the world who see through the hoax are right-wing Americans, of course, who know what lengths the "socialist left" will go to in order to destroy Mom and apple pie.

Coronavirus denialism has, in the period of a few short months, become one of the most serious political problems in our nation. It's a major obstacle to both containing the virus and reviving the economy, which can't happen until the virus is contained.

Coronavirus denialism isn't just flourishing on social media, but emanating from both right-wing media and from Republican leaders, most notably Donald Trump. Over the weekend, the president declared that "99 percent" of coronavirus cases are "totally harmless," a claim that isn't just false but part of a larger pattern of Trump's statements suggesting that the threat of the virus is being faked in order to harm him politically.

In other words, it's a conspiracy theory, one that dates at least back to February, when Trump claimed that fears of the coronavirus were a "new hoax" designed by Democrats to ruin him.

The rapid spread of this conspiracy theory is puzzling, especially as it requires many leaps of faith, including the belief that literally millions of professionals who don't know each other — scientists, journalists, government employees, health care providers and so on — are working to perpetuate this hoax.

There's a simple reason why right-wing America was so quick to rally around a conspiracy theory that's so utterly preposterous. They spent years training themselves by indulging in climate-change denialism.

It's not a stretch to say that climate-change denialism and coronavirus denialism are basically the same conspiracy theory. In fact, it often seems like coronavirus denialists have simply copied and pasted their talking points about climate change and adjusted the wording a bit to be about virus spread instead of carbon emissions.

But the basic parameters are the same: a worldwide conspiracy, threats that are invented or exaggerated for supposed political gain, a sinister hidden agenda — whether that's bringing down capitalism or ending Trump's presidency.

The content of coronavirus denialism can be somewhat diverse. This article from the New York Times chronicling the struggles of nurses to convince family and friends that the coronavirus is a real threat gives a good overview of the range of different flavors. Some folks insist the virus isn't real at all. Some accept that it's real but believe the danger of death or serious injury is being wildly exaggerated. Some deny that it's as communicable as public health officials believe. Some claim that deaths from other causes are being falsely attributed to the virus.

We see the same kind of diversity in the world of climate-change denialism. At first, conservatives flat-out denied that climate change or "global warming" was even happening. But as evidence for changing temperatures grew, the flavors of denialism did too, with some denialists claiming it was just a natural fluctuation not attributable to humans, others saying that the effects wouldn't be so bad, and still others saying it was too late to do anything about it so we should just give up.

What holds all these flavors of denialism together is the conspiracy theory undergirding them: The people raising the alarm about this problem are in cahoots with each other, and have ulterior motives.

Climate-change denialists have long held that progressives, and the scientists and world leaders who supposedly share their radical agenda, aren't really concerned about species loss or rising sea levels or the devastating effects on poor people or any of that. Instead, they argue, these concerns are being faked to create a justification for an all-out assault on capitalism and "freedom."

Similarly, coronavirus denialists argue that health care workers and scientists warning about the coronavirus are insincere, but instead are part of a larger — again, worldwide! — movement to take down Trump by making him look bad.

The rhetoric between the two forms of denialism is almost comically similar.

In September, Fox News host Laura Ingraham declared that teenage climate-change activists were part of a sinister plot to seize control of "our economy, our way of life, our way of transport, how many children you want to have."

In May, she made the same arguments about recommendations to wear face masks to slow the coronavirus spread, claiming it was about "control over large populations" that is "achieved through fear and intimidation and suppression of free thought."

In case the link wasn't obvious, Ingraham made it herself, saying, "They'll say this whole mask thing is settled science, just like they do with climate change."

It's not possible that both things are just settled science, of course. It's all just a massive conspiracy!

It's the same story with Fox News superstar Tucker Carlson, who argued last September that climate strikes are "not about the environment" but are a left-wing scam meant to create "an emergency big enough to justify grabbing more power."

Carlson copy-pasted those same arguments to deny the dangers of the coronavirus months later, claiming that the scientific evidence that it's dangerous and communicable is overblown, and being exaggerated by people who are hungry for "power" and want to see Americans following "orders."

Both climate change and coronavirus denialism are given a boost by the tribalist politics of right-wing America. For decades now, one of the ways for conservatives to indicate their skepticism of climate change and fealty to the right was to buy giant, gas-guzzling SUVs and trucks, making quite clear to anyone looking that they don't care one fig about your fears of carbon emission.

The same logic is driving the anti-mask phenomenon, where some of the most fiercely loyal Trump supporters make a big show out of refusing wear a mask, because they don't care one fig about your fear of catching a potentially deadly virus.

It was clever of Trump and his media followers to encourage his supporters not to wear masks. That kind of showy public defiance has helped normalize coronavirus denialism, and exerted pressure on other conservatives to follow suit to show their tribal loyalties. It serves the same function as mocking people for driving fuel-efficient vehicles did, using peer pressure to get people on board with a right-wing conspiracy theory.

Unfortunately, as we've seen with climate-change conspiracy theories, once they take hold, it's very hard to pry people free from their delusional beliefs. If you confront them with the evidence that the threat is real, they simply move to claiming it's overblown. George Soros will probably be blamed. Or they'll come up with excuses for why they personally won't be affected and so shouldn't care. Or they'll just shift to casting aspersions on the motives of people who do care, whether that's Greta Thunberg or Dr. Anthony Fauci, accusing them of being tools or power-hungry schemers. They'll embrace any view, really, except admitting that the problem we're all facing is real and that yes, we have to do something about it.