The Mad King Trump is fueling our national nervous breakdown 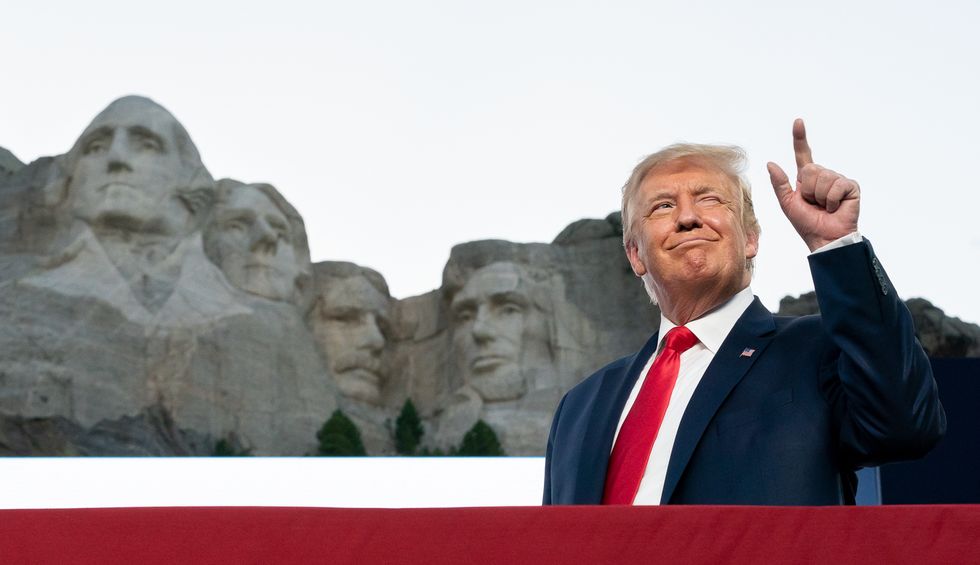 Normally, I wouldn't be at all concerned about a professional tabloid weirdo like Kanye West running for president. Today, however, I'm actually quite concerned, and not because I think Kanye is likely to win or even fumble his way onto enough ballots to make a dent. He won't. For now.

The problem with Kanye or other political hobbyists running for president is that it further erodes the already threadbare integrity of our presidential politics, making it increasingly acceptable for other famous-for-being-famous nincompoops to run, and perhaps win. The last four years have illustrated how profoundly dangerous that can be.

These days, the ground is especially fertile for dilettantes and tourists to run for national office. Even on the Democratic side, sparingly. There are myriad reasons for it, but chief among them is that we appear to be experiencing an American nervous breakdown — a societal form of psychological imbalance that's abundantly evident and worsening by the day.

It became blindingly noticeable in 2016, but during the course of this year in particular, our national freakout has worsened to a point where sound judgment has been dangerously inhibited, while reality and reason have become increasingly rare commodities, largely abandoned by at least 40 percent of us. America is engaged in a transcontinental meltdown and it's not getting better.

If you need evidence, take a look around you.

Alleged grownups are routinely scolding anyone wearing a mask, either because the mask wearers are, they say, succumbing to fear or because the mask wearers are merely doing it to express their disapproval of Donald Trump, whose existence as president, by the way, is more responsible than anything else for the breakdown. Trump has exploited the bully pulpit to undermine our national sense of right and wrong, of reality and fiction, to the point where his most loyal disciples — again, chronological adults — don't have any idea what's real and what's fake.

To wit: there was a video flying around Twitter over the weekend in which a Florida lawyer dressed up like the Grim Reaper was accosted by a possibly-intoxicated beachgoer who insisted that the coronavirus outbreak is a plot by China, via the Bidens, to screw Donald Trump. Another video showed a woman destroying a display rack of N-95 masks at a department store because something-something-QAnon. Likewise, a couple was captured on video painting over the yellow "Black Lives Matter" slogan on the street in the sleepy suburban town of Martinez, California, while blurting pro-Trump non sequiturs at astonished onlookers. It seems like there are new videos like these every hour on the hour, each one showing privileged white Americans in full catastrophic meltdown.

Sizable crowds of Trump supporters, along with party-going assemblies of younger people, are gathering together without masks and without social distancing in defiance of the virus, apparently believing the pandemic can be intimidated by patriotic American resolve, not unlike our national reaction to the terrorist attacks of Sept. 11, 2001. Hundreds if not thousands of these dinguses, along with the friends and family members they may subsequently infect, will end up burdening our already overburdened health care system because they were too selfish and irresponsible to do the right thing — to exercise some self-control, at least enough to make the reasonable choices required to end the pandemic. Instead, they're worsening it for everyone.

More than 130,000 Americans are dead on Donald Trump's watch. That's 32,500 times the death toll at Benghazi, or 44 times the 9/11 attacks. The United States now has the worst rate of new coronavirus infections in the world, also on Trump's watch and indeed directly attributable to the president's twisted, malicious, selfish insistence upon prematurely reopening the economy. Russia, meanwhile, reportedly paid bounties to Taliban fighters for killing American soldiers and Trump has yet to condemn his paymaster Putin, much less call for retaliatory sanctions. These are only the most recent tentpole news stories, not even taking into consideration hundreds of other examples of rank villainy, as well as the 20,000 lies this president has told since Inauguration Day. Yet somehow, amid all this, Trump is miraculously polling in the low 40s.

Why? The American nervous breakdown.

Presidents have always set the tone for the rest of the country. Donald Trump's continued insistence on reinforcing his racist, exclusionary, vindictive, obnoxious, necrotic and ultimately self-defeating brand is driving the nation toward a cultural and societal breaking point, and the gravitational pull of this decline seems to be strengthening by the day. Around 30 years ago, Trump stopped trying to build things and instead chose to build the only thing he's "good" at building: the Trump brand. From the early 1990s onward, he's been all about the things that compose his public persona, and he'll never deviate from that, even if he kills thousands of Americans while destroying the economy in the process.

Inside his warped one-track mind, the Trump brand will always take priority over everything else, and ever since March, that brand has been in direct conflict with the reality of the pandemic.

At some point earlier in the year, Trump was faced with a critical choice, as he saw it: either to make decisions that benefit the nation, or to prioritize his own brand with an eye on re-election. He could tell the truth about the seriousness of the virus and the difficult, sometimes painful things we'd have to do to flatten the curve, or he could continue to ignore all that while, like the mayor in "Jaws," downplaying the threat because it doesn't mesh with his always winning, always great, always tremendous brand.

Consequently, Trump chose to vilify responsible actions like staying home, mask-wearing and social distancing — characterizing those things as us-versus-them propositions, politicizing the crisis, and sending the message to his 40-percenters that this was all about the Democrats trying to destroy Trump. In a June interview with the Wall Street Journal, Trump actually said that mask-wearing was meant to "signal disapproval of him." No, it's actually about not getting the virus or spreading it to other people, but facts are irrelevant when confronted by the Trump brand, which mandates that all actions by Americans land in one of two categories: pro-Trump or anti-Trump. There's no such thing as a "nothing to do with Trump" category. Not to him.

Trump's nihilistic approach to the worst crisis of our time, which now includes pretending the virus doesn't exist other than as a vehicle to demonize his enemies, is short-circuiting the wiring inside the heads of his Red Hat fanboys, who are now witnessing their own people succumbing to the virus and trying to somehow square this brutal reality with the "everything's fine!" attitude coming from their addled messiah. No wonder they're losing their shpadoinkle — again, facts and Trump-fiction are colliding in their heads and they're powerless to recalibrate their bullshit detectors. The results, as we've all observed, have been explosive.

As long as the president relentlessly ejaculates screechy all-caps grievances into the atmosphere, his weirdly impressionable fans will continue to be inspired to do the same. As long as he markets in obvious lies and ludicrous conspiracy theories, his fans will continue to buy as fact every word emerging from a place of (undeserved and unearned) authority. As long as he sets an example of racism and misogyny, his fans will continue to reject the values of tolerance and empathy. Indeed, the Trump brand has gone viral and infected 40 percent of us, who won't easily return to the land of reality and responsibility any time soon. This is entirely by design. Trump understands the power of the Oval Office. Trump thrives on chaos and manufactures it. He both expects and requires that his followers adopt his corrosive behavior, not unlike sports fans wearing the colors of their favorite team. And they've become so intensely loyal to the brand that they're losing what's left of their minds to protect and defend it.

As for the rest of us, we all feel like we're leaning too far back in our chairs, almost falling over but not quite — that queasy feeling of impending doom, compacted between intense stress over our personal health and our personal finances, not knowing whether outside interference with the election combined with Trump's attempts to cheat will give us four more years of this national madness. The frenetic uncertainty we're enduring shouldn't be exacerbated by the existence of an unstable tyrant in the White House, but it is.

Trump's destabilizing and omnipresent existence, and especially the power this Mad King possesses, is the prime catalyst for this national nervous breakdown. There's one last remaining treatment: We must find the collective strength to electorally humiliate Trump and his brand out of existence. He must be resoundingly toppled in November. The alternative is unthinkable, but it could involve an eventual President Kanye West or President Joe Exotic at some point in our lifetimes — a possibility as inconceivable today as "President Donald Trump" was five or 10 years ago.