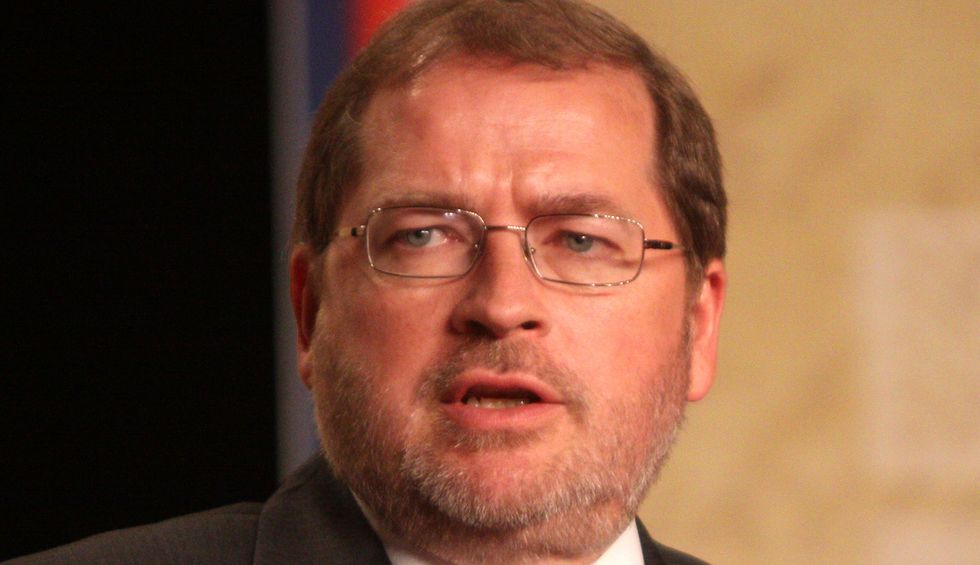 Newt Gingrich is usually, and rightly, blamed for destroying American politics, even more than Donald Trump. The former House Speaker didn’t go to Washington in the 1970s to strike deals. He went there to wage soft civil war against the United States.

But if there’s a close second to the title of America’s Worst Person, it probably goes to someone you never heard of. He’s not a politician. He’s not a pundit or bureaucrat. When it comes to influencing the GOP’s attitude toward taxing, spending and budgets, however, it would be hard to find someone more influential than Grover Norquist.

Norquist is the head of Americans for Tax Reform. The name is a misnomer. It doesn’t want to “reform” taxes so much as get rid of taxes on the very, very rich. Norquist is probably most famous for saying, in 2001, that he doesn’t want to abolish government per se. “I simply want to reduce it to the size where I can … drown it in the bathtub.”

While Gingrich was on the front lines of the soft civil war, armed with lies, slander and disinformation as his weapons of choice, Norquist was in the backrooms, pulling strings, pressing Republicans to pledge to never ever—never ever ever—raise taxes or be punished. The last Republican to raise taxes for the purpose of balancing responsibly the federal budget was George H.W. Bush, the last one-term president.

At some point, it’s hard to say when, Gingrich’s focus on language and Norquist’s focus on policy merged so that the Republicans always sounded like they were being responsible when calling for balanced budgets, but they were in fact being reckless. Why? Responsible budgets consider expenses as well as revenues. You can’t just ignore one if you’re being serious or responsible. Thanks to pressure from Norquist, however, the Republicans pretended revenues didn’t exist. And, alas, the Democratic Party usually went along. The result has been that for years most debates over budgets turned on the question of how much to starve a government of, by and for the people.

To be sure, this pretending was collective. Norquist’s group doesn’t care about the size of government. What it cares about is shoving the tax burden off the shoulders of the very, very rich while at the same time seeing the rich enriched with lucrative contracts. If that means huge deficits, so be it. Similarly, the Republican don’t care about deficits when Republicans are president. (Yes, Ronald Reagan raised taxes but he left office with the books well in the red.) Deficits only matter when Democrats are in charge.

All of this was clear to anyone paying close attention. Even so, Norquist in particular had plausible deniability on his side. Though budgets were swollen to bursting on account of irresponsible Republican attitudes, he and others could always say, well, we’re spending too much on wasteful expenditures. If we didn’t spend so much of what people don’t need—or on what people have grown dependent on—budgets and the government would be smaller and better. Plausible deniability meant his group always seemed to be at least somewhat principled, even to people paying close attention.

It seems to me the age of plausible deniability is over. Americans for Tax Reform, which was at the center the tea party movement that took over the Republican Party, applied for and received a Paycheck Protection Program (PPP) loan as part of an effort to stimulate the economy as it reels from the ongoing coronavirus pandemic. The guy who wanted to drown the government in a bathtub cried to help while drowning.

You could say, well, that’s OK. Everyone’s facing hard times. But everyone faced hard times during the financial panic of 2007-2008, too. Indeed, Barack Obama, after winning reelection, wanted George W. Bush-era tax cuts on the rich to expire in order to fund a multi-billion dollar jobs program. After 2012, when the GOP lost seats in the Senate, some Republicans felt pressure to play along—until Norquist stepped in. “We’ve got some people,” he said, “discussing impure thoughts on national television.”

The jobs program was shelved, almost certainly prolonging the Great Recession. Yet amid another historic crisis, here we see Grover Norquist of all people with his hand out. It’s not a lot, just $350,000 in forgivable loans. It’s the principle of the thing in that there are no and never have been principles guiding the fiscal conservative project. Only the idea that government is for the very, very rich, not of, by and for the people.

Norquist isn’t alone, of course. The Republicans were so hostile toward Obama’s economic agenda that they brought the country to the brink of insolvency by refusing to lift the debt limit. And yet Republican members of Congress and the president’s family business got access this month to $660 billion in forgivable PPP money, as did 90,000 well-connected businesses that promised to save zero jobs in the bargain.

Sabotage was good politics when Obama was in charge. With Trump, it’s belly up to the trough. This should matter to white swing voters after the election. The Republicans will try reupping the con. They will say they fight for them. They don’t. They are waging soft civil war. While that was never obvious, it should be clear now.

John Stoehr is the editor and publisher of the Editorial Board, a newsletter about politics in plain English for normal people and the common good. He’s a visiting assistant professor of public policy at Wesleyan University, a fellow at the Yale Journalism Initiative, a contributing writer for the Washington Monthly, and a contributing editor for Religion Dispatches.