Republican senators are suddenly trying to social distance — from Trump 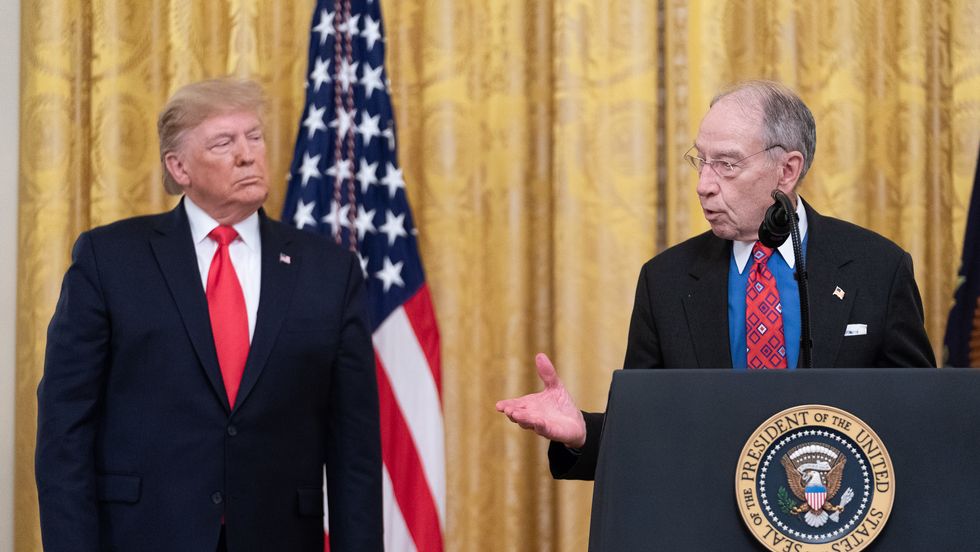 There’s something interesting in today’s news:

A number of Republican Senators have said they are skipping the Republican National Convention this year. The convention was originally scheduled in Charlotte, North Carolina, but at Trump’s insistence was relocated to Jacksonville, Florida, last month. The stated reason was that Democratic North Carolina Governor Roy Cooper would not commit to permitting a full convention out of concerns about the spread of coronavirus, but the abrupt switch to Florida, less than 80 days before the convention, still seems odd to me. Regardless, the switch has created a new problem: Florida is in the midst of a dramatic spike in coronavirus cases, setting a record for new cases in a single day during the weekend —11,458—and running low of ICU beds.

Senators are using the dangers of the coronavirus to distance themselves from the president. Chuck Grassley (R-Iowa), at 86, the oldest Republican senator, said he would not go. Senator Lamar Alexander (R-TN) is staying home because, his spokesperson says, “he believes the delegate spots should be reserved” for people who have not attended before. Senator Lisa Murkowski (R-AK) is not going; neither is Susan Collins (R-ME). Mitt Romney (R-UT) won’t be showing up either. The coronavirus gives them an excellent excuse to socially distance themselves from the president.

This distancing is a sign that Republican leaders are uncomfortable with Trump’s behavior and are hoping to save Republican control of the Senate as his polls slip. They are also trying to downplay the story that Russia’s military intelligence unit, the GRU, offered bounties to Taliban fighters to kill Americans and allied forces, even as the administration has responded to the story not by retaliation against Russia, but by searching to expose the person who leaked the story to the media.

For his part, Trump is more aggressively asserting his power to defend his own vision of America. Determined to find a scapegoat for his own botched response to the coronavirus, Trump today officially notified the United Nations that America will be withdrawing from the World Health Organization, effective on July 6, 2021.

Trump publicly blames the WHO for the spread of the virus because, according to Trump, it worked too closely with China. Lawmakers of both parties condemned the move. Lamar Alexander (R-TN) chair of the Senate Health, Education, Labor and Pensions Committee said: “Withdrawing U.S. membership could, among other things, interfere with clinical trials that are essential to the development of vaccines, which citizens of the United States as well as others in the world need…. And withdrawing could make it harder to work with other countries to stop viruses before they get to the United States.”

Meanwhile, the European Union has reopened its borders to travelers from a list of countries where the coronavirus is now under control. The United States is not on the list, meaning Americans cannot travel to the EU, but China, which has brought the coronavirus into control, is. Still, Trump insists that those opposing the reopening of schools as new cases of infection are spiking are doing so only to hurt him politically. While he cannot order schools to open, he said today “We’re very much going to put pressure on governors and everybody else to open the schools, to get them open.” Trump is eager to reopen schools both to enable parents to go back to work and to suggest everything is back to normal, even as coronavirus infections continue to rise. As of today, the United States has had more than 3 million cases of Covid-19.

The administration continues to court its base with a racist vision of the country. Yesterday, Republican National Committee spokeswoman Liz Harrington criticized presumptive Democratic presidential nominee Joe Biden of advancing “radical left socialism” for saying that “Independence Day is a celebration of our persistent march toward greater justice — the natural expansion of our founding notion from ‘all men are created equal’ to ‘all people are created equal and should be treated equally throughout their lives.’”

On the same day, Trump tweeted an attack on Black racecar driver Bubba Wallace, accusing him of advancing a “HOAX” because someone (not Wallace) had found and reported a noose hanging in his garage. In the same tweet, Trump expressed outrage that NASCAR has banned the use of the Confederate flag at its events. (Republican strategist Karl Rove told the Fox News Channel the president’s defense of the Confederate flag did not help his campaign.)

Then, out of the blue, the official White House Twitter account published a photo of Trump and Pence apparently gazing in to the sky, alongside a quotation that said: “Americans are the people who pursued our Manifest Destiny across the ocean, into the uncharted wilderness, over the tallest mountains, and then into the skies and even into the stars.” Manifest Destiny was a term coined in the 1840s by the editor of the Democratic Review magazine to explain why it was the divinely ordained duty of Americans to push west and take over the lands of indigenous peoples and Mexicans, spreading slavery into new lands. The term is widely associated with white supremacy and deadly dominance over people of color.

Meanwhile, the administration continues to move public money toward its supporters. Government data released this week shows that tax-payer funded bailouts went to churches whose leaders are Trump’s allies, as well as organizations traditionally opposed to government programs. Anti-tax advocate Grover Norquist’s Americans for Tax Reform Foundation received between $150,000 and $300,000 in loans, while Norquist took a stand against the unemployment insurance in the CARES coronavirus relief act. The Ayn Rand Institute, named for the theorist who opposed government welfare programs despite using them herself, took a loan of between $350,000 and $1 million, calling it “partial restitution for government-inflicted losses.” Multiple businesses close to Trump got money, too; the government loaned as much as $273 million to more than 100 companies with ties to the president.

Also today, excerpts from the book written by Trump’s niece, Mary L. Trump, appeared in the media. Trump tried, unsuccessfully, to stop the publication of the book. The excerpts don’t say much we didn’t already know, but the inside story of the Trump family is likely to get under the president’s skin. Dr. Trump, who holds a doctorate in psychology, portrays the president as a habitual liar who paid someone to take the SAT to get him into college. She shows a narcissist who can think only in terms of himself, and who is calculating and cruel to the point that he was willing to take away health care from a baby in order to gain leverage over his nephew.

After her dissection of Trump’s dangerous personality, Dr. Trump concludes that Trump himself “isn’t really the problem after all.” The problem is his enablers, including the Republican Senators who voted five months ago to acquit him of the charges for which the House of Representatives impeached him.

That those same Senators are now begging off from the upcoming Republican convention is too little a protest, too late.