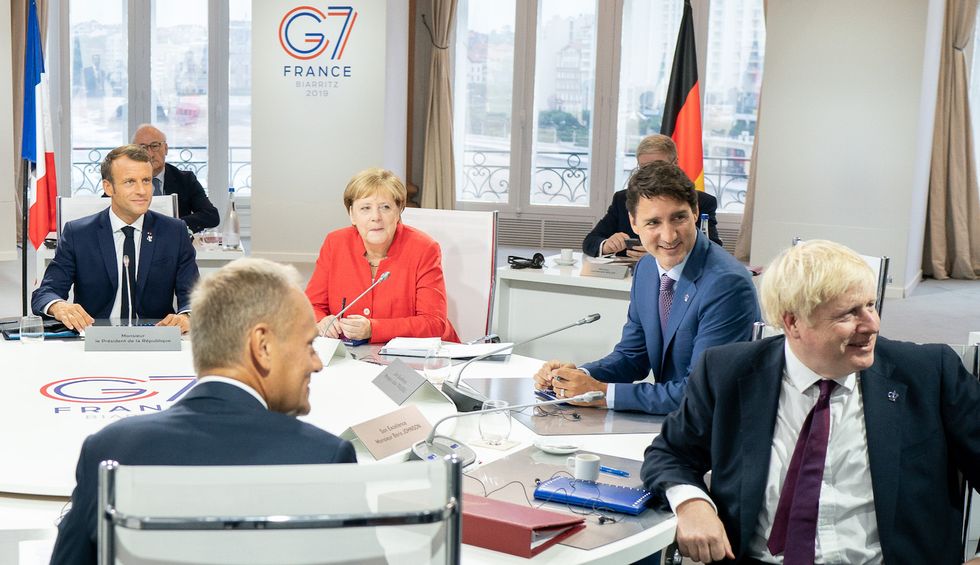 Donald Trump campaigned on the claim that the United States was not respected in the world. That it was being laughed at. That other nations considered our country "weak."

Three hundred years and one utterly failed pandemic response into Trump's administration, the world really is laughing at us. Polls show that 64% of people around the world have "no confidence" in Trump as U.S. leader, and even that is being held down by Trump's approval ratings among worldwide fascists. We are absolutely seen as "weak"—and rightly so.

The Washington Post's latest write-up notes a variety of factors, all of them well-known at this point. The U.S. response to the COVID-19 pandemic has been absolutely catastrophic—an incompetent farce blending fascist administration assurances that all is well with a complete inability to manage preparedness, testing, contact tracing, or any unified policies at all. Other nations are returning to normal as rigorous case tracking keeps local outbreaks small and contained; here, caseloads have skyrocketed. Policies remain little different from those in March, or April.

On the foreign policy front, there is none. Trump has no foreign policy other than grift. He insults friendly world leaders as an uncontrollable personality trait. He waffles back and forth on military matters and alliances according to whatever he has last seen on television or who he has last spoken to, betraying Kurdish allies in Syria as result of a single conversation, threatening South Korea and other nations with the withdrawal of U.S. troops if they do not pony up cash on his say-so, and being contemptuous of female women leaders for no reason other than his own obsessive misogyny.

There is likewise no diplomacy in the Trump era, as in none at all; the State Department and its secretary have zero power to negotiate anything that the incompetent leader will not himself reverse days later. It is a paper tiger. The United States cannot argue itself a champion of democracy because we are plainly not; the administration doesn't give a flying damn about human rights, and the world has ample quotes to prove it.

The Department of Justice is brazenly corrupt. Any notion of U.S. leadership when it comes to either the treatment of journalists or the apolitical application of law is a joke.

It's not even remotely surprising that citizens in other nations are looking at this orange buffoon and his inept, flailing minions and deeming the United States flighty and unreliable. Most people in the world are not pathological about these things. You can't put a leader on the world stage and have him publicly fail at everything, finally culminating in the very public botching of a worldwide pandemic that most large non-authoritarian nations have brought under at least tenuous control, and have nobody notice.

Other nations don't have Fox News, for starters. They don't have that steady stream of public propaganda propping Trump up.

The Post also notes that as the world loses confidence in the United States as a reliable (or even moderately sane) international partner, China is benefiting the most. That's also to be expected; dealing with China has some harsh conditions of its own, but nations needing aid can be relatively sure the conditions will not change from week to week based on a malignant narcissist's television habits.

The real question is how lasting this damage will be. Hollowing out the State Department will take time to repair, but even the most competent new administration will of necessity be changing United States foreign policies back to what they were before all this [string of unprintable expletives] happened, and there's no credible way for any future administration to assure allies things will not go immediately down the tubes again, a few more years down the line.