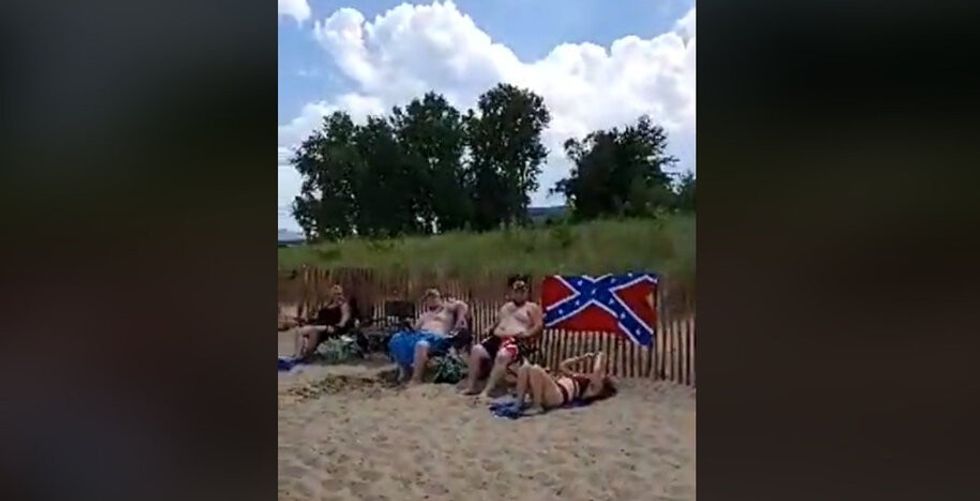 When LaShandra Smith-Rayfield saw a picture circulating on social media of a group of white people with a Confederate flag beach towel hanging on a fence behind them at her local beach in Evanston, Illinois, she decided to go check it out. When she found the group, still with their symbol of hate hanging proudly behind them, it turned into a roughly 10-minute standoff that’s gotten more than 143,000 views on Facebook within a day. Because Smith-Rayfield was not backing down.

“That flag right there is my swastika. You put it up on this beach, yes, I'm going to come out every single freakin' time to tell you they lost the damn war. This is the United States of America, not the Confederacy of America,” she said. While the group did take down their towel so it wasn’t hanging out for all to see, they weren’t apologizing or acknowledging the racist damage they had done, and she wasn’t letting them off the hook for it as long as what they were doing meant “I can’t feel comfortable in my own neighborhood.”

Early on, as she challenged the white group about their symbol of hate, a man who appeared to be a person of color took their side, saying he had served in the military “to defend this flag.”

“No you didn’t, you fought to defend a flag that had 50 stars on it,” Smith-Rayfield shot back.

“I’m not going to argue with a man of color about that flag, it’s stupid,” she said, as the man continued heatedly defending the right of white people to display the Confederate flag. When he said that she, not the racists, was the one bothering people, Smith-Rayfield said of the Confederate flag: “It should bother everyone on this damn beach.”

“That right there is a racist symbol of hate. My question to you is, how does that flag hold any relevance to you today in this country today? You vote in elections that have 50 stars on the flag. What does that flag have to do with today? If you aren’t a racist, then why are you holding that flag up?”

At one point, Smith-Rayfield even offered to buy the towel from the group, proffering $20 and suggesting that if it was really just a towel to them, not a symbol, that was a good deal for them. They didn’t take it. Because quite obviously it was not just a towel for them. These people wanted attention, which is also why they had one and only one of their towels hanging on the fence. One of the racists at one point accused Smith-Rayfield of wanting attention, but they were very clearly out there trying to draw attention to hate.

Before Smith-Rayfield arrived at the beach, Evanston Mayor Steve Hagerty had seen reports of the flag being displayed, had gone and looked and, not seeing it, had declared the reports fake news. Later, he acknowledged that it had in fact been displayed but said a beach supervisor asked them to take the flag down. After Smith-Rayfield’s video spread, he apologized and described it as “a great example of confronting hate,” adding: “Her courage and persistence is admirable and an example for all of us.”

Also after Smith-Rayfield left the beach, a group of protesters arrived with Black Lives Matter signs and stayed until the racists left. A rally against racism is planned for July 31 at 2 PM ET on Lighthouse Beach in Evanston, Illinois.

But this video is simultaneously wonderful as an example of courage and awful because you can absolutely hear the toll the encounter takes on Smith-Rayfield, a teacher and mother of four and, for me, a high school friend. She stands strong, but her voice cracks. She struggles not to scream or swear or do anything that would make her the unreasonable person in the encounter—something she’s been accused of in hateful comments nonetheless. And what you don’t see until the end of the video is that she was accompanied by her teenage children.

This kind of fortitude should not be required of people to assert their basic humanity and right to enjoy their neighborhood beach without being confronted by symbols of the enslavement of their ancestors. This kind of composure should not be necessary in the face of indolent, smug bigotry like those white beachgoers displayed. And, as she said when a white onlooker apologized to her as she left, “I don’t need apologies, I need action.”

No one was physically injured. No one was arrested for the crime of Blackness. But this act of racism still hurt people.