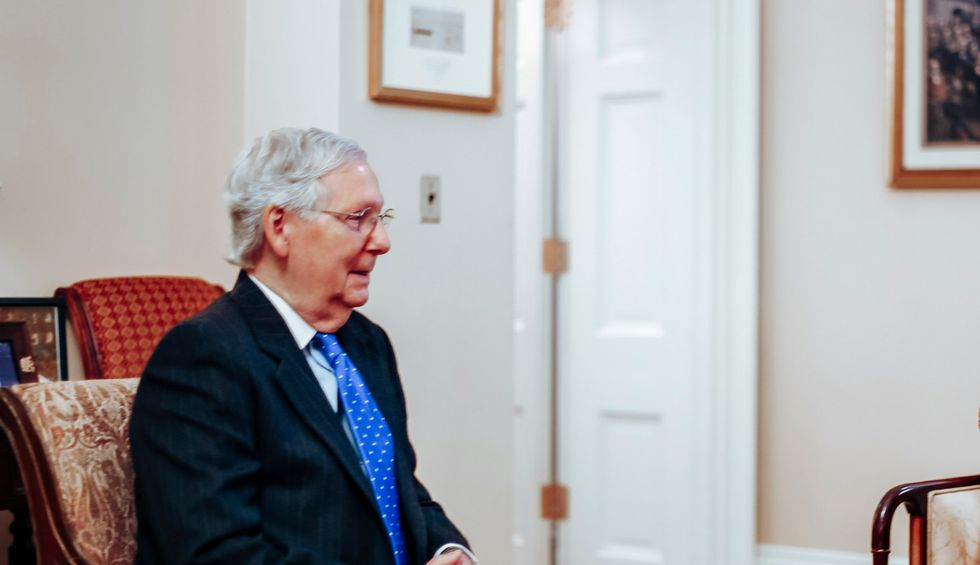 Progressives are accusing Senate Majority Leader Mitch McConnell and President Donald Trump of pulling out all the stops to suppress the vote in November after new details of the Republican coronavirus stimulus plan revealed it does not propose a single dollar in election assistance funding.

A summary (pdf) of the Republican plan obtained by the New York Times Thursday doesn't mention election funding directly, but it does note that the GOP relief package will propose "no additional money for state/local governments."

The draft adds in a parenthetical, "Certainly expect to get some [funding] added in negotiations with the Dems."

"It is outrageous that this proposal contains not one penny to help states conduct safe elections during a global pandemic," Sean Eldridge, founder and president of Stand Up America, said in a statement. "Policymakers should be doing everything they can to ensure voters are not forced to risk their health to cast their ballot."

"Instead," Eldridge said, "it seems Mitch McConnell is doing everything he can to suppress the vote by putting voters in danger."

Stand Up America and other voting rights groups are demanding that Congress approve $3.6 billion in election assistance funding—a fraction of the $21.3 billion the GOP plan proposes handing to the Pentagon on top of the agency's likely $740.5 billion budget for fiscal year 2021.

The Republican plan, which is being crafted in McConnell's office in partnership with the Trump White House, has not yet been finalized and the details could still change.

Voting rights advocates say the election assistance money is necessary to help states expand vote-by-mail and ensure that in-person polling places are adequately equipped and prepared to safely hold a general election amid a pandemic.

Failing to approve election funding, progressives warn, could drive down turnout in November by limiting voters' ballot options in an environment where it is potentially dangerous to vote in person.

Want to feel your health is being prioritized when you vote this November? Call your senator. The Senate is comin… https://t.co/zhAOfGN7Dk
— Stand Up America (@Stand Up America)1595526306.0

Trump's repeated and baseless attacks on mail-in voting as well as his refusal to commit to accepting the results of the 2020 election have added urgency to progressive efforts to ensure a safe and fair contest. On Thursday, Stand Up America and Indivisible announced that 30 new advocacy groups have joined the grassroots campaign preparing to mobilize should Trump refuse to leave office.

"Together, we will ensure that every vote is counted and that we protect our democracy," said Cristina Jimenez, executive director and co-founder of United We Dream Action, an immigrant rights group.

In May, House Democrats passed legislation that would provide more than $1 trillion in funding for state and local governments—including billions in election assistance money—as they face pandemic-induced budgetary crises.

Eldridge said Democratic lawmakers must do everything in their power to ensure that adequate election assistance funding is included in the stimulus package that eventually makes its way through Congress.

"Democrats in both chambers cannot allow Republicans to threaten the foundation of our democracy—and they must use every piece of available leverage to ensure election funding is included in a final brokered deal," said Eldridge. "Nothing less than our democracy is at stake."