'Joe, are the Russians bad?': Here are 5 revealing details from new records of Trump's intel briefing 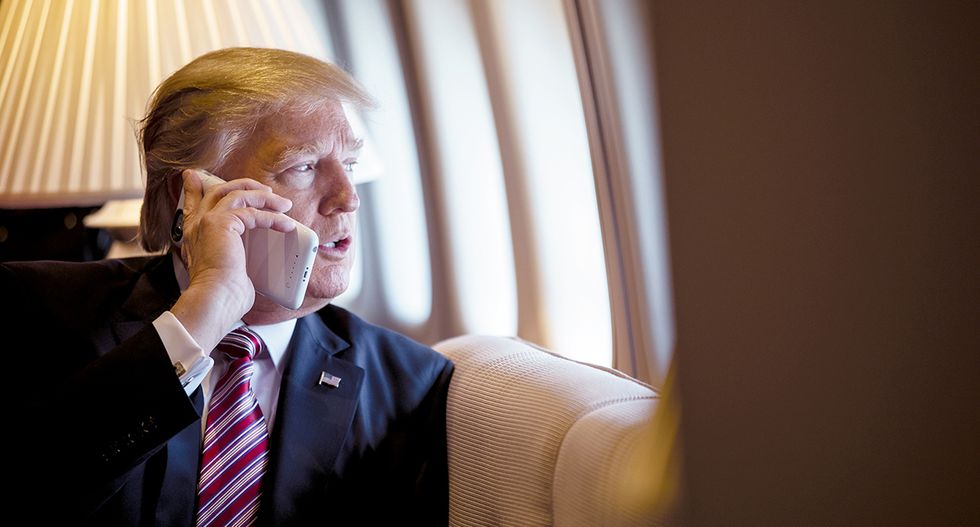 President Donald Trump talks on the phone aboard Air Force One during a flight to Philadelphia, Pennsylvania, to address a joint gathering of House and Senate Republicans, Thursday, January 26, 2017. This was the President’s first Trip aboard Air Force One. (Official White House Photo by Shealah Craighead)
Cody Fenwick
July 24, 2020World

A new document declassified by the Office of the Director of National Intelligence gives a new glimpse into Crossfire Hurricane, the investigation that was eventually taken over by Special Counsel Robert Mueller.

It records the notes of an FBI briefer who discussed foreign intelligence threats with then-candidate Donald Trump, Chris Christie, and Michael Flynn in August of 2016. The nature of the briefing has previously drawn scrutiny. While it was largely conducted as a typical security briefing of a presidential candidate, it was also carried out by a briefer involved in the investigation of associates of Trump's campaign — including Flynn. Though not illegal or against official rules, critics have objected that it was inappropriate for the FBI to use a security briefing for purposes that the candidate himself was not aware of.

DNI John Ratcliffe presumably declassified the document to further the aims of Trump's allies who are seeking to discredit Crossfire Hurricane and the broader Russia investigation. It doesn't really present much new ammunition on that front, though, since the basics of the briefing were already known.

But here are five revealing details that the records contain:

When the briefer, Joe Pientka, informed Trump of the nature of the Chinese and Russian counterintelligence threats, the candidate responded with this seemingly naive question. He continued, referring to the fact that the Russians had comparatively more intelligence officers in the U.S.: "Because they have more numbers, are they worse than the Chinese?"

Pientka responded by saying they are both bad.

"The numbers of [intelligence officers] present in the U.S. is not an indicator of the severity of the threat," he noted.

2. Trump was warned about what happening, despite his claims

In the midst of the Russia investigation during his presidency, Trump claimed that he was never warned by the FBI of the threat posed to his campaign and the election more broadly:

As the documents make clear, though, Trump was warned explicitly that the Russians would likely try to recruit his associates and potentially infiltrate his campaign:

In the classical sense, an [intelligence officer] will attempt to recruit an individual to tell him or her the things he or she wants to know. This is known as HUMINT. It is highly unlikely a Foreign Intelligence Service will attempt to recruit you, however, you need to be mindful of the people on your periphery: your staff, domestic help, business associates, friends, etc. Those individuals may present more vulnerabilities or be more susceptible to an approach. Those individuals will also be targeted for recruitment due to their access to you. That does not mean [intelligence officers] will not make a run at you. They will send their [intelligence officers] in diplomatic cover, businessperson NOCs, as well as sources they have developed around you to elicit information and gain assessment on you.

Given the voluminous contacts between Trump campaign officials and Russia, it's likely this is exactly what happened.

It is true, though, that Trump was never specifically warned about the threats under consideration by the Crossfire Hurricane investigation.

In a moment revealing the shallowness of Trump's understanding of cybersecurity, the candidate compared the threats from foreign intelligence to his youngest son:

Yes, I understand it’s a dark time. Nothing is safe on computers anymore. We used to lock things in a safe in a room. Now anyone can get in. My son is ten years old. He has a computer and we put a codeword on it. Within ten minutes he broke the codeword and we needed to put another one on the computer. Kids are genius.

4. Trump was given specific instructions about cybersecurity that he clearly never listened to.

[Pientka] followed up by stating, in addition, you should not only consider how you communicate but where you communicate sensitive or personal information. Foreign Intelligence Services will develop a pattern on where you hold private meetings or discussions. They will attempt to determine if the location is a meeting room, kitchen, bedroom, vehicle, etc. Once a pattern is established they will attempt to exploit that location technically.

Despite these specific instructions — and he has doubtless received similar and more elaborate guidance since then — Trump has repeatedly violated best practices for avoiding foreign surveillance.

5. "During the ODNI briefs, writer actively listened for topics or questions regarding the Russian Federation."

The document was filed as a part of the Crossfire Hurricane investigation, and Pientka noted that he was specifically conscious of mentions of Russia during the briefing. None of the comments from Trump's side of the briefing seem particularly noteworthy with regard to the investigation.

However, as Justice Department Inspector General Michael Horowitz has argued, it was unwise to have someone involved in an investigation of individuals close to Trump conduct the candidate's security briefing. This could prevent a conflict of interest, or at the very least, make candidates potentially suspicious of their briefers. For these reasons, Horowitz has recommended that the department specifically set guidelines restricting this sort of conduct.