Is the conservative Federalist Society rewarding Susan Collins for her Kavanaugh vote? 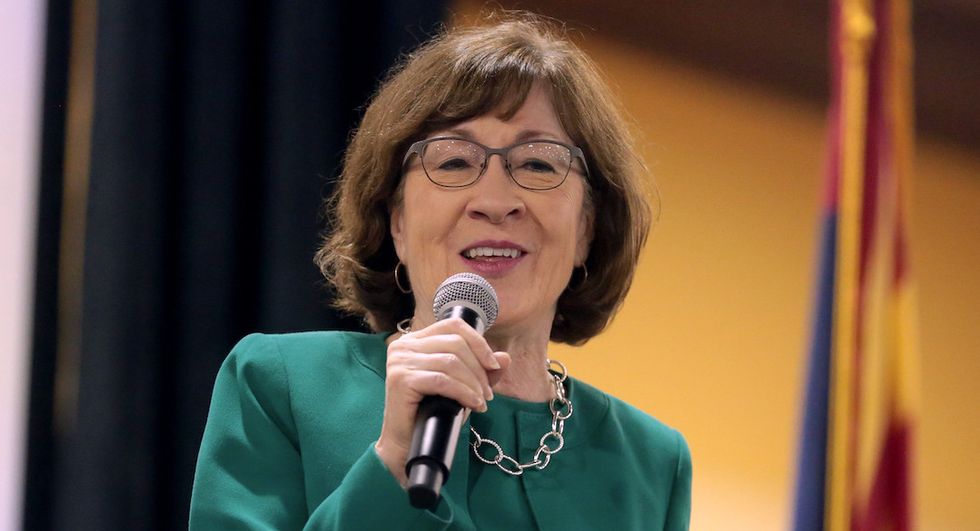 Gage Skidmore
Roger Sollenberger
and
Salon
July 11, 2020Election '20
The Federalist Society, the conservative legal group that pushed Supreme Court Justice Brett Kavanaugh's appointment, has been the biggest contributor to the re-election campaign of Sen. Susan Collins, the embattled Maine Republican, since she voted to confirm him, federal filings show.

Donors associated with the Federalist Society, which has supported numerous other right-wing federal judges appointed by President Trump, have contributed more than $300,000 to Collins' campaign and related political action committees over the last 18 months. That's more than executives and employees at General Dynamics, the second-largest contributor to Collins, have contributed during her entire Senate career.

Those campaign contributions poured in after the Federalist Society and its affiliates waged a multi-million-dollar campaign to ensure Kavanaugh's nomination shortly after receiving a secretive $17 million anonymous donation, according to the Center for Responsive Politics. The effort prevailed, barely, after Collins cast a pivotal vote in Kavanaugh's 50-48 confirmation.

That vote led to a massive crowdfunding campaign that raised more than $4 million in advance for Collins' eventual Democratic challenger. Collins decried the effort as a "quid pro quo" that was the "equivalent of an attempt to bribe me to vote against Judge Kavanaugh."

Senate Majority Leader Mitch McConnell, R-Ky., vowed after the Kavanaugh vote that "Collins will be well-funded." as well after her vote. According to the Portland Press Herald, "huge sums" of out-of-state money poured into the 2020 Senate race between Collins and Gideon.

The Daily Beast previously reported that major donors to the Federalist Society had contributed more than $200,000 to Collins' re-election effort. Many of them had never donated to Collins before.

Federal filings reviewed by Salon show that the total contributions from Federalist Society executives and supporters now exceed $300,000. The group's executives and backers have donated at least $210,650 to the Collins for Senator campaign committee, $49,400 to Collins' leadership PAC and another $41,800 to the Collins Victory Committee.

Since the end of 2018, Federalist Society contributions dwarf those Collins has received from employees at the defense contractor General Dynamics, which had been her biggest financial backer, over the past 25 years. Employees at the company, whose Bath Iron Works is the fourth-largest private employer in Maine, have contributed at least $201,838 to Collins and related PACs going back to 1995, according to data from the Center for Responsive Politics.

A spokesman for Collins accused Salon of "political bias" in response to questions about the donations.

"The Maine Senate race is currently the most expensive in the country, and our campaign continues to be significantly outspent by far-left special interest groups that are spending money on what independent fact-checkers have repeatedly found to be 'mostly false' and misleading ads," said Collins spokesman Kevin Kelley. "Senator Collins' eventual challenger will also receive $4.1 million in CrowdPAC money — the outcome of an attempt to bribe her into voting against Justice Kavanaugh's nomination. Senator Collins cannot be bribed and she made up her mind based on the merits of the nomination. It's entirely laughable that the same people who tried to buy Senator Collins' vote for more than $4 million would now suggest that she sold her vote for far less."

Collins' new backers linked to the Federalist Society include Steven Calabresi, who has been the chairman of the group's board of directors since 1986, and conservative activist Cleta Mitchell, a Federalist Society member who made her first donation to Collins on the day Kavanaugh was confirmed.

Leonard Leo, the Federalist Society's executive vice president, and his wife each contributed the maximum $5,600 to Collins' campaign committee last year. Leo also held a fundraiser for Collins at his $4 million summer mansion, which he purchased the same month Kavanaugh was confirmed. That fundraiser appears to have triggered a wave of donations from the group's backers.

Collins was greeted by protesters at the event. "Coming for your bribe?" one sign said.

Collins sounded "exasperated" when questioned over the donations, according to Bloomberg reporter Steven Dennis.

"So I went to a 20-person fundraiser," she said. "It's just ridiculous, absolutely ridiculous."

The attendees included C. Boyden Gray, a Federalist Society board member. Gray previously donated $3,600 to Collins during her 2014 campaign but this time contributed $10,600 to the Dirigo PAC, Collins' leadership PAC.

A week after the fundraiser, Neil Corkery, an executive at the Judicial Crisis Network, donated $10,200 to Collins' re-election bid.

That same month, Reginald Brown, who sits on the Federalist Society's board of visitors, contributed $2,800 to Collins' campaign.

Diana Davis Spencer, who also sits on the board of visitors, made her first contribution to Collins with three donations totaling $5,600 within a month of Kavanaugh's confirmation.

Ted Olson, another member of the board of visitors, donated $2,000 to Collins since Kavanaugh's confirmation, though he also donated to her campaign in 2007 and 2014.

Daniel Casey, president of the Judicial Crisis Network, also contributed the maximum $5,600 to Collins' campaign, his first-ever donation to the senator. The group also launched a six-figure ad campaign to thank Collins for supporting Kavanaugh.

The Federalist Society's donors have contributed more than $250,000 to Collins-related PACs. Some of the backers are so-called Madison Club Platinum supporters, who donate $100,000 or more annually to the Federalist Society. These members contributed $78,500 to her re-election effort. None of the contributions came from Maine residents and many of the donors had never previously given money to Collins or her associated PACs.

These include Home Depot co-founder Bernard Marcus and his wife, who contributed $20,800 to the Dirigo PAC last year, more than 10 times the amount the couple had donated to Collins in 2014.

Thomas Smith, the managing partner of Prescott Investments, donated $20,000 to the Collins campaign, the Dirigo PAC and the Collins Victory Committee in 2019.

Roger Hertog, the former president of Alliance Capital Management, and his wife contributed $15,300 to Collins' campaign committee and the Collins Victory Committee in 2019.

Ravenel Curry, the founder of Eagle Capital Management, made two donations totaling $5,600 in 2019. David and Debra Humphreys, whose EL Craig Foundation is a major backer of the Federalist Society, also donated the maximum $11,200 to her campaign. Rex Sinquefield, the co-founder of the libertarian-leaning think tank the Show-Me Institute, also donated the maximum $5,600 in 2019.

Several Federalist Society Madison Club Gold donors, who contribute between $50,000 and $99,999 annually, donated another $20,100 to Collins after her vote.

Energy tycoon Philip Anschutz, whose foundation is a major Federalist Society backer, donated a total of $11,200 to Collins' campaign and the Collins Victory Committee. Attorney Anthony De Nicola donated $5,600 to Collins in 2019. Michael Boskin, the president of the Koret Foundation, a major funder of the Federalist Society, donated another $2,800. None of the three had ever donated to Collins in the past. Mary Elizabeth Weiss, the wife of hedge fund manager Richard Weiss, donated an additional $500.

A few Federalist Society Madison Club Silver donors, who contribute between $25,000 and $49,999 annually, donated another $53,600 to Collins' re-election effort.

Beyond Kavanaugh, the Federalist Society has been the driving force behind Trump's federal judicial appointments. Leo has been called "Trump's judge whisperer." Despite Collins' claim to be pro-choice, she has voted to confirm dozens of anti-abortion judges since Trump took office and has voted to confirm more than 100 judges nominated by the president.

Collins' campaign rejected the idea that the senator was "bribed" for her vote and said it was hypocritical to criticize her given the crowdfunding campaign against her. But Amelia Penniman, a spokeswoman for the Democratic super PAC American Bridge, argued that Collins' recent finance reports include a "who's who of the conservative judicial activists who brought us Brett Kavanaugh and have stacked the court with Trump's anti-choice judicial picks."

"This isn't a coincidence, they're supporting her because they know Collins is a reliable vote for their extreme nominees," she told the Maine Beacon. "The further she leans into her relationship with conservative DC power players like Leonard Leo, the more she puts Mainers on the back burner."

While Collins' support for Kavanaugh and conservative judges may have resulted in a surge of Federalist Society cash, it has not been nearly enough to keep up with leading Democratic challenger Sara Gideon, the speaker of the Maine House of Representatives.

Collins is one of the most vulnerable Republicans heading into the 2020 election. Gideon has held a slight lead in every poll released this year as Collins' support among women voters has evaporated. Collins, who won her last race in 2014 by 37 points, has seen her approval rating plummet from 67% when Trump took office to just 36% this month. She is now rated as the most unpopular senator in the country.

"Susan Collins sold out Mainers when she voted to give an accused rapist a lifetime appointment to the Supreme Court, and his backers have since rewarded her in turn," Zach Hudson, a spokesman for American Bridge 21st Century, said in a statement to Salon. "But all the money in the world from right-wing special interests cannot change the simple fact that Susan Collins lost the trust of Maine voters which is why she's now America's most unpopular senator. Collins' vote for Brett Kavanaugh may have bought her millions in special interest cash, but in November it will cost her her Senate seat. We hope she thinks it was worth it."