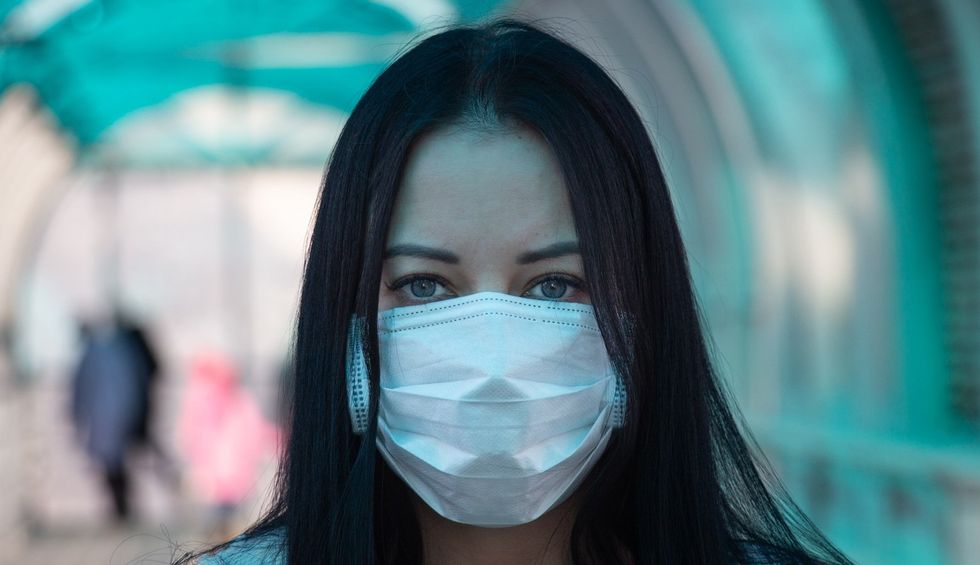 Drug Addiction Clinic VitaWhen using on the Web, a hyperlink to https://www.vperemen.com/ is appreciated. / CC BY-SA
Sophia A. McClennen
and
Salon
July 26, 2020 The Right Wing

Every day there is more data to prove the dangers of the coronavirus. Yet, bizarrely, the more proof we have of the damage of the pandemic; the more vicious and hysterical its deniers. It is hard not to be overwhelmed by the sheer volume of uninformed, deluded ideas covidiots spew on a daily basis. We mourn not just the lives lost and the bodies damaged, but the collective intelligence of our nation. With international news consistently depicting the United States as the dumbest nation in the developed world, it is as if news of the covidiocy is almost as depressing as news of the virus's spread itself.

The trend to what is described as America's move from freedom to "freedumb" has sadly been a long time in the making. The pandemic only painfully reveals a process that was well-documented by Charles Pierce's 2010 book "Idiot America: How Stupidity Became a Virtue in the Land of the Free."

Pierce opens with a story of Americans descending on the Creation Museum in Kentucky, where homeschooled children on field trips can behold a dinosaur wearing a saddle. With stories like these it is not hard to understand how this country lost its grip on even the most basic scientific concepts. It is not a big leap from dinosaurs in saddles to believing that face masks make us sick.

Shortly before the 2016 election we started to hear that part of the problem with America's stupidity was the fact that social media allows us to exist in information silos or echo chambers where our ideas aren't challenged and where we get a daily dose of confirmation for our brand of personal wackiness. Surely, information silos are a problem, but as the pandemic deniers have shown, there is actually a fairly diverse array of covidiocy types.

In fact, when we lump all pandemic deniers together into the same pile, we miss the fact that what plagues America on a cognitive level is a far more serious disease, one that has neither one symptom nor one easy cure. Here are five main types of covidiots to look out for:

You'd think all you'd need to do with an eye roller is show them the inside of an ICU or have them hear stories from those who have been gravely sickened by the virus. But the key to the eye roller is that they aren't going to believe a single piece of evidence because, from their view, all proof of the dangers of the pandemic is manufactured to produce hysteria.

The eye roller is disturbing for the fact that they have a long history of not taking a single critical issue in this nation seriously. So, coupled with their eye rolling over what they perceive as coronavirus hype, they are also likely to believe that we have no racism, no sexism, in fact, no significant problems whatsoever.  For them, liberals manufacture issues that aren't real so that they can create social anxiety and elevate their policy platform. These are the people who disparage the Black Lives Matter movement as reverse racism and mock #MeToo as a problem of thin skin.

The shoulder shruggers are your Ayn Rand-style covidiots. These folks get the numbers and the science. They have a full sense of the dead bodies and damaged lungs, but they simply don't care. They epitomize the "profit over people" worldview.

This is the line of reasoning we saw on display by Texas Lieutenant Governor Dan Patrick who suggested that grandparents should be willing to die in order to save the economy for their grandkids: "My message: let's get back to work, let's get back to living, let's be smart about it, and those of us who are 70-plus, we'll take care of ourselves." According to him, there is no reason to "sacrifice the country" in order to save a few old people.

Like the eye rollers, the shoulder shruggers have a far more pernicious mindset that shapes their views on a wider set of concerns than the virus. These are the folks who see in the virus neoliberal opportunities to capitalize rather than empathize.

The hedonists simply don't want to be inconvenienced by the virus. They want their manicures, haircuts and happy hours. Their own selfishness dominates their behavior and clouds their ability to consider the wellbeing of others. They see the entire world from the vantage point of their pleasure-driven egos and they outright refuse to be inconvenienced for the benefit of others.

The narcissistic hedonists talk about how they have a right not to wear a mask and how those who worry over the pandemic should just stay home. "You're infringing on my rights," they scream any time they are told they can't enter a store without a mask. "This is a free country, and I'm here to shop."

The narcissistic hedonists have no commitment to a social project nor do they care a wit about the common good. They have weighed the costs and risks of their behavior and they think that their own desires are more valuable than their grandparents' lives.

This strain of covidiot also has a long history in this nation. Unlike the eye roller who thinks everything in the nation is already great or the shoulder shrugger who cares more about the economy than society, the narcissistic hedonist places their desires at the center of everything. And, even worse, they think that their own destructive ego-driven behavior is their "right" as Americans.

Fauci, the director of the National Institute of Allergy and Infectious Diseases, recently warned of the dangerous consequences of our national anti-science bias: "One of the problems we face in the United States is that unfortunately, there is a combination of an anti-science bias that people are — for reasons that sometimes are, you know, inconceivable and not understandable — they just don't believe science and they don't believe authority."

Yet, as Pierce documents in the book I cited earlier, the American tendency to eschew expertise and disparage science has extremely deep roots in our collective history. It is tied not just to religious extremism, but also to the history of anti-intellectualism in the U.S. The urge to put down teachers and professors alongside scientists is part of the American habit of distrusting smart people and it is tied to the idea that some folks would prefer a president they want to have a beer with over an intellectual or even highly educated president.

The anti-expertise sickness that plagues the United States is sadly to blame for much of the failed U.S. response to the pandemic, but its negative impact on the functioning of our nation goes well beyond flaws in our healthcare system and public health policy. As long as we continue to be skeptical of knowledge and attracted to BS, we can expect our nation to continue to look less and less like a developed nation.

One of the special features of conspiracy theorists is that they are found on both the left and the right, unlike a lot of the other strains of covidiots. They converge in the bizarre alternate reality of anti-vaxxers. But, regarding the coronavirus, the conspiracy theories are largely skewed to the right.

The range of conspiracy theories about the pandemic is simply too broad to cover in this piece.  It spans from theories that the virus was deliberately started by China or by Bill Gates to theories that the virus simply isn't real at all. Nature reported in March that "the website Biohackinfo.com falsely claimed that Gates planned to use a coronavirus vaccine as a ploy to monitor people through an injected microchip or quantum-dot spy software."

Healthline reported in June that 25 percent of people believe unproven theories about COVID-19. This is all to show that there is a strange urge in this country to attach to fantasy theories rather than facts.

The danger to the conspiracy theorist is not just their refusal to accept evidence that challenges their views, but rather their paranoid worries that any evidence is actually propaganda designed to dupe them and cause harm. The conspiracy theorist is so worried thinking that information is manipulation that they lose any sight of what the truth actually is. And as coverage of a Palm Beach County Commission meeting that went viral for the outlandish arguments presented by residents against a mask ordinance (which the Florida county did pass) shows, covidiots tend to mix up their reasons for refusing to wear masks and take the pandemic seriously. Trying to follow these arguments against wearing masks will hurt your brain.

What's worse is that having to "debate" matters of science and evidence-based medicine tends to leave us fighting each other rather than the virus. Even more disturbing, there is no vaccine for covidiocy: It promises to linger well after the virus has been contained, wreaking havoc on our society, taking up resources and frustrating progress. It's a condition that has plagued our country for decades and it won't be cured until and unless we make a collective effort to prevent its spread.