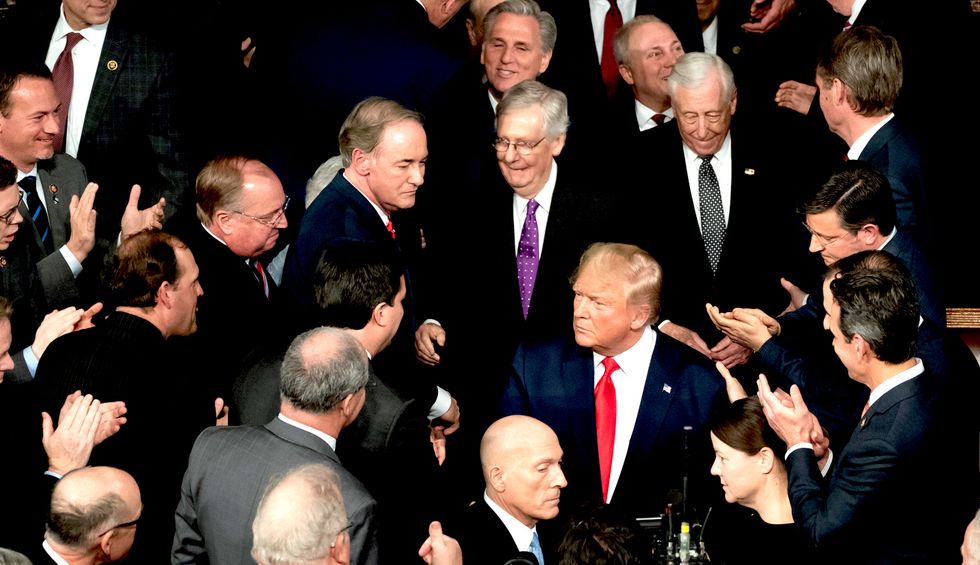 President Donald J. Trump arrives in the House chamber and is greeted by members of Congress prior to delivering his State of the Union address Tuesday, Feb. 4, at the U.S. Capitol in Washington, D.C. (Official White House Photo by Andrea Hanks)
Hunter
and
Daily Kos
July 27, 2020 The Right Wing

There's been little good news of late, so here's something to enjoy: the travails of House Minority Leader Kevin McCarthy, who's been scrambling to gather money for the National Republican Congressional Committee to help save House Republicans from what's looking to be another thrashing in the November elections.

The Post's report is full of juicy tidbits worth savoring. McCarthy "specifically has asked" Trump failson-in-law Jared Kushner to direct money to the House, but Kushner isn't having it. And even the Trump campaign is privately aware of what's up: It's not that the Trump campaign isn't absolutely awash in money. It's just that they don't want to give it to anyone else. That's grifting money, won fair-and-square.

“The campaign just wants the money.... They don’t care about the House—it’s not their concern,” the Post quotes an anonymous "official close with the Trump campaign." Well, yes.

Another tidbit: "Those familiar" blame Kushner, for "failing to understand the importance of unity and working together."

Wow. Yeah, go figure. If only there was something that might have indicated the extended Trump family were greed-obsessed sleazebags not interested in doing anything for anybody.

It turns out that one of the downsides of immunizing a corrupt president's transparently corrupt behavior then falling in line behind him as his bungling narcissism-clouded incompetence kills 140,000 Americans while wrecking the nation's economy is that by golly, it might turn out that the public decides that they hate your cowardly and crooked guts. The 140,000 dead Americans House Republicans can brush off, but when their usual donors aren't coughing up cash because the economy has crashed and small donations from people who would rather not die for Dear Leader's latest whims are piling up, that's something even Kevin McCarthy will start noticing.

I think I speak for all of us when I say we absolutely and earnestly do not wish him well with any of it. McCarthy and his compatriots betrayed the country twice in short succession. It serves them right if, after everything else, their Dear Leader con-artist figurehead stiffs them.

After all, Trump and Kushner are trying to siphon off as much of that cash as possible into Trump's own personal businesses. What does he care what happens to his House allies?