For the American right, masks are tyranny but Trump's secret police aren't 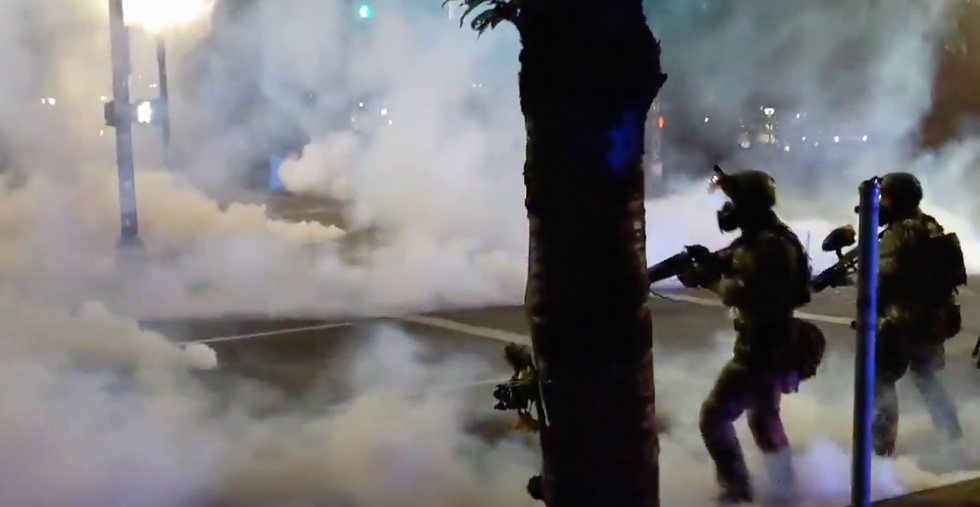 Not long ago, heavily armed white men (and a handful of white women) stood on the steps of Michigan’s Capitol. They were protesting the governor’s lock down amid the spread of the new coronavirus. Gretchen Whitmer, they said, was infringing on their constitutional rights and liberties. They were showing they would not stand for it.

It was a nice bit of political theater that has since grown nationally into a battle over wearing masks. Refuse to wear one, and you support the president. Wear one, and you don’t. But beneath the protests was something members of the press corps believed they should take seriously: a conservative ideology ever watchful of corrupt power.

It should be clear to the press corps, and to a citizenry informed by the press corps, that those protests had nothing to do with the tyranny of government. It should be clear that when they said, “Don’t tread on me,” that didn’t include you. It should be clear, to everyone, that such protests weren’t principled. I’m not going to argue what they were really about. Maybe small men with small minds need to act up. What I do know: if there’s anything worthy of armed resistance, it’s the emergence of Donald Trump’s secret police force. Yet here we are. As far as I can tell, nothing but crickets.

The secret police are real. Groups of heavily armed and unidentified federal agents in military dress have been gassing peaceful protesters in Portland, Oregon, under the guise of protecting “federal facilities,” meaning monuments. We now know they are with Border Patrol and Immigration and Customs Enforcement, among other agencies under the US Department of Homeland Security. These are the same agencies that gassed peaceful protesters out of Washington’s Lafayette Square so the president could do a photo shoot with a Bible in front of a church. Videos online have shown officers in Portland taking protesters into custody without reading their rights, loading them into unmarked vans, and threatening to shoot anyone attempting to follow them.

Its activity goes beyond disappearing citizens amid social upheaval. The Oregonian, the state’s paper of record, reported Monday that “protecting” monuments from protesters seeking justice for the murder of George Floyd, in addition to greater racial equality over all, now includes spying on them as well as infiltrating their ranks. It reported: “The court records provide a window into the tactics of federal agencies based at the courthouse in downtown Portland at a time when local, state and congressional officials from Oregon have roundly criticized the national law enforcement presence.”

Its authority is broadly drawn. According to a classified document obtained by Lawfare’s Steve Vladeck and Benjamin Wittes, DHS is not only “protecting” federal monuments but those not under its purview, and it has authorized domestic spying as a means of pursuing that end. “The memo makes clear that the authorized intelligence activity covers significantly more than just planned attacks on federal personnel or facilities. It appears to also include planned vandalism of Confederate (and other historical) monuments and statues, whether federally owned or not” (my italics). Such an expansive view of federal police power is ripe for corruption, leading some of us (me!) to worry that a president in desperate need of winning a second term might use a secret police force to harass and intimidate Americans of color as they wait in line to vote, or even detain them under suspicion of attempting to commit voter fraud.

The question should’t be whether to protect federal monuments (that’s for another time), but instead who’s doing the protecting? A conservative of a mind to protest a governor’s lock down should also be of a mind to tell the federal government to butt out of state and local affairs, whether the monuments are federally owned or not. The sovereignty of the states of the United States is the load-bearing wall of American conservatism. It is to be protected even if outcomes are harmful, as was the case when GOP attorneys general sued to overturn the Affordable Care Act. We don’t need the federal government to care for us, the thinking went. We can take care of ourselves.

At the time, that seemed principled, but the same people, as far as I can tell, now have little or nothing to say about expansive and potentially corrupt police power that blurs the line between state and national governments, undermining a principle that they used to say was central to the American idea of freedom. When people walk all over values they once said were nonnegotiable, it’s time to stop taking them seriously.