Dr. Deborah Birx seemed like a reasonable voice close to the throne. Now she's destroyed herself — and for what? 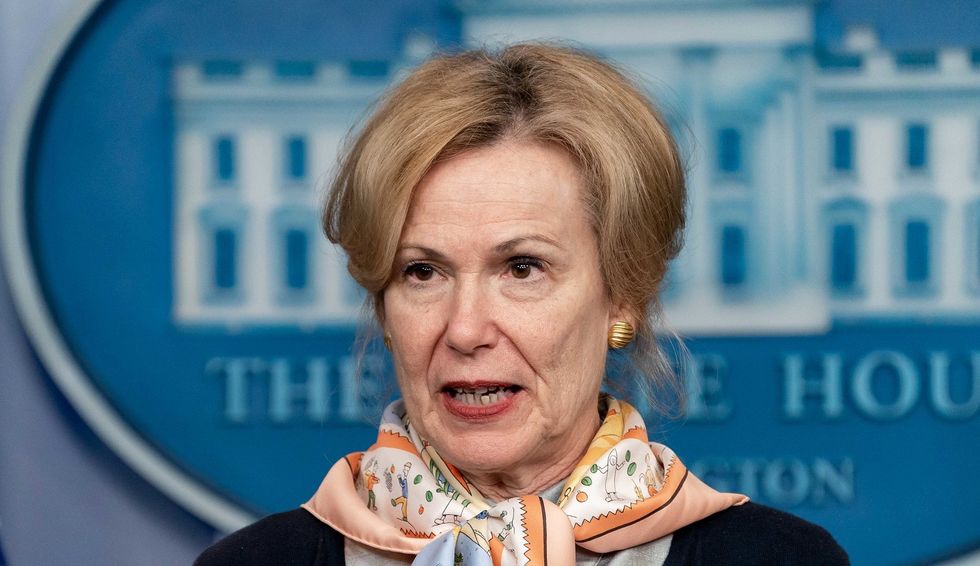 White House Coronavirus Task Force Response Coordinator Deborah Birx delivers remarks during a coronavirus update briefing Thursday, April 23, 2020, in the James S. Brady Press Briefing Room of the White House. (Official White House Photo by Andrea Hanks)
Heather Digby Parton
and
Salon
July 20, 2020 News & Politics
Over the past week or so, there's been a major attempt by the Trump administration to demean the reputation of Dr. Anthony Fauci, the director of the National Institute of Allergy and Infectious Diseases, with anonymous "oppo-research" and open insults from Peter Navarro, a trade adviser close to President Trump. Fauci is widely acknowledged to be one of the world's foremost experts on pandemics so there was a furious pushback to this crude character assassination. Despite the fact that Trump had made similar remarks about Fauci being "wrong" about the coronavirus, the president was forced to throw Navarro under the bus despite the fact that it's obvious they've been on the same page.

Trump is obviously jealous of the public's trust in Fauci, compared to the increasing public skepticism of anything he personally says about the crisis. But this attack on Fauci is really just a symbol of the administration's rejection of the reality we can see with our own eyes: a new explosion of COVID-19 all over the country.

It was an ugly kerfuffle but certainly not something that should have surprised us. Trump has been insulting and purging any government employee he deems disloyal, and since Fauci isn't blowing smoke about the virus, that's how Trump sees him.

Over the weekend Trump gave an interview to Fox News' Chris Wallace and made a fool of himself trying to deny this reality. He insisted, as he always does, that the virus is not spreading and the rising number of cases is entirely due to expanded testing, which is complete nonsense.

According to the New York Times fact check:

The United States has the eighth-worst fatality rate among reported coronavirus cases in the world, and the death rate per 100,000 people — 42.83 — ranks it third-worst, according to data on the countries most affected by the coronavirus compiled by Johns Hopkins University.

That was far from the only false information Trump shared on the pandemic. And it raises the question: where does he get this stuff? As you can see by that clip above, he had White House press secretary Kayleigh McEnany standing by with papers that had headings on them saying things like "The United States has the lowest mortality rate in the world" but that doesn't mean anything. While it's possible that Trump just heard this from one of the voices in his head, we don't need to go there right now.

Well, the Times did another one of those deep dives into how the White House handled the pandemic, which offers up some new information about that question. This time the reporting team looked specifically at the month of April, when the administration made a dramatic shift in strategy to shovel all responsibility for the pandemic response onto the states. That article suggests that if you want to point the finger at one member of the White House coronavirus task force who has consistently fed optimistic projections and questionable data points to the president, it's Dr. Deborah Birx.

It turns out that many of the most important decisions that were made during that period weren't done by the official task force headed by Vice President Mike Pence, but by another shadowy group that met every weekday morning in White House chief of staff Mark Meadows' office. (Remember, Jared Kushner was also running his own task force on a secret, separate track.)

This one was single-mindedly dedicated to producing evidence to back up the White House decision to open up the economy, come what may. Dr. Birx was their validator, the only public health official among the group of political hands, and the Times describes her as "the chief evangelist in the West Wing for the idea that infections had peaked and the virus was fading quickly."

During the morning meetings in Mr. Meadows's office, Dr. Birx almost always delivered what the new team was hoping for: "All metros are stabilizing," she would tell them, describing the virus as having hit its "peak" around mid-April. The New York area accounted for half of the total cases in the country, she said. The slope was heading in the right direction. "We're behind the worst of it."

During much of mid-April, Dr. Birx focused intensely on the experience that Italy had fighting the virus. In her view, it was a particularly positive comparison, telling colleagues that the United States was on the same trajectory as Italy, where there were huge spikes before infections and deaths flattened to close to zero.

Dr. Birx would roam the halls of the White House, sometimes passing out diagrams to bolster her case. "We've hit our peak," she would say, and that message would find its way back to Mr. Trump.

Unlike Fauci, she had an office in the West Wing and fully embraced "her role as a member of the president's team." I think we know what that means.

Birx relied on an optimistic model that depended on everyone doing everything exactly right, while Fauci had a more realistic view of probable human behavior and listened to reports on the ground as well as the statistical data. As things got worse, Birx's rosy scenarios were chosen over Fauci's darker predictions. Trump didn't want to hear bad news and Birx was there to give him what he needed.

She still is. Apparently, she remains the go-to for the White House communications team whenever they need some damage control. McEnany was asked the other day how she could claim that everything was well in hand when hospitalizations were going up rapidly. She replied, "I spoke with Dr. Birx this morning — about 10 to 40 percent in the hospitals reaching high capacity are COVID, so a lot of hospitalizations aren't pertaining to COVID." (The word on Sunday was that some hospitals in Florida's Miami-Dade County had run out of available ICU beds. That was not the result of elective surgeries. )

Fauci describes Birx, whom he considers a friend for decades, as more political than him, a "different species." Indeed she is. In fact she often sounds like Kellyanne Conway or McEnany:

When Birx first came on the scene at the beginning of the pandemic, I wrote about the fact that she was part of a Christian right public health subculture (yes, that actually exists) that surrounds Mike Pence's office. I don't think I expected that she'd be willing to sacrifice her reputation as a serious infectious disease expert for the thrill of being on Trump's "team." Apparently she has.

Whether Birx's upbeat scenarios were passed on to the president and his enablers because she truly believed them or because she wanted to be a team player is an interesting question. It doesn't much matter in reality, because the result has been a disaster. Like so many others who came into Trump's orbit, she threw her respectable career on the fire to please a president who so far over his head that he's pretty much buried himself and taken her down with him. Tragically, they've both overseen policies that have buried more than 140,000 Americans in the last five months as well.