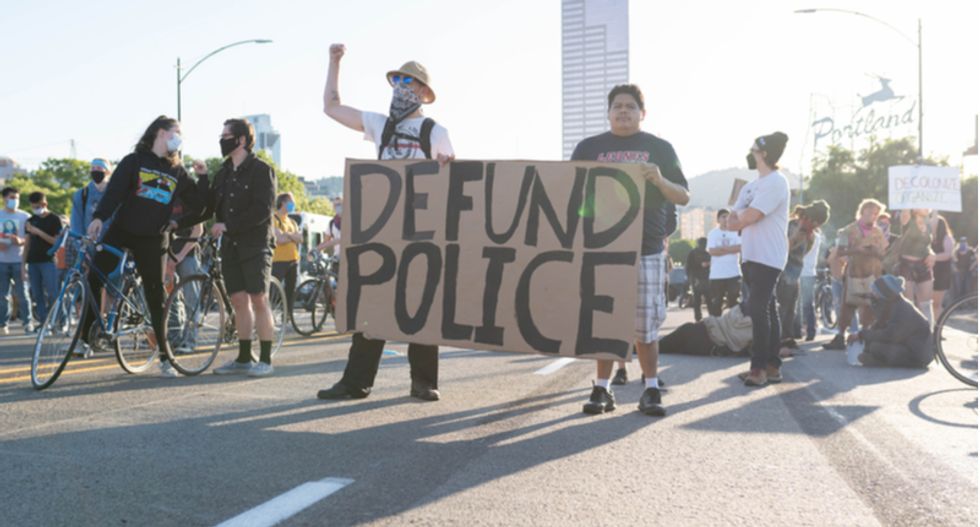 Portland, Oregon has had numerous protests and demonstrations since the death of George Floyd in Minneapolis on May 25, the vast majority of which have been nonviolent. But some protesters have experienced detentions by federal law enforcement even though they were never charged with anything, and the detentions — according to Washington Post reporter Katie Shepherd — are raising civil liberties concerns.

One such detention in Portland, Shepherd reports, involved 29-year-old activist Mark Pettibone — who decided to run after some men wearing military fatigues emerged from an unmarked gray minivan. Pettibone told the Post that when he first saw the men, he feared they were far-right extremists who wanted to harass protesters. Unable to get away from them, Pettibone surrendered and was detained, searched, taken to a federal courthouse and kept in a holding cell.

The activist also told the Post: “I have a pretty strong philosophical conviction that I will not engage in any violent activity. I keep it mellow and try to document police brutality and try to show up for solidarity.”

Although Pettibone was released by the federal officers and was never charged with anything, civil libertarians are criticizing the random detentions taking place in Portland.

“Arrests require probable cause that a federal crime had been committed — that is, specific information indicating that the person likely committed a federal offense, or a fair probability that the person committed a federal offense," Orin Kerr, a law professor at the University of California at Berkeley, told the Post. If the agents are grabbing people because they may have been involved in protests, that’s not probable cause.”

Democratic Sen. Ron Wyden of Oregon has been even more vehement in his comments. On Thursday, the senator tweeted:

Over the weekend, 26-year-old Donavan La Bella, described by Oregon Live reporter Ryan Nguyen as “a regular and nonviolent presence at protests,” was shot in the head with an impact weapon.

Wolf, on Friday, tweeted an appearance on Sean Hannity’s Fox News show in which he discussed the protests in Portland and said, “We’re not going to have these violent anarchists who show up about the same time every night for a series of hours…. It’s time that the local leaders here publicly condemn what the violent anarchists are doing.”

But the vast majority of Portland protesters have not been "violent anarchists." And although President Trump has been praising the actions of federal law enforcement in Portland, Jann Carson — interim executive director of the Oregon ACLU — told the Post, “Usually, when we see people in unmarked cars forcibly grab someone off the street, we call it kidnapping. Protesters in Portland have been shot in the head, swept away in unmarked cars, and repeatedly teargassed by uninvited and unwelcome federal agents. We won’t rest until they are gone.”

Portland City Commissioner Jo Ann Hardesty, similarly, argued that the presence of federal officers in Portland is doing more harm than good. Hardesty, in an official statement, declared: “I am proud to be among the loud chorus of elected officials calling for the federal troops in Portland’s streets to go home. Their presence here has escalated tensions and put countless Portlanders exercising their First Amendment rights in greater danger.”