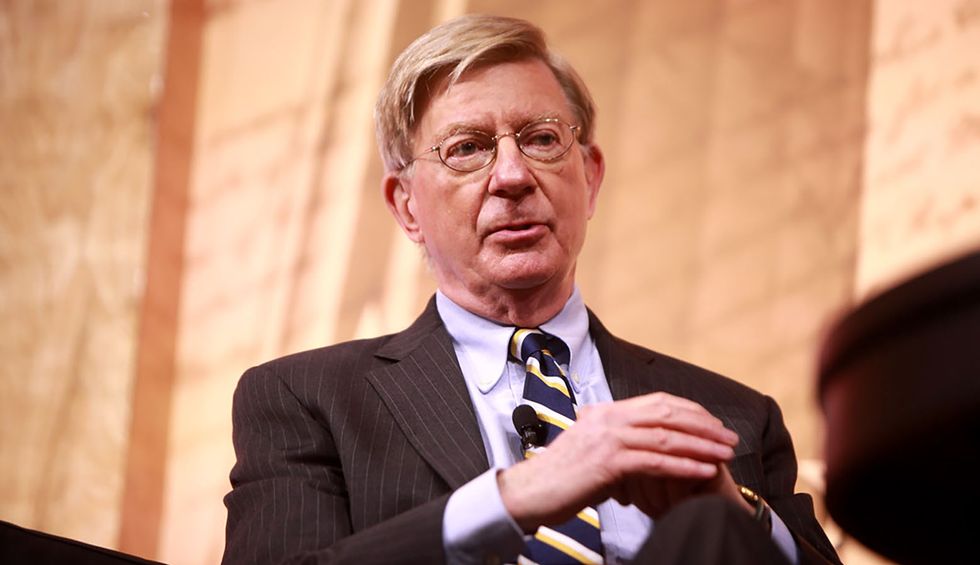 Like the late William F. Buckley, George Will was among the most prominent conservative pundits of the 1970s and 1980s. But these days, the former Republican often finds himself commiserating with liberals at MSNBC and expressing his vehement opposition to Donald Trump’s presidency. Will offers a grim assessment of life in the Trump era in his latest Washington Post column, arguing that the United States is now “in a downward spiral.”

The conservative columnist gives a variety of reasons why he believes the U.S. is in severe decline, from Trump’s response to the coronavirus pandemic to his support of cronies who have been convicted of serious crimes — including Paul Manafort (Trump’s 2016 campaign manager) and veteran GOP operative Roger Stone, who was getting ready to begin a 40-month federal prison sentence before Trump gave him a commutation. Stone was convicted of crimes ranging from obstruction of justice to witness tampering.

“The nation’s floundering government is now administered by a gangster regime,” Will laments. “It is helpful to have this made obvious as voters contemplate renewing the regime’s lease on the executive branch. Roger Stone adopted the argot of b-grade mobster movies when he said he would not ‘roll on’” Donald Trump. By commuting Stone’s sentence, Stone’s beneficiary played his part in this down-market drama, showing gratitude for Stone’s version of omertà — the mafia code of silence.”

Will was a passionate supporter of Ronald Reagan’s presidency during the 1980s. But this year, he is making no secret of his desire to see former Vice President Joe Biden defeat Trump in November.

“Never has a U.S. election come at such a moment of national mortification,” Will writes. “In April 1970, President Richard M. Nixon told a national television audience that futility in Vietnam would make the United States appear to the world as ‘a pitiful, helpless giant.’ Half a century later, America, for the first time in its history, is pitied.

Will wraps up his column by arguing that the United States’ past achievements seem like a distant memory in light of its dysfunction during the Trump era.

“This nation built the Empire State Building, groundbreaking to official opening, in 410 days during the Depression — and the Pentagon in 16 months during wartime,” Will notes. “Today’s less serious nation is unable to competently combat a pandemic, or even reliably conduct elections. This is what national decline looks like.”