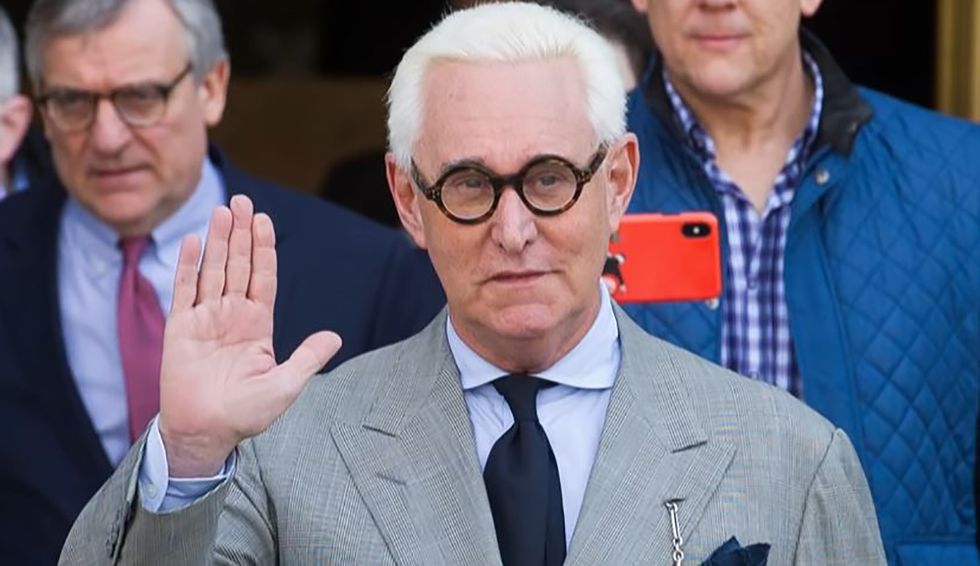 It’s hard to know where to begin discussing the president’s commutation of Roger Stone’s sentence. So let’s start with what it means. It’s not a pardon. Donald Trump’s goombah is still a felon convicted of witness tampering and lying to the US Congress. He plans to appeal the guilty verdict. “Commutation” merely means he won’t go to jail.

The move was widely expected in Washington. Only the timing was in doubt. The president had hoped to wait until after the election, according to Bloomberg News, but Stone appears to have forced his hand. He feared prison would expose him to the new coronavirus, which can be fatal to people his age (67). Stone told a journalist Thursday that he believed the president would commute his sentence, because he stayed quiet while under pressure to cooperate. That statement, given the day before his 40-month sentence was to begin, was widely interpreted to mean: do it now or I start singing.

What tune? Well, probably that Stone was the intermediary between Trump—not his campaign staff, but Trump himself—and Wikileaks. Wikileaks, you’ll recall, is the anti-secrets organization that received tens of thousands of documents stolen from the Democratic National Committee and associates of the Democratic nominee. They were released, most memorably, during the 2016 Democratic National Convention to sow chaos and, later that year, to distract from the grab-’em-by-the-pussy video. This tranche of emails was stolen by Russian intelligence officials working at the personal direction of Vladimir Putin, who was waging a one-sided war against Hillary Clinton.

The link between Trump and the Kremlin has been suggested since before Robert Mueller started investigating Russia’s violation of our national sovereignty. It was clearest after Buzzfeed sued for the release of unredacted portions of his report that involved Stone. “The new revelations are the strongest indication to date that Trump and his closest advisers were aware of outside efforts to hurt Clinton’s electoral chances,” Jason Leopold et al. reported June 19, “and that Stone played a direct role in communicating that situation to the Trump campaign. Trump has publicly denied being aware of any information being relayed between WikiLeaks and his advisers.”

An even stronger hint came from Robert Mueller himself. In reaction to Trump’s spectacularly corrupt decision to commute Stone’s sentence, the former special counsel wrote an op-ed Saturday for the Post in which he explained why Stone was a “central figure” of his investigation: “He communicated in 2016 with individuals known to us to be Russian intelligence officers, and he claimed advance knowledge of WikiLeaks’ release of emails stolen by those [same] Russian intelligence officers.”

In my view, Saturday’s op-ed was the closest Mueller has gotten to saying out loud for everyone to hear that the president was involved in an international criminal conspiracy to defraud the American people—collusion with the enemy, if you will—only he couldn’t quite prove it thanks partly to Stone’s silence. The closest Mueller got to Trump was citing him, unnamed, as an “unindicted co-conspirator” in the successful prosecution of his attorney, Michael Cohen. Trump no doubt wants to stay unnamed. Rewarding Stone for his silence was probably the surest way of doing that.

We do not know with certainty whether Stone was the link between Trump and the Kremlin, but all evidence so far points strongly in that direction. (Not to mention the president’s extreme deference to Moscow, including his looking the other way while it pays Taliban militiamen to kill American troops.) Moreover, we do know that Roger Stone knows something the president does not want the American people to know. Otherwise, he would not have risked political fallout from commuting his sentence months before the election. That decision, furthermore, was careful and premeditated and timed. It doesn’t take a rocket scientist to figure that going easy on Stone might be part of a conspiracy to defraud the American people that never actually ended. In this context, what “commutation” means is the covering up of the cover up of a crime.

It’s hard to say what the impact will be politically. It might be just one more insult to add to the pile of reasons to vote Trump out of office. It might be grounds for a second impeachment (though I doubt it). It might be license for the appointment of a new special counsel after the election. What’s more certain, I think, is that Trump just took all the gas out of efforts to foment (at least the appearance of) a white backlash against Black Lives Matter and protests demanding justice for the murder of George Floyd. Trump himself often calls for “law and order” as if he were candidate Richard Nixon in the late 1960s. Most of his GOP confederates are following suit, accusing activists who are tearing down statues to confederate traitors of being “violent” and “lawless.” All of that is hard to square with a president who flouts conspicuously not only the consequences of the law (Stone’s jury-trial conviction) but the rule of law itself.

In a way, Trump has always been telling us the truth. He has often said his greatest fear is being seen as an illegitimate president. Well, there’s a good reason for that.