Bill Barr squirms and dodges as Rep. Neguse calls out his repeated lies 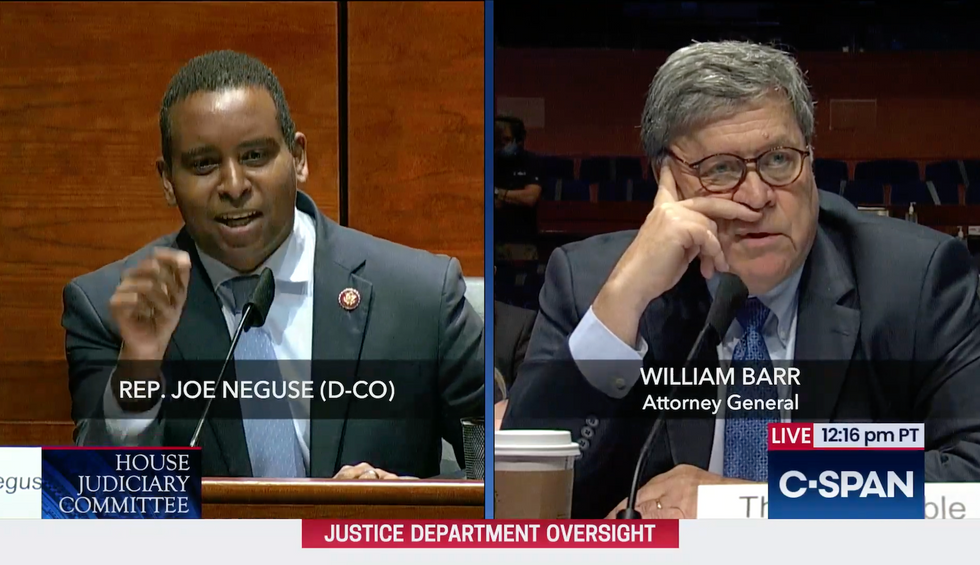 Rep. Joe Neguse (D-CO) took advantage of his opportunity on Tuesday to question Attorney General Bill Barr and exposed his relentless lying during the House Judiciary Committee hearing. In response, the attorney general appeared at times visibly uncomfortable and tried to shamelessly warp the truth.

"On April 18, 2019, you state that "the White House fully cooperated with the special counsel’s investigation,' you're aware of that?" Neguse asked.

"Today, yes or no, Mr. Barr, under the penalty of perjury, do you testify that that statement was true at the time you made it?"

"I thought it to be true at the time I made it," Barr said, putting his hand on his face. "Why isn't it true?"

"Does it have to do with quibbling over—"

"Reclaiming my time!" said Neguse. "You answered the question. I have another question for you."

But Barr pushed back, clearly getting irritated at the threat of perjuy, saying: "I'm going to answer the damn question. I think what I was referring to, and I'd have to see the context of it, was the supplying of documents."

"No, Mr. Attorney General, the statement was not limited to the supply of documents," replied Neguse.

"I think that's what I was talking about," said Barr.

Neguse started to become irritated himself, speaking rapidly and forcefully.

"You stated at a press conference on April [18] of 2019 that the White House fully cooperated with the special counsel's investigation," he said. "You knew, when you made that statement, that the president had not agreed to be interviewed by the special counsel. Now on June 18 of this year—"

"I think I subsequently said I was referring to the production of documents," Barr interjected, his face appearing to twitch uncomfortably in frustration.

Neguse barreled forward with his questioning, but it's worth noting that Barr's attempt to justify his obvious lie is untenable. Here's the full quote from Barr's press conference:

Nonetheless, the White House fully cooperated with the Special Counsel’s investigation, providing unfettered access to campaign and White House documents, directing senior aides to testify freely, and asserting no privilege claims. And at the same time, the President took no act that in fact deprived the Special Counsel of the documents and witnesses necessary to complete his investigation.

Since Trump himself did not agree to sit down with an interview, which the special counsel sought, these claims are clearly false. And Barr knew it.

Neguse moved on to another lie: Barr's claim that former U.S. Attorney Geoffrey Berman had "stepped down" from his position. After Barr made this announcement on June 19, Berman quickly contradicted it and said he had no intention of leaving voluntarily.

"Do you testify today that that statement was true at the time the department issued it?" Neguse asked.

"He may not have known it, but he was stepping down,' Barr said, laughing, caught in his lie. "He was being removed!"

"He was being removed, and I wanted the opportunity to offer him another job and talk to him the next day," said Barr.

"I understand your rationalization," said Neguse.

Barr wasn't pleased with that, declaring: "It's not a rationalization." But clearly, it was. Barr has already offered Berman another job, and Berman had turned him down. Barr thought that by lying about Berman already stepping down, he could will the circumstances he desired into existence. But it was a lie — one that blew up in his face. And now we all know it.