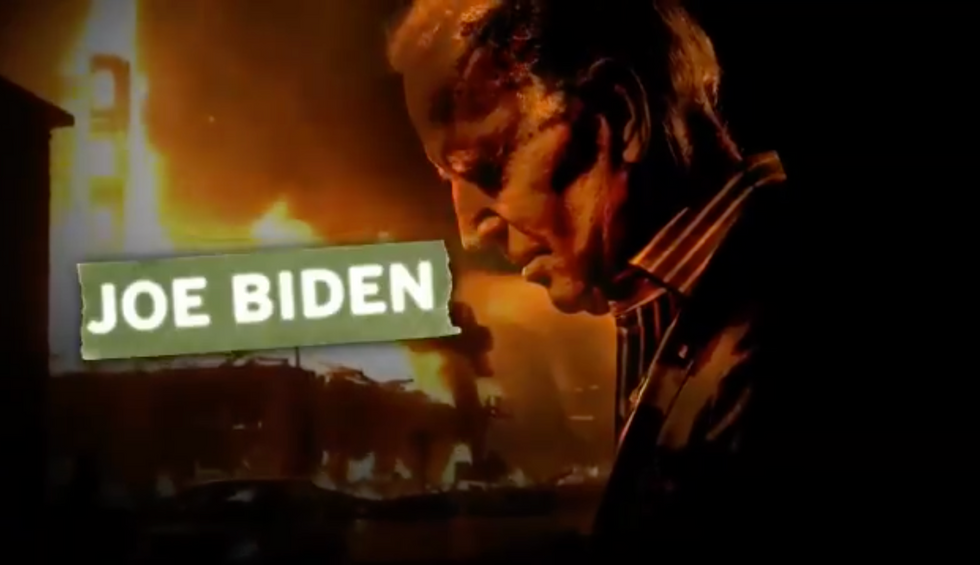 There's a new ad out from the Trump campaign, and it shows quite clearly why the president's team is having such a hard time selling the prospect of his re-election.

The video begins by listing a series of supposed agenda items from the "radical left-wing mob" — taking over cities, defunding police — claiming that Biden supports these goals.

Clearly, the Trump campaign had a plan to run against Sen. Bernie Sanders as a dangerous socialist, and it's trying to use that same playbook against Biden. But however effective that script may or may not have been against Sanders, it's clearly an uphill battle to use it against Biden. Biden famously and decisively won the primary against Sanders by running in opposition to the left-wing of the Democratic Party, so it will be hard to convince voters that he's a secret radical.

At one point, the ad claims Biden supports "cutting police funding," by quoting a short snippet of an interview in which Biden said "Yes, absolutely." In reality, Biden's response came to the question: "But do we agree that we can redirect some of the [police's] funding?" That's hardly a radical idea. And the fact that the Trump ad clearly cut off the question Biden was answering showed it was afraid of letting viewers hear the true context. In other statements, Biden has distanced himself from the "Defund the Police" slogan.

So the initial attack on Biden was pretty weak. But what followed in the ad really made clear that the Trump campaign is in dire straits.

"Violent crime exploding. Innocent children fatally shot," the narrator said, with recent news stories cited on the bottom of the screen. All throughout the ad, images of recent protests and unrest played in the background. "Who will be there to answer the call when your children aren't safe?"

What makes this so disastrous for the president is it acknowledges problems going on right now — problems that Trump is doing nothing solve. If it wants viewers to believe there's chaos that only Trump can fix, it raises the question: Why hasn't the incumbent president fixed it? Why should we believe a Biden presidency is so scary when the supposedly bad things are happening now?

To win over voters, the Trump campaign is trying to argue that Biden would be some dangerous departure from the status quo. But Biden was a sitting vice president during a recent administration that ended on much better terms than the country is currently experiencing. So it's hard to see many viewers who aren't already Trump fans becoming convinced by such an ad.

Yet it seems that Team Trump has no better strategy for winning the election. They want us to believe that a member of the political establishment is a revolutionary and that the problems arising under Trump are somehow someone else's fault. And the fundamental truth is that this narrative that they'd like voters to believe just doesn't match with the facts of American life in 2020.