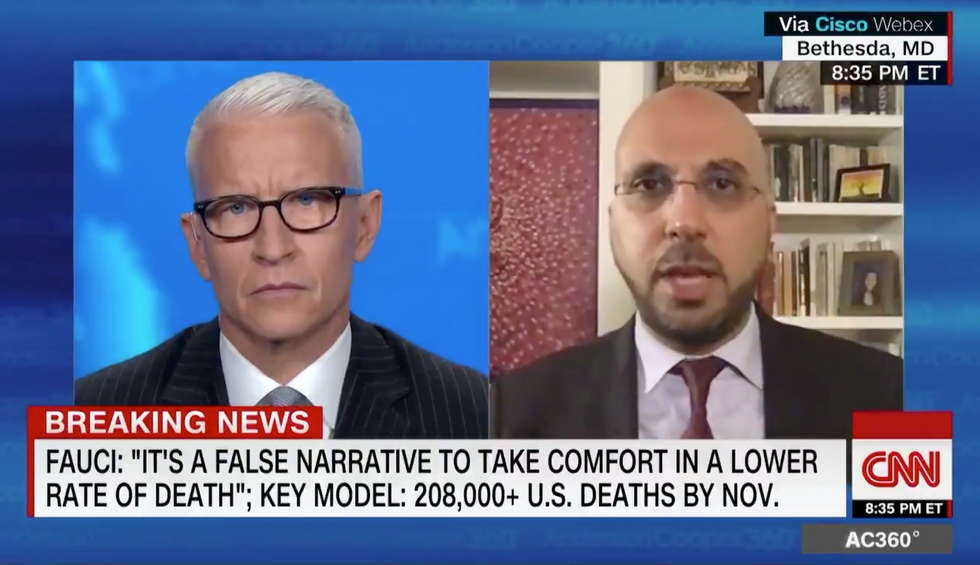 Dr. Kayvon Modjarrad, the director for Emerging Infectious Diseases at the Walter Reed Army Institute of Research, joined CNN's Anderson Cooper for a recent TV interview to discuss the ongoing work to create a vaccine for the coronavirus. And in many ways, his remarks brought good news about the development process and progress toward a safe and effective vaccine. But he also hinted at a dark potential future for the virus, a consideration that has not yet received much public discussion.

"I am very optimistic that we will have a vaccine in the near future, a safe vaccine," he said. "How effective that vaccine will be — time will tell. And I don't think there's going to be just one vaccine. There'll be multiple vaccines that we try to get across the finish line, as quickly as possible. And we may need multiple interactions of the vaccine going forward, season to season."

In much of the public discussion about a vaccine, it has been seen as the endpoint of the pandemic. Once we get the vaccine, many assume, we can stop social distancing, closing schools, and limiting travel; we can return to the lives we knew. More sophisticated discussions of the matter acknowledge that even once a vaccine is approved, it may take time to produce enough doses for everyone who needs it and to make sure its use in the population is widespread. Many also point out, as Modjarrad did, that vaccines may be only partially effective and reach only a portion of the population, meaning that we would reduce the severity of the pandemic without ending it completely.

But Modjarrad's comments point to another further complication. SARS-CoV-2, the virus that causes COVID-19, may be with us for long into the future, and we may consistently need new versions of the vaccine every year as the virus mutates.

This is the situation we find ourselves in with the flu every year. It's just a part of life, of course, that every year there's a new flu season, and scientists develop a new version of the flu vaccine to target versions of the virus that they believe are likely to be prevalent that year.

But though we've gotten used to it, every year the flu is a tragedy. Tens of thousands of people die in the United States alone. COVID-19 skeptics early on compared the disease to the seasonal flu as a way to downplay the threat, but in reality, we probably should take much more care every year to reduce flu deaths. We may be able to save thousands of lives, which in most contexts everyone would agree is worth doing.

What Madjarrad's comments suggest is that we may find ourselves with a coronavirus season every year, just like we have flu seasons. It's a tragedy that we don't do more to stop the flu — and some researchers have hopes to create a universal flu vaccine, which could potentially end flu seasons the way we ended polio — but it would be even more disastrous if we found ourselves with multiple deadly and debilitating waves of respiratory illness spreading through the population annually. We may get used to it, at some point, just as we've gotten used to the flu. But that doesn't make the deaths and harm to human health any more devastating. It's also worth remembering that we don't know what the long-run effects of a SARS-CoV-2 infection are likely to be, introducing further dangers.

Modjarrad also noted that there's another possibility. Even if we're able to defeat SARS-CoV-2, as we defeated SARS-CoV (commonly just called SARS), there may be other types of coronavirus that emerge with disturbing frequency.

"This is the seventh coronavirus that has been identified as infecting humans," he explained. "Five of those seven have been identified since 2003, with SARS-1. Things are accelerating not decelerating. There's no reason to think another one isn't coming."

Now, we don't need to become unduly anxious about possible futures that may never arise. But one of the pre-COVID-19 failures, among the public, the government, and the media alike, was a failure to take seriously the possibility of disastrous events. We should have been better prepared for what we're facing now, and if we had been, a lot of people would still be alive. So we need to take seriously all the ways our current situation could worsen or persist in a dire state much longer than anticipated. If we don't, we're likely to get caught off guard by catastrophe once again.