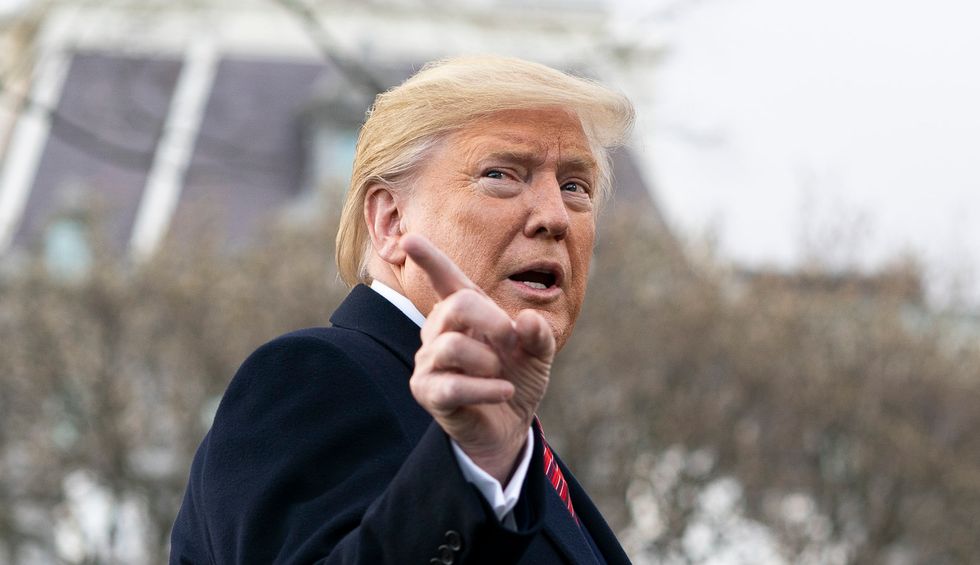 President Donald J. Trump speaks with members of the press along the South Lawn driveway of the White House Friday, Feb. 28, 2020, prior to boarding Marine One to begin his trip to South Carolina. (Official White House Photo by Joyce N. Boghosian)
Alex Henderson
July 13, 2020Election '20

It’s possible that after November 3, pundits will be talking about how President Donald Trump won reelection and bounced back from all the polls that, in June and July, showed him losing to former Vice President Joe Biden. But at the moment, the president really is in dire straits. Attorney Richard North Patterson, former chairman of Common Cause and a member of the Council on Foreign Relations, doubts that Trump’s reelection campaign will recover — and in a new article for The Bulwark, he explains why he believes that Trump is "cornered" and why his negative poll numbers have “hardened.”

“The electoral dynamics have already hardened,” Patterson writes. “Donald Trump will lose if everyone who wants to vote can. His remaining hope is to choose his own electorate.”

Patterson adds that between coronavirus, race relations and the state of the economy, Trump’s campaign is doomed — and he doesn’t believe that a rally-the-base approach can bring him a victory.

“Amid a deadly and economically ruinous pandemic,” Patterson writes, “[Trump] is driving a strategy aimed only at arousing his base — chiefly by inflaming white racial grievances and cultural resentment. He seeks not to heal the wounds exacerbated by George Floyd’s murder, but to exploit them.”

Trump, according to Patterson, is running a campaign that recalls Richard Nixon in 1968 — which is problematic for him because demographics in the U.S. have changed a lot since then.

“[Trump] converts predominantly peaceful protests into an epidemic of disorder, as if this were America in 1968,” Patterson explains. “But it is not 1968 — or even 2016. Our demographics have changed: the U.S. population was above 83% non-Hispanic white in 1968, compared to 60% today.”

Patterson complains that Trump’s campaign is “politically tone-deaf” and that he is failing to seriously address the issues voters care about the most — including the coronavirus pandemic.

“Trump’s presidency has been swamped by COVID-19 — yet another reason why his race-baiting, a loser in itself, is terminally deficient,” Patterson notes. “The pandemic has become a metaphor for Trump’s suffocating incompetence, mendacity and self-absorption.”

To make matters worse, Patterson adds, Trump is encouraging the U.S. Supreme Court to abolish the Affordable Care Act during the pandemic.

“A glaring example of Trump’s political empathy gap is a crucial issue underscored by the pandemic: health care,” Patterson observes. “Millions of people have lost employer-based health insurance during the pandemic — a number which, the Kaiser Family Foundation estimated in May, could reach 27 million. Trump and his party have no plan to help them. In fact, he has insisted on asking the Supreme Court to invalidate Obamacare, which would strip perhaps 23 million more Americans of their health insurance.”

Patterson concludes his piece by emphasizing that because Trump cannot win on the issues, his only hope is voter suppression.

“He has only one way out: pursuing voter suppression through any stratagem that limits Biden’s vote — like relentlessly exploiting the pandemic,” Patterson asserts. “That’s why he’s crying voter fraud and decrying voting by mail. As he flails in quicksand and self-pity, we can expect him to resort to more desperate measures. Curbing democracy will become what November is about.”