'You've really insulted me': Stephen Colbert brilliantly rakes John Bolton over the coals for being 'naïve' 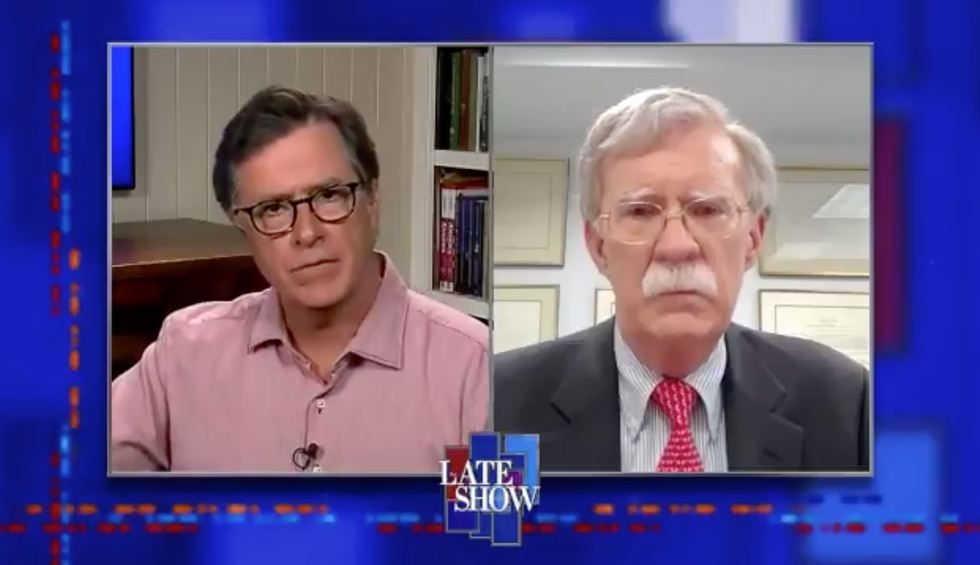 Although comedian Stephen Colbert — known for hosting “The Colbert Report” on Comedy Central from 2005-215 and “The Late Show” on CBS starting in 2015 — is a master of humor, he gets in his share of serious political barbs. And the 56-year-old Colbert did exactly that when former National Security Adviser John Bolton appeared on “The Late Show” this week to promote his new book, accusing the neocon war hawk of having been “naïve” in his assessment of President Donald Trump.

Colbert slammed Trump as someone who is “subject to the pressure of Vladimir Putin” and is “willing to sell out the interests of the American people for his own reelection,” asking Bolton: “What could be worse in Hillary Clinton or Joe Biden’s philosophy than betraying your country to a hostile foreign leader, sir?” A

And Bolton explained why he voted for Trump in 2016 and later joined his administration, even though he has become a fierce opponent of the president now.

Colbert explained: “I guess what’s exasperating is: there is absolutely nothing that Donald Trump has done that is surprising to me. My rule is: everything you think about Donald Trump is probably true because he’s not deep enough to get your socks wet in. He’s incredibly readable. That’s why, when he ran casinos, the house lost. There’s nothing to learn about him. That’s why he is essentially a boring person. How did you not know beforehand that he was just callow? “

“Because I couldn’t believe it was that bad,” Bolton said.

As Bolton tried to explain, Colbert cut him off.

“But you’re an international negotiator!" he said. "How could you be naïve? You’ve dealt with the worst people in the world.”