Will white solidarity with Black Lives Matter doom Trump in November? Don't count on it 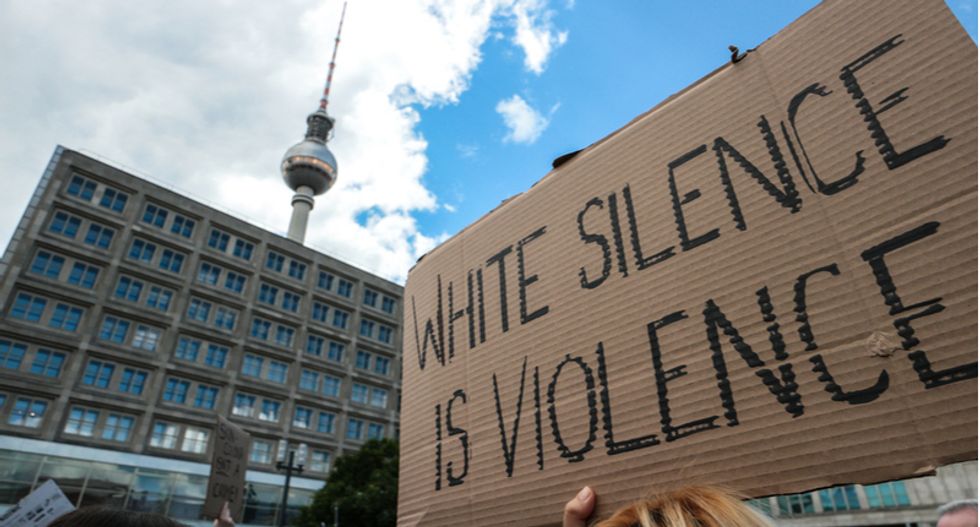 Berlin, Germany - June 6, 2020: Protesters hold up a "White silence is violence" sign at a Black Lives Matter protest on Alexanderplatz. Shutterstock/ Sybille Reuter
John Stoehr, The Editorial Board
and
The Editorial Board
June 11, 2020

This narrative is the result of new polls showing people drifting away who would not normally drift away, including senior citizens, who usually approve of Republican incumbents, as well as some working class white voters and some white evangelical Christians. This pattern is the result of nationwide protests demanding justice for George Floyd, demonstrations of a once-in-a-lifetime cross-racial solidarity that might signal, as I have argued, a transition from the old political regime and to a new one.

More importantly, this narrative is the result of white Americans starting to view the United States, its history, and its institutions through the lens of the African-American experience, which is to say, seeing, perhaps for the first time in their lives, that black people experience all the time fascism at the hands of corrupt police officers, and that black people, as a result of that experience, understand better than any other cohort that fascism or its variants will be with us long after Donald Trump is out of power.

It’s one thing to say white people are starting to see the world through black eyes, as I have, but quite another to assert a cultural shift among white Americans, and that recent polling is evidence of that shift. That is an enormous and dangerous assertion that could lay the groundwork for a repeat of 2016, when, as you will recall, everyone, including Trump, believed he couldn’t win—all the way up to the moment he did. We need to push back against this new media narrative. We need to push back even if polling is right in suggesting a Democratic victory. Better yet, let’s smother it.

Here’s what polling isn’t telling you because polling can’t: Donald Trump is the reason why white Americans are starting to see the fascism that has informed, shaped and built our law enforcement institutions. Black Lives Matter activists tried to tell white Americans. They tried telling us that systemic racism is real and that we must act in the name of democracy, liberty and justice. But many white Americans could not quite believe things were as bad as that, because a biracial cosmopolitan intellectual sat in the Oval Office. Barack Obama seemed the embodiment of a “post-racial America.”

Systemic racism allows white Americans to live their whole lives not knowing what cops do to people of color, especially black people. But after 2016, and after Trump took sides with white supremacists, sadists and despots, white Americans could not not be aware of what was happening, and eventually, after black people raised hell in the wake of George Floyd’s murder, white people figured out being anti-Trump was like being anti-racist, the consequence being a historic convergence and uprising. (I still think it is, or should be, a pan-religious movement as well as a political one.)

Solidarity can be fragile, though. It takes time for new coalitions to ripen in the form of electoral politics, deepen in the form of policy and programming, and broaden to the point of becoming the conventional wisdom of the status quo. At the same time, white Americans can be fickle allies, as students of black history know, and given that history, it probably won’t take much for white Americans to think the problems we are facing have been solved. All it would take, I would say, is Donald Trump’s defeat.

It’s not hard to imagine, after the results of the election come in, white Americans high-fiving each other before packing it in, leaving black Americans to fight for liberty and justice alone. This scenario is not just plausible, it would be, if it happened, a monumental demonstration of white privilege, a demonstration already being keyed up and primed by a media narrative about a cultural shift among white voters, as if those shifts are permanent, and about Republican lawmakers accepting the inevitable and starting to grieve, all of which suggests to white people the job is nearly done.

It’s not. The conditions that gave rise to a fascist president will outlive him unless white Americans do what they usually have not done: checked their privilege.