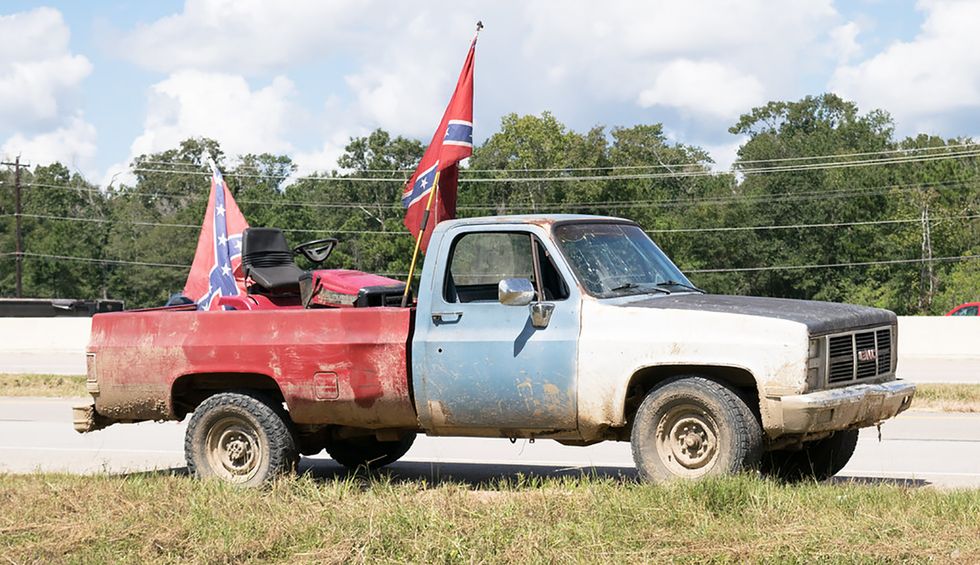 By now it should be obvious to anyone paying attention that Donald Trump is one of the most notorious revisionists of any modern president, routinely authoring his own myths, lies and tall tales to counter the brutal reality of his incompetence, malevolence and despotism. It started from Day One, with his easily debunked insistence that his inauguration generated the largest audience in the history of audiences. His myth-making continues today with his whiny laments about his popularity backed with alleged "Democrat hoaxes" surrounding every one of his obvious crimes.

It's no wonder, then, that Trump is a marketeer for the apocryphal "Lost Cause," the toxic revisionist history that emerged in the decades following the Civil War and continues to flourish today. "History," by the way, is used loosely here, given that the Lost Cause is nothing more than a series of dubiously manufactured myths — counterfactual propaganda designed to absolve southern whites of the sins that precipitated and fueled their separation from, and rebellion against, the United States in the name of preserving the right to own African slaves.

Additionally, the police violence we're witnessing today, along with the arguments of those who defend it, has its roots in the Lost Cause as well. Indeed, so much of the racism that currently exists, 155 years after Robert E. Lee's surrender at Appomattox, is manifested and justified by the myths of the Lost Cause.

Origins of the Lost Cause

In many ways, the Civil War was the prototype for 20th century-style warfare. The military technology that was developed immediately before and during the war vastly outpaced the archaic Napoleonic tactics used during the first several years of Civil War battles. The new rifled musket was capable of firing conical Minié ball rounds faster, farther and more accurately than the old spherical rounds, yet massed armies continued to march in long lines of battle, shoulder-to-shoulder, within close range of the other side, causing a bloodbath of unprecedented magnitude.

Photography, another relatively new technology at the time, would deliver the images of mangled casualties to the public for the first time, leaving no doubt as to the mind-blowing devastation of war. Likewise, nightmarishly awful trench warfare emerged in 1864 — a "dress rehearsal" for World War I, as historian Shelby Foote once described it — adding to the ugliness and carnage. The Victorian "picnic" at Bull Run in 1861 would quickly evolve into the apocalyptic trench combat of Spotsylvania Courthouse and Petersburg three years later.

After the war, while the task of reunifying the nation began to take shape, few observers and participants forgot about the grisly horror show that had occurred. (Contemporary historians suggest that around 750,000 men died in the war, a larger number than was understood at the time — and by far the largest body count of any war in American history.) Someone would have to pay for the carnage, Northerners commonly believed. From there, several schools of thought emerged about how best to handle reincorporating the former Confederate states back into the Union. Radical Reconstructionists wanted to punish the South, executing the perpetrators of secession and redefining the Southern way of life so that secession could never happen again. Others wanted a more moderate, or more conciliatory approach, including Abraham Lincoln and his ham-fisted (not to mention overtly racist) successor, Andrew Johnson.

While Northern politicians and Union generals engaged in shepherding the policies of Reconstruction, authors, journalists and special interest groups sympathetic to the South began work on the reunification of hearts and minds: This was what would eventually emerge as the Lost Cause, a term first coined by Southern author Edward Pollard in 1866. In other words, revisionist historians began to address the task of reunifying white people of the North and white people of the South following so much brutality, with a clear motivation to exonerate southern whites.

The myths of the Lost Cause

The central thrust of the Lost Cause was to reframe the animators of secession — Southern landowners and politicians, along with the insurgents who formed the Confederate military — as having fought for the more "noble" cause of Southern states' rights. The goal was to erase slavery as the obvious and express intention of secession, even though the preservation of slavery is clearly enumerated in the Confederate constitution.

When Donald Trump defended the names of U.S. military bases named for rebel generals, he borrowed directly from the Lost Cause mythology: "These Monumental and very Powerful Bases have become part of a Great American Heritage, and a history of Winning, Victory, and Freedom." The Lost Cause was all about rebranding traitors and racists as having fought bravely for ideals like "heritage," "freedom" and "nobility."

Again, this entirely counterfactual, transforming greedy villains who were responsible for the subjugation of African Americans and the deaths of hundreds of thousands, into kinder, gentler souls who were only interested in defending their cultural heritage and the absolutist interpretation of the 10th Amendment. It's not exactly a shock to learn that Trump and other Republican leaders subscribe to this "cultural heritage" fiction.

As bad as all that sounds, the subsequent myths of the Lost Cause are far more sinister and inexcusable.

One of the most dominant prongs of the Lost Cause was the characterization of Blacks as a common enemy of both northern and southern whites. Mythologists believed that if white people were fighting Black people, then white people wouldn't fight each other again. The goal of smearing African Americans as the enemy of white America involved the whole-cloth fabrication of cultural myths about African Americans, emerging at the dawn of the 20th century and beyond. Architects of the mythology felt that Black people didn't possess a cultural identity and therefore identities could be entirely invented for them by white supremacists.

Prime movers of the Lost Cause taught, therefore, that slaves actually liked being slaves, and were treated better than some whites. Likewise, the myth of Black Confederates, fighting willingly alongside their owners, emerged from similar sources. (In reality, while thousands of Black men accompanied their masters into the Confederate army, they were "camp slaves," not soldiers. There is no reliable evidence that any Black people, free or enslaved, voluntarily fought for the rebel cause.)

Publications and, later, films would portray Black men as unpredictable thieves or as lazy and shiftless "takers," as well as wanton rapists and subjugators of white people.

D.W. Griffith's 1915 silent classic "Birth of a Nation" is the best known cinematic example of Lost Cause myth-making, though other silent films of the early 20th century were arguably more insulting, with titles and plots too horrendous to publish here.

The white protagonist of "Birth of a Nation," fictional Confederate veteran Ben Cameron, invents the Ku Klux Klan to take back his southern heritage. Cameron's KKK is portrayed as an avenging army of swashbuckling heroes who swarm to the rescue of a white woman being surrounded in her cabin by a platoon of lascivious Black soldiers. Naturally, these soldiers are played by white actors in blackface who behave in offensively stereotypical ways.

Black Union soldiers, meanwhile, are shown suppressing and intimidating white voters during Reconstruction. In one scene, several bayonet-wielding Black men disenfranchise white voters at a polling place. Black politicians, including the Silas Lynch character, are unanimously elected to the state legislature via the intimidation of white citizens at the hands of Black troops. The all-Black legislature then goes on to pass laws that strip white people of their right to vote. The politicians, meanwhile, ogle and harass white women in the street, but only when they aren't getting drunk and eating chicken legs.

The Lost Cause in the modern era

The modern Republican "Southern strategy" has been all about exploiting Lost Cause myths to scare white people into voting for GOP candidates. The Reagan-era notion of "welfare queens" played up the "lazy and shiftless" stereotypes of the Lost Cause. The "makers and takers" slogan is a less overt iteration of the same thing.

The Rev. Jeremiah Wright's "God damn America" video was exploited by Fox News and far-right media to scare white people into voting against Barack Obama, who had just about every Lost Cause trope catapulted at him throughout his two terms.

Fox News celebrities like Bill O'Reilly have routinely employed racist myths to attack the Obamas. O'Reilly once defended "the white power structure that controls America." He also said about Michelle Obama, "I don't want to go on a lynching party against Michelle Obama unless there's evidence, hard facts, that say this is how the woman really feels."

Social media memes of Barack Obama dressed as a witch doctor or the Obamas as monkeys or the Obama-era White House lawn littered with watermelons were all pure turn-of-the-century Lost Cause stereotypes.

All told, the Lost Cause has been one of the most successful disinformation campaigns in world history. Its themes continue to be intrinsic to the white misperception of post-Civil War racial history, including Trump's "heritage" defense of military base names, his defense of Charlottesville white supremacists, and his fetish for law enforcement violence. Likewise, his routine attacks against African-American journalists (e.g., Yamiche Alcindor of PBS and Don Lemon of CNN), athletes (e.g., former NFL quarterback Colin Kaepernick) and lawmakers (e.g., "Low IQ" Rep. Maxine Waters) invariably echo the stereotypes of the Lost Cause.

It's no wonder Trump is a proud student of its fiction. The Lost Cause has been so completely absorbed by the confirmation bias of white racists that its lies have become inextricably bound to conventional wisdom, printed and distributed as legitimate history for way too long. This is why it's been so difficult to shake loose, and it's why there's such a powerful movement now against police violence and the continued lionizing of Confederate insurgents. It's taken more than a century to finally begin to pull down some of the literal monuments to the Lost Cause, as well as to successfully achieve bans against the Confederate battle flag.

We're making progress now, but how many African Americans and other people of color have been stripped of their constitutional rights along the way? How many have suffered and died as a consequence of these fictitious justifications for American racism, especially for our history of secession and slavery? The white supremacist mythmakers believed they were keeping the (white) peace after four gruesome years of war, but all they were doing was rationalizing more death — not to mention injustice — at the hands of racist vigilante groups, cops, politicians, corporations and scores of white supremacist followers, all brainwashed by these 155-year-old lies passed off as "history" and "heritage."