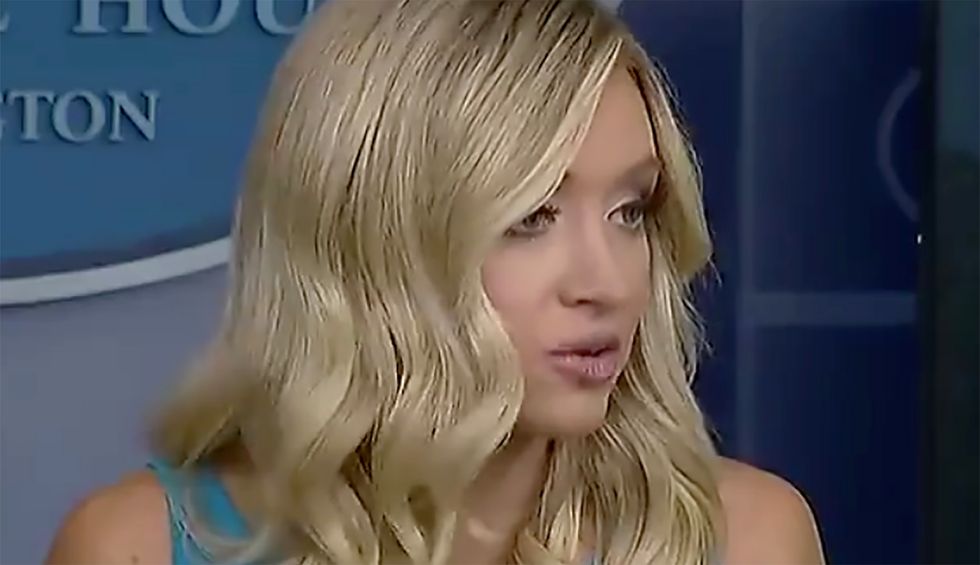 The Trump White House – and the Trump campaign – are desperately claiming rubber bullets and tear gas were not used to clear what by all accounts were peaceful protestors from Lafayette Park and St. John’s Church on Monday. The attack on the protestors took place just before President Donald Trump walked over for his now-infamous Bible-holding photo-op.

“No tear gas was used and no rubber bullets were used,” White House press secretary Kayleigh McEnany told reporters Wednesday afternoon in the latest round of falsehoods from the administration.

When pressed by CNN’s Jim Acosta, McEnany, as she often does, repeated the exact same line: “No tear gas was used and no rubber bullets were used.”

Acosta detailed several personal accounts of people who were victims of the tear gas and rubber bullets, including an Episcopal priest.

“No one was tear gassed, let me make that clear,” McEnany replied. “It’s been confirmed by DOD and by Park Services.”

Earlier Wednesday Secretary of Defense Mark Esper specified that the National Guard did not use tear gas.

Here is the unedited clip from my livestream showing the moments protesters were tear gassed and cleared from Lafay… https://t.co/f8TxikkMLl
— Hunter Walker (@Hunter Walker) 1591114417.0

MSNBC’s Garret Haake was on the scene Monday when protestors were attacked with tear gas and rubber bullets. He denies that any violence was taking place against any law enforcement officers.

“I want to be super clear about what did and didn’t happen. Nothing happened on the side that the protestors were in,” Haake said, Monday, noting that he had been there since 2 PM. “It was by far the most peaceful day of protests that we’ve had in D.C. since this started.”

He went on to say that “mounted federal police” came by before the curfew went into effect “clearing people out of the street. In front of them they were using flash bangs, tear gas, I lost my regular mask and had to replace it with my gas mask.”

“That’s what the tape shows, that’s what history’s going to show,” Haake, somewhat agitated, added. “I’m a little shook by the whole thing, to be completely honest.”

Here’s an NBC News report from Tuesday on the use of tear gas, “so that President Trump could visit that historic site.”

And yet, the U.S. Park Police are telling a very different – and very false – tale. But they admit to using “pepper balls” and “smoke canisters.”

“To curtail the violence that was underway, the USPP, following established policy, issued three warnings over a loudspeaker to alert demonstrators on H Street to evacuate the area. Horse mounted patrol, Civil Disturbance Units and additional personnel were used to clear the area. As many of the protestors became more combative, continued to throw projectiles, and attempted to grab officers’ weapons, officers then employed the use of smoke canisters and pepper balls. No tear gas was used by USPP officers or other assisting law enforcement partners to close the area at Lafayette Park. Subsequently, the fence was installed.”

As The Washington Post reports, pepper spray is “one of the most commonly used tear gases in the world.”

And the CDC agrees.

“According to the Centers for Disease Control and Prevention: ‘Riot control agents (sometimes referred to as ‘tear gas’) are chemical compounds that temporarily make people unable to function by causing irritation to the eyes, mouth, throat, lungs, and skin.'”

The Post also notes the Trump re-election campaign is contacting media outlets demanding they correct the record, to say tear gas was not used. Media Matters published their response.

So were rubber bullets.