Watch: White Arizona 'Karen' gets a literal slap in the face after grabbing Hispanic woman and telling her she's ‘going back to Mexico' 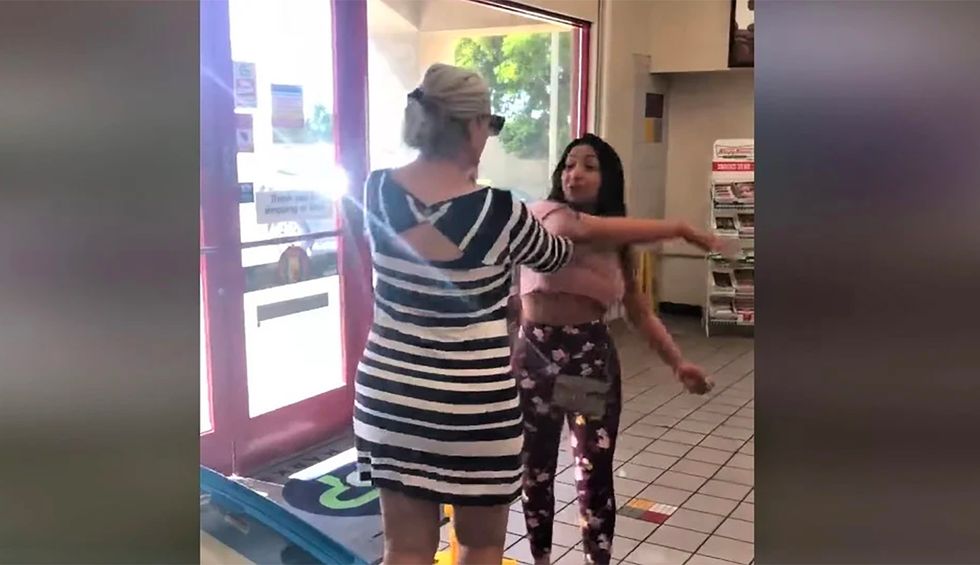 During the Trump era, one has seen a pattern of racists telling people of color to go back to the country they came from — even if they were born and raised in the United States. One such incident, according to TMZ, occurred at a gas station/convenience store in Phoenix on June 6, when an older white woman got into a heated argument with a young dark-skinned woman. And the younger woman, the video shows, was not shy about defending herself.

The older woman, who was described as a “Karen” by the man who filmed the incident with his cell phone, was upset because the gas pump outside wasn’t working — and when she got into an argument with the younger woman inside the convenience store, she told her to go back to her country. The older woman demanded to know, “Where were you born?”; the younger non-white woman responded, “Where were you born, bitch? I was born in America, bitch. Where are you ancestors from? They’re not from this country.”

And the older woman was also upset with the man who called her a “Karen” and was filming the incident, telling him, “You will leave too.”

The “Karen” meme has been inspiring a lot of debate on the left. According to the meme — which has become popular among some liberal Millennials and members of Generation Z — a “Karen” is a demanding, entitled middle age white woman or suburban soccer mom who makes life hell for underpaid workers in the service sector. Typically, the meme says, “Karen” demands to speak to the manager.

Some feminists consider the meme sexist and ageist, but others on the left — including the Washington Post’s Karen Attiah, who is African-American — have defended it as a perfectly legitimate attack on white privilege and class privilege.