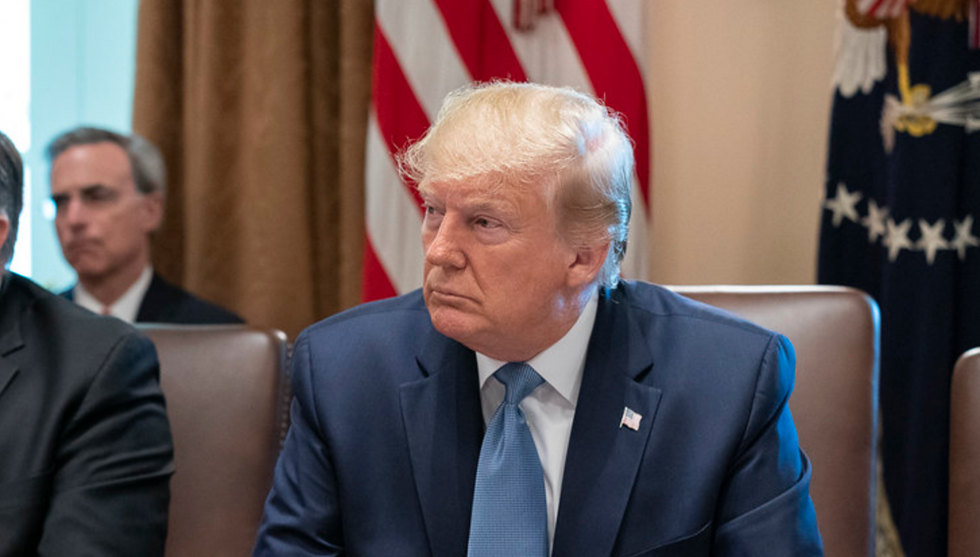 President Donald Trump had an uncharacteristically subdued response on Monday when asked about a major Supreme Court decision.

During an exchange with reporters in the White House, Trump was asked for his reaction to the 6-3 decision in Bostock v. Clayton County. Justice Neil Gorsuch rocked the country with a decisive and monumental ruling preventing employers from discriminating against workers based on sexual orientation or transgender identity as an application of the Civil Rights Act. Chief Justice John Roberts, along with the court's four liberals justices, joined the majority ruling.

This is notably muted because the Trump administration argued against expanding protections to LGBTQ people. And Trump often refuses to take "no" for an answer. When the president previously lost the fight over the census citizenship question before the Supreme Court, he made a show of trying to work around the court's decision. Now, he seems to be solemnly accepting a loss — not something the president is known for.

It's not entirely necessary, either. While the Supreme Court's ruling on these cases is final, the question came down to a matter of statutory interpretation. This means that, if it were so motivated, Congress could simply amend the statute to clarify that it does not apply to LGBTQ people.

Congress won't do this, of course, because it would be wildly contentious and the Republicans don't have the votes. But Trump could advocate for the change, if he wanted to, as he advocates for other policies that have no chance of passing Congress.

So why the subdued reaction instead? I think there are several factors at play.

While Trump knows that he relies on his evangelical base of support, he has never seemed to genuinely share the animosity toward LGBTQ people that some of his allies have. He clearly has swallowed the anti-abortion rhetoric completely, and he will spout inflammatory rhetoric about Democrats killing babies to get his base riled up. But he doesn't launch these kinds of fearmongering attacks about gays and lesbians. And while he has taken many actions as president that actively hurt trans people, he doesn't take the same glee in it that he does in, say, denying the claims of asylum-seekers.

For whatever reason, he's just not as animated by the anti-LGBTQ rhetoric. Perhaps he perceives that it's just not that popular, in contrast to his anti-immigrant rhetoric, which he believes is central to his political appeal.

The other reason Trump is likely hesitant to wade deeply into this topic, though, is because of what is says about Gorsuch. Trump knows how crucial the appointment of Gorsuch, and later Brett Kavanaugh, was to his 2016 victory. Many of his conservative defenders have looked past his many flaws and supported him in no small part because of the impact a Republican president will have on the Supreme Court and the judiciary as a whole. Trump is comfortable attacking Roberts, appointed by President George W. Bush, because he's not responsible for Roberts. But Trump is the reason Gorsuch is on the court; he could have chosen someone else. If Gorsuch is wrong, Trump can be blamed.

In this ruling, Gorsuch has profoundly supported many of his defenders. They believed that his judicial philosophy would result in rulings that align well with the conservative worldview. But in this case, Gorsuch's version of textualism, he argued, led him to a conclusion at odds with what much of the right-wing had hoped for.

This is disappointing in this case, but it's also terrifying for them more broadly. It means they can't have confidence that Gorsuch will consistently be in their corner, which is the reason so many of them were delighted to see his appointment in the first place.

The question is whether this really will reflect on Trump in the eyes of voters. Will GOP voters decide they've been betrayed, that Gorsuch didn't give them what they wanted, so there's no point in voting at all? Maybe some will, but it's unclear whether such sentiments will be widespread enough to affect the outcome of the 2020 race. Gorsuch does, no doubt, remain on the right wing of the court, and there will certainly be many future decisions in which he delivers for the GOP, as he has in the past. It seems overwhelmingly likely that he will cast votes in favor of rolling back constitutional protections for abortion in the near future, one of the issues the religious right cares most about.

But in this case, Gorsuch has shown a sign of independence. And that's something Trump would rather not draw any more attention to than is necessary.

Watch the clip of Trump's comments below:

Trump, who considers himself a hero to the LGBTQ+ community, is visibly upset when asked about the landmark SCOTUS… https://t.co/OkQzFxGY9i
— Brian Tyler Cohen (@Brian Tyler Cohen) 1592253435.0