Trump's Justice Department finds yet another way to oppress minorities 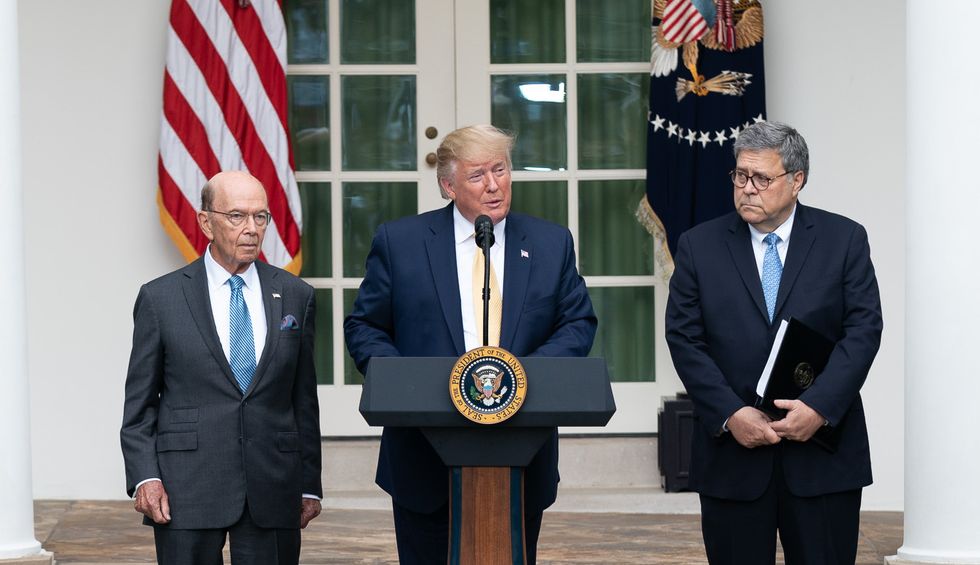 President Donald J. Trump, joined by Secretary of Commerce Wilbur Ross, listens as U.S. Attorney General William Barr delivers remarks Thursday, July 11, 2019, in the Rose Garden of the White House to expand on President Trump’s Executive Order requiring every department and agency in the federal government to provide the Department of Commerce with all requested records regarding the number of citizens and non-citizens in the United States. (Official White House Photo by Shealah Craighead)
David Cay Johnston
,
DC Report
and
DC Report
June 11, 2020

As Donald Trump calls for suppression of Black Lives Matter protests against police abuse, new data reveal another form of Trumpian suppression of minorities. His administration is failing to enforce laws against racial discrimination in lending.

Yet Trump’s Justice Department is nowhere to be found. It referred only four fair-lending cases in 2018, one of which had nothing to do with race or national origin. Those four cases represent an 84% drop from the Obama administration’s annual average of 25.5 cases. Further, government files show that the Trump administration is closing out Obama era cases more than pursuing new ones.

In Trump World, however, any enforcement action involving anti-discrimination law gets promoted as substantial no matter how minuscule the money or how narrow the case.

Plenty of evidence exists that many financial firms violate federal law by routinely mistreating minorities. The lack of enforcement by Trump & Co. prompts a question from Bill Dedman, the Pulitzer Prize-winning investigative reporter who in the 1980s proved pervasive redlining—discriminating against mortgage seekers in minority neighborhoods. LDedman has shown that it remains a persistent major problem.

BMy another measure fair lending cases have fallen to an average of 2.5 per year under Trump, from 13.1 under Obama and 3.3 under George W. Bush, Dedman said.

He asked, “Has discrimination declined suddenly? Has the Justice Department under Trump changed policies? Or have the banking regulators?”

The answer is clear—Trump & Co. don’t give a damn about black, brown and other people discriminated against in financial matters.

The proof is in how they respond to evidence of discrimination. The response is not proportional but weak.

Read down to the details, scant as they are, in Assistant Attorney General Eric S. Dreiband’s report and you’ll find only a handful of cases. All were dispensed with as the regulatory equivalent of parking tickets.

Civil rights groups opposed Dreiband’s 2018 nomination as assistant attorney general for civil rights. He was confirmed with the bare minimum of 50 Senate votes.

Consider Robert N. Hatfield of Wilkesboro, N.C., who buys, sells and finances real estate and rents housing. Since at least 2004, he groped women, offered discounts for sex and retaliated against those who refused, the Justice Department stated in court papers. Hatfield could have been referred for criminal prosecution, but the Trump administration let him off with $550,000 that he is supposed to pay his victims and a $50,000 fine.

Dreiband also cited his office’s $1 million settlement with Pacific Mercantile Bancorp, an Orange County, Calif., lender accused of overpricing loans to minorities. The bank’s report to shareholders reveals that the case began in 2016, which means under the Obama administration. That raises the question of whether the Trump administration let the bank off cheap, as it has done in many separate cases at various regulatory agencies.

Then there’s Home Loan Auditors LLC, accused by the Obama administration of running a “predatory mortgage rescue scheme” that abused California Hispanics. It charged $5,000 and up for supposed “low value” audits and gave bad advice, the Justice Department said.

The Trump administration’s achievement ballyhooed in its latest report? It tacked on a seventh case, affecting two people and less than $100,000.

But it’s not just in housing where the Justice Department was so unaggressive. It also looked out for discrimination in car loans. Its primary example? Failure to refund prepaid fees to people who leased BMWs.

But Team Trump didn’t turn a blind eye to people whose circumstances would not put them behind the wheel of a German luxury car, even a leased one. Dreiband also brought a case against California Auto Finance, a subprime auto lender.

This case is revealing because it did not assert overall foul practices or any broad pattern of discrimination. Typically, the federal government looks for cases that will make a statement that discourages others from misconduct, a policy known as general deterrence. The idea is that similarly situated people read about what happened to someone in their circumstances and decide to behave lawfully.

But this case was specific—very specific. It involved Andrea Starks. In 2015, she bought a nine-year-old Chevrolet HHR, a small sport utility vehicle, for $7,583, plus another $989 in fees, from an auto dealership that was unnamed in the Justice Department’s lawsuit. California Auto Finance loaned Starks $7,572 at an eye-popping 24% interest rate.

Eight months later, California Auto Finance repossessed the car without a court order, three weeks after Stark joined the U.S. Army. That repossession violated federal law against repossessing the cars of enlisted military personnel,  although Starks was a private citizen when she bought the car and when she fell behind on her payments.

Starks, an Army specialist (responsibilities of a private, pay of a corporal) stands to get $30,000 in recompense while the lender is to pay a $50,000 fine to Treasury.

The facts in this specific case can reasonably be viewed as a scheme to get the car and evade payment by enlisting. But a larger issue is the use of the Justice Department in such a small and unique case rather than as the prime example in a broad case against abusive lenders.

So why not go after the many financial firms that routinely abuse soldiers and sailors by the thousands, as my dogged colleague at The New York Times, Diana B. Henriques, documented in articles over seven years here, here, here, here and here?

Of course, filing cases when military personnel are abused is not the only way to fight discrimination. There’s public education, too.

Dreiband boasted that “during 2018, the Department gave presentations on the” Service Members Civil Relief Act from lender abuse “at 14 events nationwide.” Two million Americans under arms and 14 events. So impressive. When it comes to fighting racial discrimination, the Trump administration is so very, very impressive.