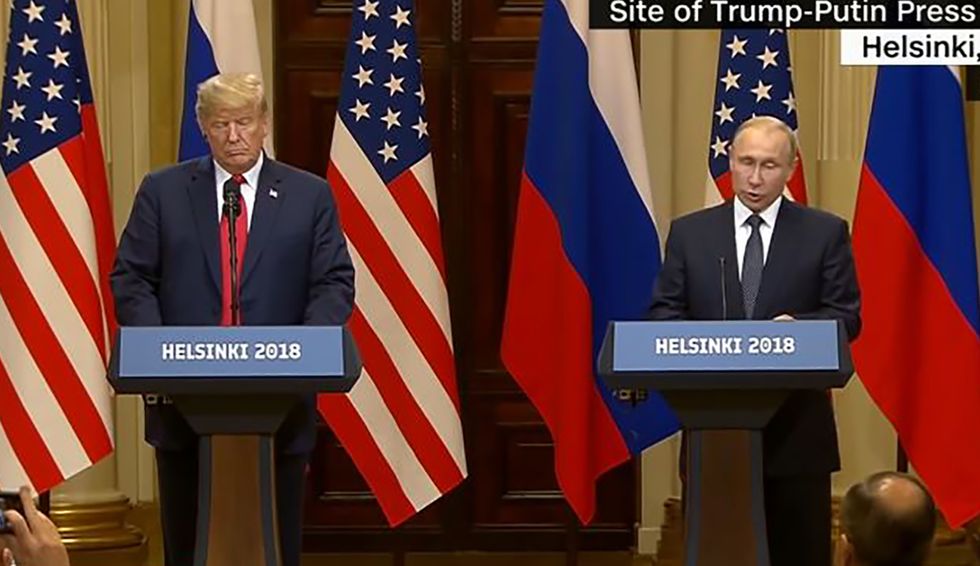 It seems as if it happened ages ago, but you may recall that at the beginning of the year the United States came very close to going to war with Iran. There had been a number of skirmishes over the previous months and Iran's proxies had been lobbing rocket attacks at bases in Iraq, none of which was particularly unusual. But after an American contractor named Nawres Waleed Hamid was killed in one of those attacks, the Trump administration decided to retaliate by assassinating Iran's most illustrious military leader, Gen. Qassem Soleimani. It was an extreme provocation and only the surprising forbearance of the Iranian leadership prevented the region from being plunged into war.

After some very tense days in both countries, the crisis passed and we immediately turned our attention to President Trump's impeachment trial in the U.S. Senate.

At the time, Trump was reported to have been so upset by the death of this American contractor that he simply couldn't let it pass, so he almost launched a major new war in the Middle East. It's interesting, then, that the New York Times reported this past weekend that Trump was told that Russian agents had put a bounty on American soldiers' lives in Afghanistan and didn't even bother to issue a warning to the Russian government.

Of course, Trump's record on empathy for the deaths of American troops, even soldiers in distant lands, isn't exactly stellar, so isn't entirely surprising. His excuse for the Soleimani assassination was an anomaly. But still, putting a bounty on Americans is an extremely provocative act; one would expect some kind of response.

According to the Times, and as later confirmed by the Washington Post and the Wall Street Journal, Trump was briefed on this in March, but made a great show of insisting that Russia be allowed back into the G7 throughout this past spring so he didn't seem overly concerned. Setting aside the pretext for the Soleimani assassination, he is typically very cynical about these things. (Recall that he excused Russian President Vladimir Putin's killing of journalists by saying, "Well, I think that our country does plenty of killing, too.")

Since the story broke, Trump and the White House have offered a number of responses. Trump tweeted that he knew nothing about this and was never briefed. He also mischaracterized the story and said, oddly, that "there have not been many attacks on us." Is the thinking here that even if it did happen, we didn't lose many people, so what's the big deal?

The president carried on with his weekend, playing golf with Sen. Lindsey Graham, R-S.C., tweeting incessantly about the arrests of four people for defacing a monument, and otherwise acting entirely unconcerned about this story.

His completely unqualified and sycophantic minion John Ratcliffe, the new director of national intelligence, weighed in to say that Trump hadn't actually been briefed. The White House did the same. You'll note that Ratcliffe didn't deny that the story was accurate, which means the intelligence community really dropped the ball if they didn't bother to tell the president about it, especially while he was out there pushing hard for Russia to be allowed back into the G7.

"The White House statement addressing this issue earlier today, which denied such a briefing occurred, was accurate… https://t.co/6HQPNSYOCv
— Office of the DNI (@Office of the DNI) 1593314363.0

Trump finally stepped up on Sunday night and suggested that the whole thing is a hoax, as we all knew he would.

Since Graham had spent the day on the golf course with Trump, this is a strange exchange. Did the subject not come up? But more importantly, in none of these tweets and statements does the president indicate even the slightest interest in finding out more about this. Nor does anyone seem even slightly interested in why the intelligence professionals wouldn't tell the president about such a thing, even if it were just a rumor. The story says they found piles of American money — and you know Trump would at least be interested in that.

The Office of the Director of National Intelligence, which last night said Trump and Pence never got a briefing on… https://t.co/KgNLeDE21c
— Josh Lederman (@Josh Lederman) 1593359070.0

We know for sure Trump doesn't read his daily briefings, and we know that he gets angry whenever someone brings up Russia in the truncated oral briefings he prefers. You may remember that he also wanted to personally hold peace talks with the Taliban at Camp David, planning a surprise summit that fell apart after the Taliban killed an American and 11 other people in a car bombing just before the meeting. (I wonder if that one was part of the bounty scheme?) Perhaps intelligence briefers didn't want to combine bad news by suggesting that Russia and the Taliban, Trump's supposed partners in peace, were actually sabotaging him.

It's also possible that, just as Trump was so consumed by his "big trade deal" with Chinese President Xi Jinping last January that he ignored all the alarm bells about the growing threat of a pandemic, this spring he was obsessed with planning his big G7 pageant hosted by the U.S. (but sadly, not at his Doral golf resort, as he had once proposed). He wanted to show off for Putin, get him back in the club and put on a big extravaganza just before his convention. He didn't want to get into a beef over something silly like a few dead American soldiers. How would that help him get re-elected?

Considering Trump's total lack of empathy for the 128,000-plus people who have died of COVID-19 in just four months, I think there's also a good chance that his aides told him about this, he only halfway listened and didn't much care. After all, it's obvious that Trump is more concerned about saving the statues of dead Confederate generals than he is about saving the lives of American citizens.

Little did we know, back in 2016, that when Trump blithely excused Putin's assassinations of his own people by saying "our country does plenty of killing, too," he saw that as part of his job description.
From Your Site Articles
Report typos and corrections to: feedback@alternet.org.
#story_page_post_article