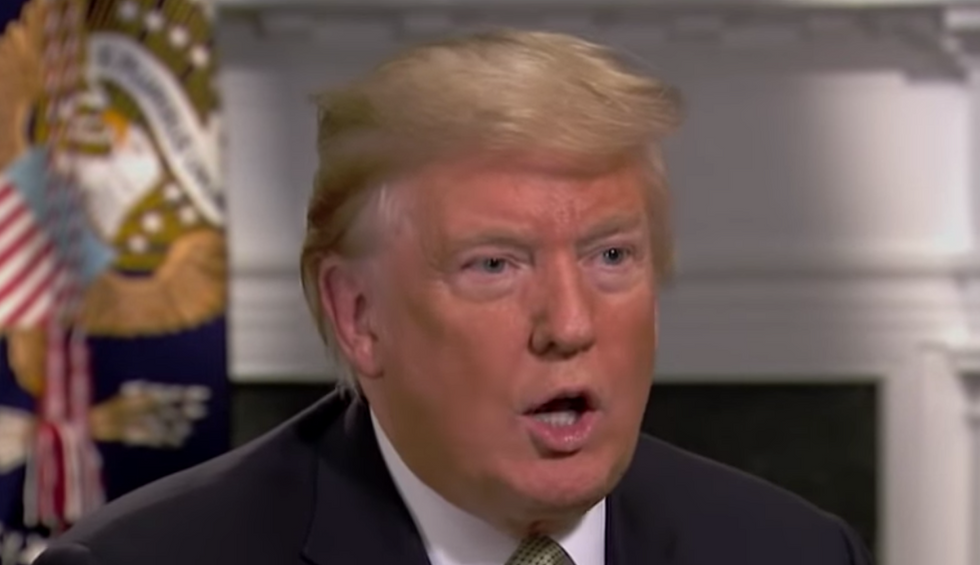 Donald Trump is not an ideas man. This has been a defining feature of his presidency. He's not a learned policy wonk, understanding the complex nuances of law and governance. He is, at his core, just a former game show host and a con man.

Never is this more clear than when reporters ask him about public policy problems he's not prepared for. (Of course, even on topics where Trump should be prepared, like health care, he struggles to put together a coherent thought.)

This happens even with friendly outlets. On Wednesday, Trump appeared with Fox News host Brian Kilmeade on his radio show. And in an exchange flagged by CNN's Daniel Dale, Kilmeade asked a surprisingly decent and provocative question.

Trump had no idea how to respond, so he just rambled. But his rambling was revealing. It's worth quoting the entire exchange in full:

According to an Axios-Ipsos poll, 70% of white Americans say they trust the local police. Only 36% of African-

Americans do. How do you attack that problem? How do you change things?

T: Well I think you have to get better than what they’ve been doing. I mean obviously that was a terrible thing. And I’ve spoken about it numerous times in various speeches. And you know, it’s interesting: I spoke about it when we launched a very successful rocket -- a tremendous program that culminated on that day and obviously it goes on from there. But I then made a speech and it was a speech about the rocket, and I devoted 25% of the speech probably to what happened -- or more -- to what happened with respect to George -- George Floyd, and it was -- and then you listen to news, ‘He doesn’t talk about George Floyd.’ The rocket went off, I then I made a speech, and I talked about George Floyd, but they said he didn’t talk about George Floyd. Half -- maybe even almost half of the speech, but a large portion of the speech was devoted exactly to that. And so, you know, with — with the media you basically -- basically no matter what you do, it’s never going to be good enough. But the people understand it.

I’m able to get my word out beautifully by social media. Fortunately. You use social media too.

T: But we have to get the word out. Look, we have to -- Brian, we have to get the police departments, everybody has to do better, has to do better. This is a long-term problem. This didn’t happen today. This happened — I mean, a guy like Sleepy Joe Biden was in there for 43 years, then he says, ‘I think we should do this’ -- I saw today, he took his mask off for the first time in a while, I haven’t seen his face for a long time. And he said, ‘I think we should do this,’ or ‘I think we should do that.’ And actually then he started speaking through the mask again. He feels comfortable with the mask on, I think, and — even though there was nobody anywhere near him, which is interesting. But he made a statement about what he should do. I said, he’s been there for 43 years, he was vice president for 8 years, he didn’t do a thing. His crime bill was a disaster.

When asked about African-Americans, Trump did what he normally does and began talking about the economic success the country enjoyed before the pandemic. His claiming credit for this success is highly dubious and contestable, and it was completely unrelated to the question asked. So Kilmeade asked again.

And still, Trump had nothing to say. So again, he just started talking about himself. He reverted to a comfortable topic, claiming that the media was unfair because it supposedly ignored his comments about George Floyd's death when he appeared at NASA. But what he's really demonstrating is that he has no ideas for how to actually address the problems the protesters are calling out. He seems to either be convinced that what he has said about Floyd should be enough to solve the problems, or he's unable to comprehend that there are concerns about public policy that have nothing to do with him in particular.

Finally, he launched into a meandering rant about Biden, suggesting that under the Obama administration, nothing was done to fix policing in the United States. While the previous administration surely didn't do enough, and Biden himself has contributed to the criminal justice problems in the country, Trump completely ignored the fact that the Obama Justice Department actually did take significant steps toward reform following the protests in Ferguson. Under Trump, those efforts were rolled back.