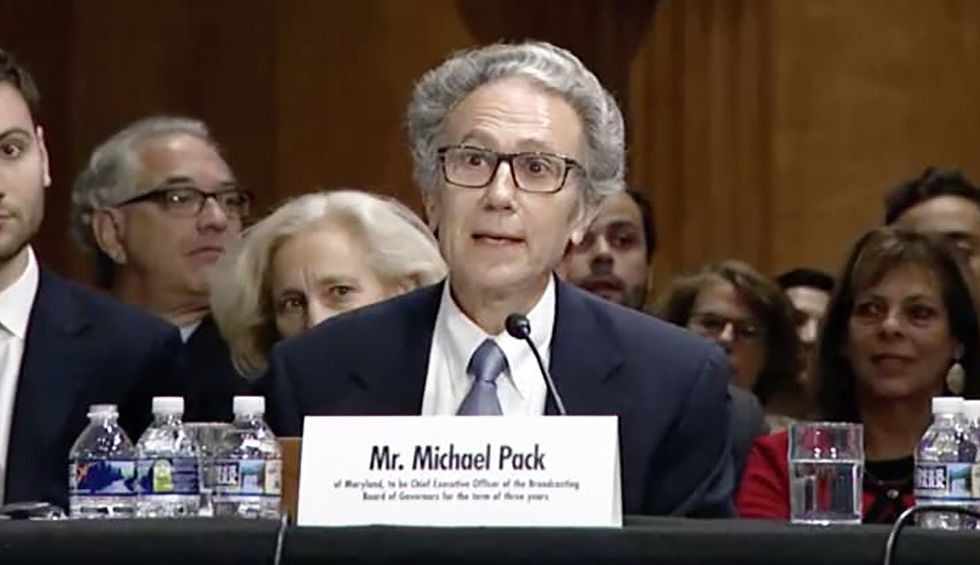 President Donald Trump’s handpicked appointee to head the U.S. agency that oversees the venerable Voice of America and related non-partisan government-backed news agencies around the world has just fired his agency chiefs, and is replacing them and members of their boards of directors with allies of the President of the United States, the Associated Press reports.

Michael Pack, the brand new CEO of the U.S. Agency for Global Media, reportedly hasn’t shown up for work since being confirmed by the Senate on June 4, but managed to fire the heads of Radio Liberty/Radio Free Europe, Radio Free Asia, the Office of Cuban Broadcasting, and the Middle East Broadcasting Network. The heads of Voice of America resigned Monday in protest of Pack’s appointment.

Pack is a conservative filmmaker who The New York Times calls “a close ally of conservative activists and Mr. Trump’s former chief strategist, Stephen K. Bannon.” Bannon, who supports white nationalism, is the former editor in chief of Breitbart, which he once bragged was the home of the alt-right. In 2018 Bannon told a far-right French group: “Let them call you racists. Let them call you xenophobes. Let them call you nativists. Wear it as a badge of honor.”

“VOA is a rotten fish from top to bottom,” Bannon claimed in 2018, as NPR reports. He alleged it was “totally controlled by the deep-state apparatus.”

NPR adds that Pack on Wednesday “dissolved advisory boards over each of the networks and placed his own aides above them. He gave no reason for his actions other than his authority to do so.”

President Trump pushed through Pack after being furious that Voice of America was not repeating the administration’s talking points against China. The White House Deputy Chief of Staff for Communications falsely claimed Voice of America was publishing the communist Chinese government’s information.

The appointment of Pack, and now his installation of Trump allies immediately decimates the integrity of what were once seen around the world as reliable and independent news outlets, and in fact, “one of the largest media networks in the world,” the Times notes. Ethics expert Walter Shaub calls it “being Breitbartized,” while a few others are likening Voice of America to Pravda, the notorious mouthpiece “news” agency for Russian President Vladimir Putin.

Pack is under investigation, accused of funneling funds from a non-profit he founded into his commercial business. Despite the investigation by the Attorney General of Washington, D.C., the Senate confirmed Peck on a 53-38 vote.

Shaub, the former Director of of the U.S. Office of Government Ethics, issued a strong warning this week: “The Breitbart crowd may be getting a taxpayer-funded global platform.”