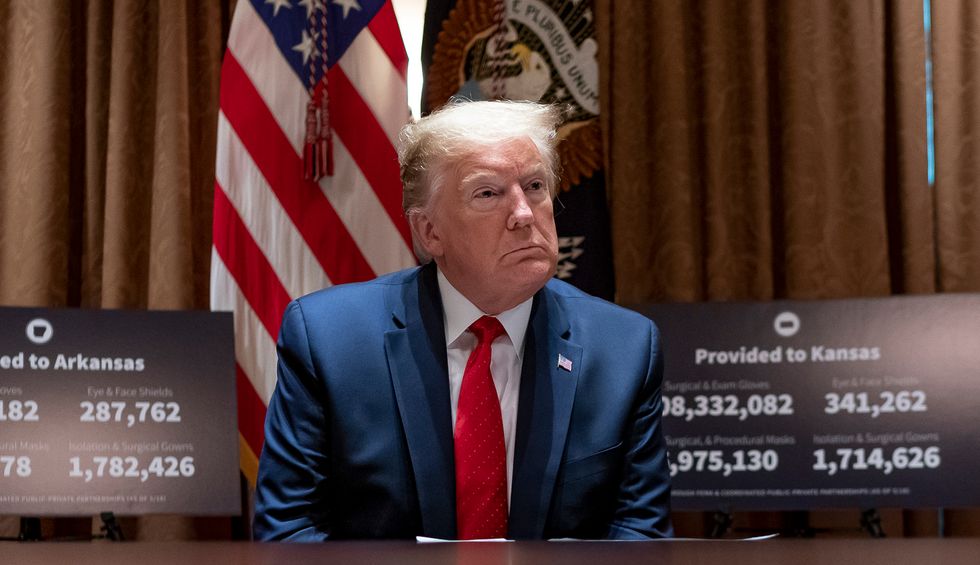 For all of Donald Trump's alleged branding genius, he never seems to come up with anything original. In business he just slapped his name on any consumer item that would pay him a couple of dollars for the privilege. In politics he's stolen his slogans from previous presidents. His most famous, "Make America Great Again," was Ronald Reagan's campaign slogan in 1980. And he seems to be under the impression that these two, which he's used intermittently before but is rolling out again, are Trump originals. They are actually patented Richard Nixon lines:

On some subconscious level these phrases connect with ideas Trump has heard before, but his narcissism requires that he convince himself he actually thought of them. If only he had a real grasp of history and the same level of competence as even the worst and stupidest of his predecessors, the country might not be in the situation it is in today. His handling of this latest crisis makes all of them look like geniuses by comparison.

After spending the weekend holed up in the White House watching TV and tweeting nonsense, Trump heard that people were saying he was cowardly for reacting to the protests in Washington by rushing down to the White House bunker and turning off the lights, like an old guy avoiding trick-or-treaters on Halloween night. He became upset and worried that would affect his re-election campaign so he projected his own shortcomings by getting the state governors on the phone so he could yell at them, calling them "weak" and insisting they must "dominate" their citizens. He showed them who's boss by threatening to unleash hell by deploying the military on anyone who didn't "get control" of the protests.

Apparently, this made him feel better because he then gathered his advisers together to decide how to calm the unrest by further demonstrating his heroic manliness to the world. According to various reports, either he or his daughter Ivanka came up with the crackerjack idea of giving a Rose Garden statement and then walking to the boarded-up church across the street to pose for a picture holding a Bible.

Apparently, the fearless leader didn't want to walk near any of the protesters who were gathered in the park nearby so Attorney General Bill Barr, apparently under the impression that he directly commands federal police forces, ordered the gathered troops in Robocop uniforms to disperse the protesters so Trump could have his photoshoot. We all saw what happened as they aggressively drove groups of nonviolent protesters away, deploying smoke bombs and pepper balls, and knocking down anyone who stood in their way, including members of the press.

Trump gave his speech, threatening that if the states didn't call in the National Guard and quell disorder he would unilaterally invoke the Insurrection Act — a law that has rarely been used, and never for this purpose — to send in the military. Flanked by the secretary of defense, the attorney general, his national security staff and the chairman of the Joint Chiefs (unaccountably dressed in full battle fatigues) he lumbered over to St. John's Episcopal Church to get his picture.

It was a PR disaster of epic proportions.

The New York Times declared that "when the history of the Trump presidency is written, the clash at Lafayette Square may be remembered as one of its defining moments," an act of unprovoked violence against peaceful protesters for the purpose of "a ham-handed photo opportunity."

On Tuesday, Trump returned to tweeting the usual babbling nonsense, claiming that "My Admin has done more for the Black Community than any President since Abraham Lincoln" and complaining that "Democrat"-run cities were conspiring with Antifa protesters (or whomever) to hurt his re-election chances.

American presidents have often had to deal with protests and civil unrest. It is part of our political culture and the right to express your grievances in public is guaranteed by the Constitution. You'd have to go back quite a way to find a president unilaterally using the military to quell an uprising:

After President Hoover in 1932 ordered US Army to disperse unarmed vets marching in DC to demand their World War I… https://t.co/F7jsve2NeX
— Michael Beschloss (@Michael Beschloss) 1591123815.0

As president, Eisenhower too used military troops for a domestic purpose when he sent the 101st Airborne to Little Rock, Arkansas, in 1957. That was to protect the rights of nine African American students who were being blocked from attending a previously all-white high school, in direct defiance of a U.S. Supreme Court decision. It's hard to think of a reason for doing so that has less in common with Trump's threats and demands for "dominance."

In the following years, there was massive social unrest with large antiwar protests and demonstrations for civil rights. President Lyndon B. Johnson responded to the massive peaceful civil disobedience and protests led by the Rev. Martin Luther King with a commitment to passage of civil rights legislation. Bill Moyers, who was White House press secretary at the time, has said many times that LBJ told King in their private meeting that the threat of civil disorder was necessary to provoke action from Congress.

When the war in Vietnam likewise brought people into the streets, and the "long hot summer" of 1967 followed by the King assassination in 1968 led to the largest wave of urban "rioting" before this week's protests, Johnson was forced to announce he would not run for another term in the 1968 election.

As I mentioned, Richard Nixon then successfully deployed the slogans "Law and order" and "the silent majority." But as historian Rick Perlstein points out in Mother Jones, those slogans didn't help Republicans in the 1970 midterm elections. Voters tend to hold incumbents responsible for whatever social unrest happens on their watch, and Nixon owned plenty of it by that time. Someone might want to give Trump a word to the wise.

George H.W. Bush had the "Rodney King riots" of 1992. Bill Clinton dealt with a wave of right-wing violence. George W. Bush had 9/11 and the massive Iraq war demonstrations. Barack Obama tried with grace and dignity to heal a country torn apart by horrific mass shootings and worsening racial violence.

Those presidents may have dealt with those crises well or poorly. None of them was perfect. But none responded by whining publicly that it was all a conspiracy to damage them politically. Right or wrong, none of them used the crisis as an excuse to stage a photo-op for a campaign ad.

Trump only knows how to put on a show, and that's all he is doing. But it's a dangerous show. He is inciting his own voters with this loose talk about "domination," and deliberately creating an environment that could lead to disaster if someone, somewhere, makes a tragic mistake. Real leaders try to calm the waters in these situations in order to reduce that risk. He is doing the opposite.

You can see people around the country trying to do the right thing in spite of Trump's counterproductive aggression. Police around the country, at least in some instances, are taking a knee and joining protests, seeking to reduce the tension. People on both sides are trying to talk to each other. There is a way forward if everyone can find some common ground.

But don't expect this president to lead the way. Trump doing something like that is as likely as him inviting Colin Kaepernick and Barack Obama to the White House and the three of them taking a knee in the Rose Garden. That photo-op might just mean something. But Donald Trump is much too weak to do anything that strong.