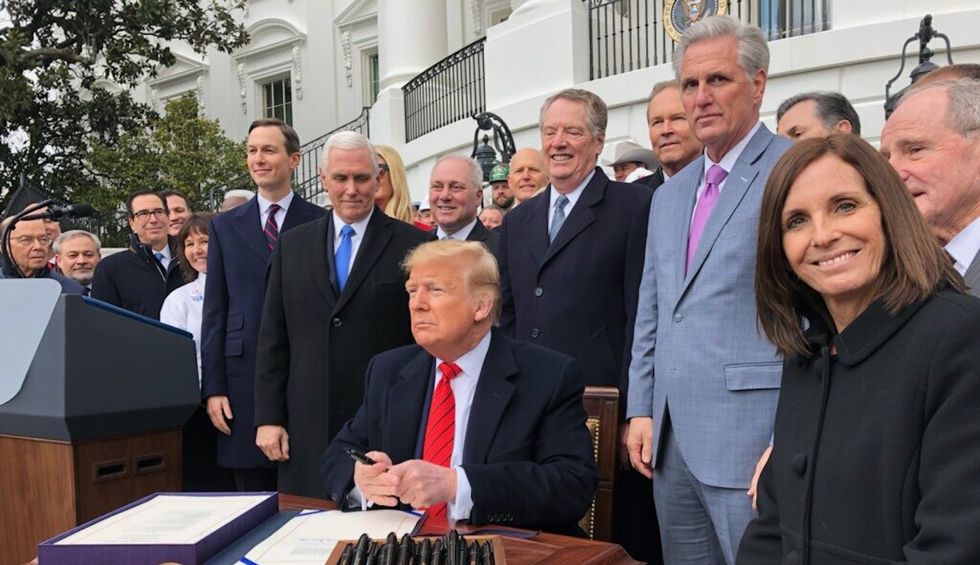 In a column for the Daily Beast, longtime political observer Michael Tomasky wrote that Donald Trump and Republicans hoping to ride their coded language and veiled racist rhetoric to victory in November are starting to realize it is no longer working on voters and they are “terrified.”

With the public in an uproar over the murder of George Floyd — among others Black Americans  — at the hands of police, the columnist suggested that we have possibly entered into a new era where one of the Republicans major talking points come election time are falling on deaf ears as voters increasingly reject racist appeals for their votes.

Noting the Republicans and the president likely “hate” the change in attitude, Tomasky points out that their future as a governing party hangs in the balance if they don’t adapt to evolving attitudes in a country that is rapidly becoming more diverse.

The columnists notes that for years Republicans have been known to “Cheat black people of their proper political representation. Curtail their civil rights. Slash programs that help minority businesses and poor people. Invent phrases like ‘race-neutral’ to hang a veil over rank discrimination,” using racist ‘dog-whistling’ to reach their base.

Now, he notes, it is no longer working.

“What’s happening now terrifies them because they all know one simple thing, which they’ll never admit: If the white middle class rejects en masse racially discriminatory behavior and racially coded messages, they’re cooked,” he wrote before adding, “Mind you, as heartening as these last few weeks have been, that’s still a big ‘if.’ Let’s not declare victory here. But we are seeing historic breakthroughs. Polls suggest a good two-thirds of the country will not buy that GOP hoodoo juice anymore.”

With that in mind, the columnist suggested that Trump, who is still cheering on police attacking anti-police brutality protesters led by Black Lives Matter movement is coming apart at the seams over what is happening.

“He is really and truly losing it. You can see it. He’s unraveling, like Queeg on the witness stand. ‘The black people” stole those strawberries! Send in the troops! Fred McMurray, fetch my Bible!'” he wrote before adding that it is not just the president — the entire Republican Party has feeding on racist tropes for years — and now it is coming him to roost.

“It’s not just Trump. It’s never just Trump. It’s the party. Yes, Trump made the racism more flagrant and open. But ask yourself why the party embraced an open racist to begin with. It was because so many predecessors made that road by walking it before Trump came along,” he explained before suggesting voters may see the first inklings of change coming in an upcoming bill in the Senate led by Senate Majority Leader Mitch McConnell (R-KY)

“We sit at such an inspiring turning point. I am grateful to be alive to see it. Remember how in the ’60s they sang ‘we shall overcome someday’?” He wrote before concluding, “Well, someday may finally be approaching, a reality made all the sweeter by the knowledge that its enemies, stupid and vindictive and embarrassing finally even to NASCAR officials and Clemson University, helped hasten its arrival.”