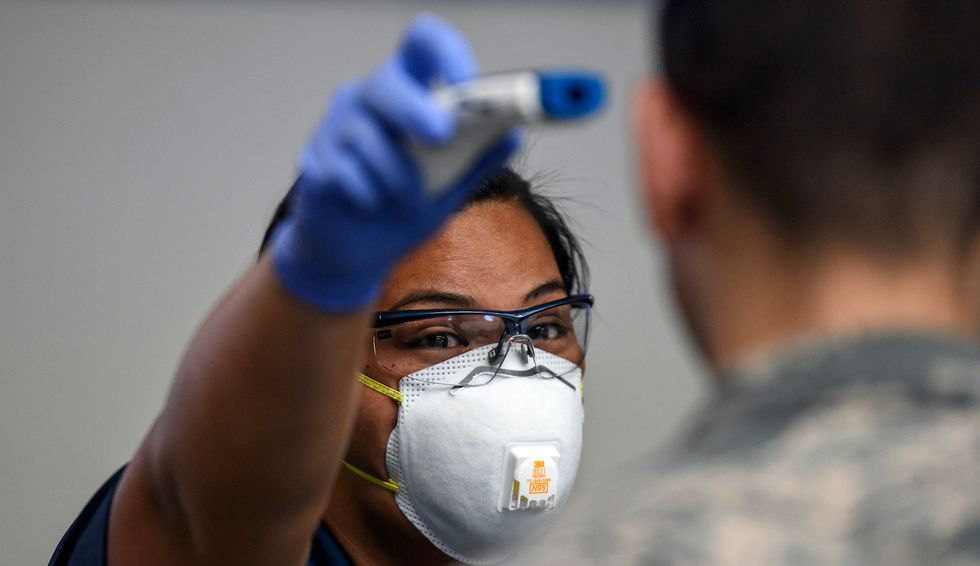 In a potentially disastrous blunder, the World Health Organization made an announcement on Monday about COVID-19 that experts are saying was extremely misleading.

The announcement addressed this question: Can people infected with COVID-19 who don't display any symptoms still transmit the infection to others? For months now, public health officials have said yes, and this fact has driven many of the extreme measures countries across the world have taken in response. Because the virus that causes COVID-19, called SARS-CoV-2, can transmit even when a person doesn't have symptoms, much of the world's population has sought to avoid unnecessary contact with others for fear that anyone could be carrying the deadly pathogen.

But in a CNBC article published Monday reported WHO officials suggesting at a recent briefing in Geneva that transmission from people without symptoms is "very rare." This report blew up on social media, as it gave many who fear the disease new hope and many who have been critical of the extreme measures taken to stop the spread more ammunition. It seemed to suggest to some — erroneously, it's now clear — that social distancing is not nearly as important as has been assumed.

Pretty quickly, however, clear problems with the report began to emerge. A CNBC tweet about the story initially conveyed a much stronger message than even was WHO officials explicitly said, that asymptomatic people don't spread the virus. This tweet was later corrected to say that WHO now claims asymptomatic spread is "very rare."

Even this revised summation of the report is misleading, however. The CNBC article included this vital caveat:

[Dr. Maria Van Kerkhove, head of WHO’s emerging diseases and zoonosis unit] acknowledged that some studies have indicated asymptomatic or presymptomatic spread in nursing homes and in household settings.

More research and data are needed to “truly answer” the question of whether the coronavirus can spread widely through asymptomatic carriers, Van Kerkhove added.

And as other experts reacted to the report, they were critical of WHO's conclusions and public stance. Most importantly, it seems WHO's discussion of "asymptomatic" transmission of the virus focuses on a narrow subset of people who never have symptoms, or have very mild symptoms. The problem is it's impossible, at first, to tell these people apart from the group that is pre-symptomatic — those that have been infected but have not yet developed symptoms. And there's extensive evidence to believe that these people can transmit the virus to others, which explains why it can spread so easily. People who have symptoms will be much more likely to stay at home, take sick days at work, and avoid spreading the disease to strangers. People who haven't experienced their symptoms yet are more likely to be out and about, allowing the virus to spread more widely.

A recent paper published in the Annals of Internal Medicine concluded: "Asymptomatic persons seem to account for approximately 40% to 45% of SARS-CoV-2 infections, and they can transmit the virus to others for an extended period, perhaps longer than 14 days."

Other research has found similar results, which is why so many public health experts were troubled by WHO's remarks.

"We haven’t seen a lot of evidence of fully asymptomatic people transmitting to many others (though admittedly these tracing studies are hard to do). Pre-symptomatic transmission, on the other hand, is why SARS-CoV-2 has been harder to control than SARS-CoV," said Natalie Dean, an assistant professor of biostatistics at the University of Florida. "If fully asymptomatic transmission is rare, this could impact how we monitor exposed contacts (how long to quarantine). But otherwise, it seems more of scientific than practical interest. People without current symptoms could be infectious. Act accordingly." [Emphasis added.]

A. Marm Kilpatrick, a biology professor at the University of California Santa Cruz, made similar arguments.

"Abundant data now shows that transmission from people w/out symptoms makes up a huge fraction (40-50%) of transmission," he explained.

WHO's new announcement, he said, "is going to mislead many people and is based on flawed evidence due to how it was collected."

One part of a problem with the WHO's claims, he said, is that they're based on contact-tracing data. But this means it relies on self-reporting about who a person may have contracted COVID-19 from or who they might have passed it on to, and this kind of information is not nearly reliable enough to base confident scientific conclusions on it. This is especially true since much additional evidence does indicate the possibility of asymptomatic or pre-symptomatic transfer.

"Given uncertainty in infectiousness and bias in contact tracing methodology, there is insufficient for [WHO] to make this claim for asymptomatic transmission and given the confusion b/w pre-symptomatic and truly asymptomatic it's a misleading PR disaster," said Kilpatrick.

Andy Slavitt, the former Acting Administrator of the Centers for Medicare and Medicaid Services under Obama, said he thought WHO's announcement was "an irresponsible statement even though it was based on legitimate observations."

After speaking to WHO, he clarified that it wasn't recommending people change their behavior based off these findings. People should still wear masks, according to WHO, to prevent the possibility of asymptomatic or pre-symptomatic spread.

But the damage may already be done. A small amount of misinformation can spread quickly, and it can be much harder to get the truth out. This is especially true for a topic like COVID-19, which has prompted extensive criticism of experts, some of it justified and some of it spurious, as well as rampant conspiracy theories. WHO's botched announcement will only add to the confusion and rancor.