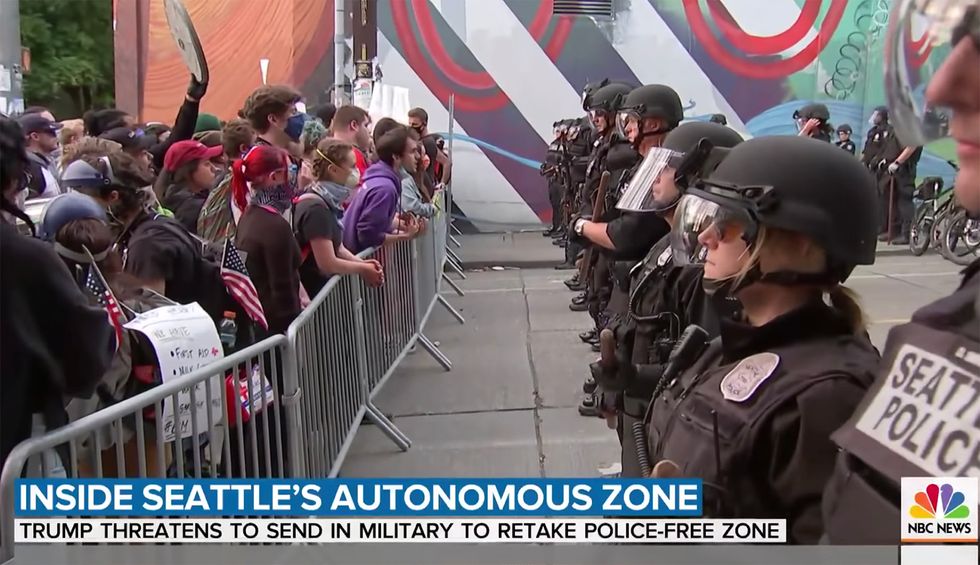 For days, Donald Trump has been tweeting about the “anarchist take over” of Seattle. According to Trump, the city is being “pillaged” by “terrorists” who are murder-burning their way across the city. These “armed lunatics” have “taken over a major American city,” and what frustrates Trump most is that the mayor and governor don’t even seem to know that their city is missing. In addition, the media is conducting a “total blackout on the insanity” in Seattle.  Trump has ordered Mayor Jenny Durkan to “take back the city fast” and promised that if they don’t do something, he will!

The “autonomous zone,” formed by peaceful protesters in a small area of Seattle’s Capitol Hill neighborhood, has been described by Durkan as an example of free speech and genuine patriotism; and by The New York Times as “part street festival, part commune.” But what viewers of Fox News and other conservative media are seeing is something very, very different. Across conservative media, Seattle is being portrayed as a city in chaos, under siege, and simply burning. Where are conservative outlets getting this? Easy … they’re making it up.

The Seattle Autonomous Zone grew up in the wake of the protests over the police murder of George Floyd, and also in response to aggressive actions taken by the Seattle police (both in the the last two weeks and in previous protests) and has largely been in place since Monday. The reaction of city officials has varied from tolerance to cooperation, and even encouragement. City officials have helped to make sure that services within the area are continuing, and that sanitation supplies are secure. Seattle’s police chief has continued to express frustration, particularly after police deserted and boarded up a precinct house, but the perimeter of the “zone” has largely remained open for people to come and go, and is free of the lines of heavily armored forces seen around protests nationwide. For the most part, local officials seem content to simply wait, so long as the area stays peaceful.

But peaceful is not what Fox News or OAN viewers are seeing, what visitors to right-wing blogs are reading, or what listeners to the vast array of right-wing radio stations are hearing. On those sources, the zone is not a small area where people are distributing free pizza and constructing a somewhat pitiful community garden—it’s a hotbed of violence where buildings are burning and people are dying.

To support that position, Fox News hasn’t just been making up stories—it’s been manufacturing images and video. As the Seattle Times reports, Fox has “digitally altered” images to make the situation in the area seem dire. That includes putting together elements from multiple images to create a misleading collage, lifting signs and symbols from one area to impose them on another, and it means that many of the images Fox is using to present the image of chaos in Seattle … aren’t even from Seattle.

Images that appear to show masked and armed men inside the zone are in fact composites taken on different dates and in different places. Burning buildings are actually from shots taken in St. Paul during the first days of the protests there. Some of the pictures Fox has merged together in their “coverage” of the current Seattle are actually two weeks old—or elements from two-week old pictures have been inserted into current scenes to make the situation appear worse than it is.

Fox has also continued to report, and other sources have repeated, claims that businesses inside the zone are being extorted for protection payments, even after the police chief in Seattle investigated these claims and found nothing to them.

The protesters within the zone are anarchists in the sense that there is no formal leadership, which has led to numerous voices claiming to speak for the group and issue various lists of demands (some of which have appeared on Daily Kos). But the most prominent demands of those in the zone are a defunding of the Seattle police, charges against police involved in violence toward Black people, reparations for past victims of police violence, and a dismissal of charges against protesters. In the last few days, representatives from the police have met with some of those inside the zone in hopes of finding points of agreement.

The decades, the Seattle police have been involved in repeated acts of violence—from an assault on peaceful protesters during a 2019 protest, to a brutal, unnecessary arrest captured on video, to even suing to be able to use more violence. The department has a long-standing and well-deserved reputation for using unnecessary levels of force. That’s why, under the Obama administration, the department was investigated for Civil Rights violations and required to take steps to address systemic problems. Against that background, many in Seattle, including many Seattle officials, seem open to the idea of making the Capitol Hill area an ongoing experiment in operating without police, and for how shared community resources can be mixed with ordinary shops and businesses.

Conservatives aren’t upset because Seattle is burning. They’re terrified because it is not.