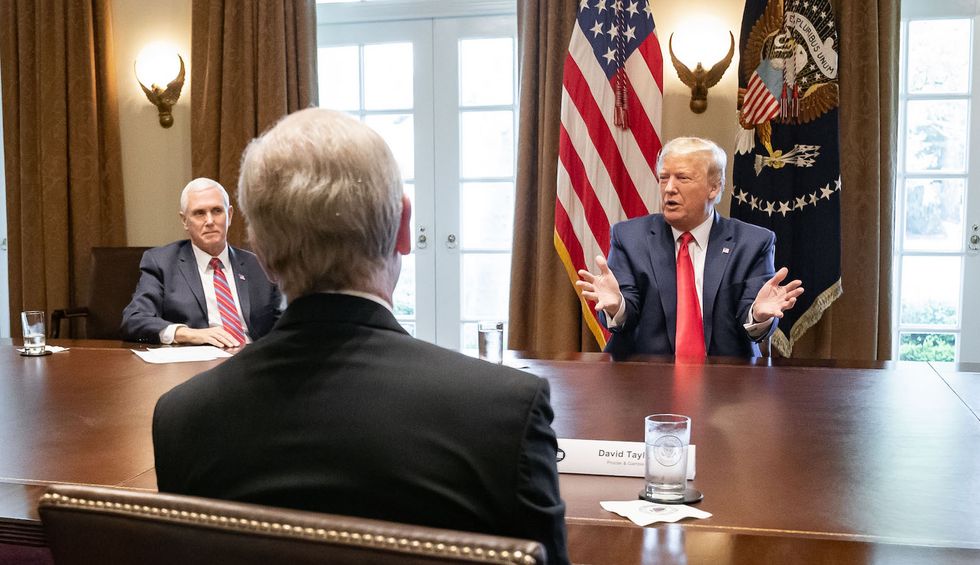 The piece documents his dueling camps of advisers, both in the campaign and the administration, who are split over how Trump should react to the ongoing protests over the killing of George Floyd, police abuses, and racism more broadly.

Trump, the report found, is largely dismissive of the protesters themselves, saying: "These aren’t my voters." This reflects a trait of the president's that has repeatedly shown its ugly head throughout his term in office: dismissiveness toward constituents who didn't vote for him. He clearly thinks he owes more to Trump voters than he does to the American people more generally.

This is a deep moral failing on his part. But the NBC News report also just reveals him to be indecisive and floundering, unable to decide on a cogent response to the protests and the moment they have created. (As I reported recently, polling shows the American people are broadly sympathetic to the cause of the protests in a remarkable swing of public opinion.)

“It looks like he’s bewildered right now," NBC reported one anonymous adviser saying. “We’re losing the culture war because we won’t engage directly, because we’re so scared to be called racist.”

On this side of the debate, Trump's aides want him to attack Black Lives Matter as a "front organization for a lot of crazy leftist ideas that are unpopular," the report said.

It continued: "But another political ally said the opposite — that the president appears to be 'spinning wheels' because he’s not setting the agenda on policing and race in the U.S. when he 'should be leading on these issues' by taking steps like banning tactics like chokeholds."

It seems obvious, given the broad popularity of many of demands from the Black Lives Matter movement, that Trump would benefit himself by taking it seriously. A talented politician could have seized this moment, taken whatever he thinks are the best ideas that address the protesters' concerns, and presented them as a win for all Americans. Trump surely has enough credibility with his base that he could sell them on some modest reforms. He could then be hailed as a uniter and champion of bipartisanship. He could even potentially use the bargaining over policy to push for some of his own priorities that have thus far been rejected by the Democrats.

But Trump isn't actually good at this game of politics. Instead, he's picking a fight with Sen. Elizabeth Warren (D-MA) over renaming military bases that honor Confederate generals. This move may please his base, but his base already supports him. He doesn't have to worry about keeping them on his side — polls show that he needs to expand his appeal if he's going to win re-election.

Trump can't even articulate what he would like to see on a narrow police reform issue. Discussing a possible chokehold ban in a Fox News interview, Trump suggested he was sympathetic to the proposal, but also that he could imagine cases in which a police chokehold was necessary. He was, essentially, just thinking out loud. This isn't leadership.

And it's not the only recent event to demonstrate Trump's lack of leadership. In the face of the pandemic and the devastating recession it triggered, Trump needed to demonstrate quick action, bold ideas, and extraordinary persuasion and organizational skills. But the president displayed none of these. We're still paying for the devastation unleashed by his dismal and often counterproductive response to the COVID-19 outbreak, and the good federal policy that has emerged in response to the recession was driven by Congress.

These are three major opportunities for a president to show leadership, in a way that could dramatically improve the lives of Americans and even play a role in shaping a better future. It's easy to imagine how many other presidents could have navigated these events skillfully and turned them into advantages. The country would have been much better off if the person in charge could have pulled off this feat. But Trump simply isn't up to the task.