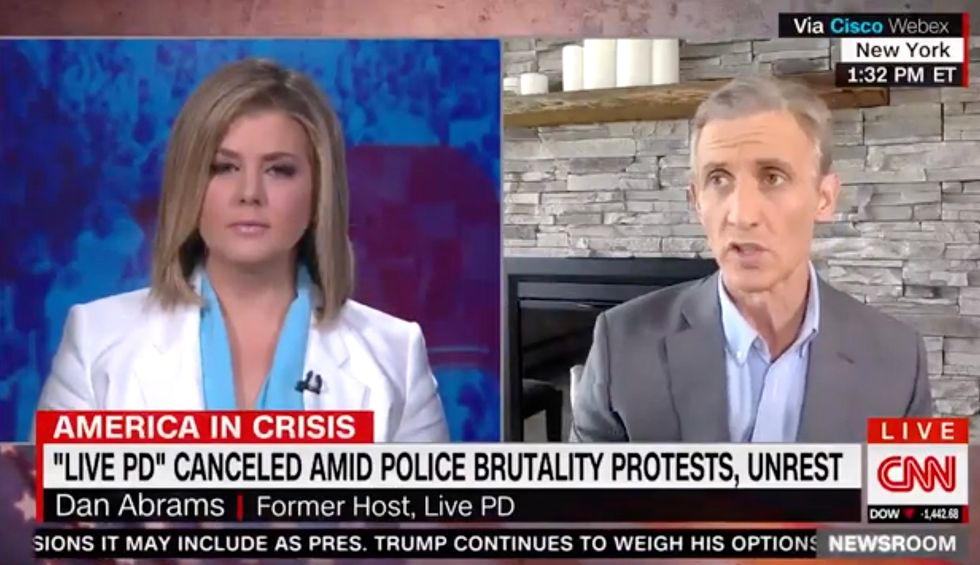 No sooner had the long-running “Cops” been canceled than another police-oriented reality show, “Live PD” (formerly hosted by Dan Abrams) was canceled by A&E. The show has been in the news a lot this week because of Javier Ambler, a black man who died in police custody in 2019 and — like George Floyd on May 25 — used the words “I can’t breathe.” The show had footage of the last moments of Ambler’s life. CNN’s Brianna Keilar, on Thursday, grilled Abrams Ambler’s death, asking why the video in Ambler’s case was “destroyed.”

Abrams told Keilar that “Live PD” had a policy of keeping video recordings for a few weeks and then disposing of them; Brianna Keilar, however, stressed that in Ambler’s case, “The reverse is true here. Destroying the video actually protected the police.” And Keilar wanted to know if there was an exception to the “Live PD” policy of destroying videos when someone died; Abrams acknowledged that “there should have been.”

Abrams maintained that the “Live PD” policy was in place to avoid “becoming an arm of law enforcement.” But as Keilar explained, the show ended up doing exactly that. And Keilar is receiving an abundance of high praise on Twitter for conducting a tough interview.

Abrams’ critics are not satisfied with his explanation — especially actor Sean Penn. When Keilar interviewed Penn following her interview with Abrams, he told her, “It was great to see you challenge that used car salesman, selling everything and saying nothing about what’s going on the country right now.”

After a "contentious" interview on CNN about the cancellation of his show, Sean Penn had this to say about Dan Abra… https://t.co/4pLiMN33QY
— Brock Wilbur (@Brock Wilbur) 1591898369.0

Comedian Kathy Griffin posted, “Wow, @brikeilarcnn conducted a REAL INTERVIEW with Dan Abrams, host of #LivePDCancelled. Yikes, Dan melted down and got hostile with her. #BLM.”

You can read more reactions below: