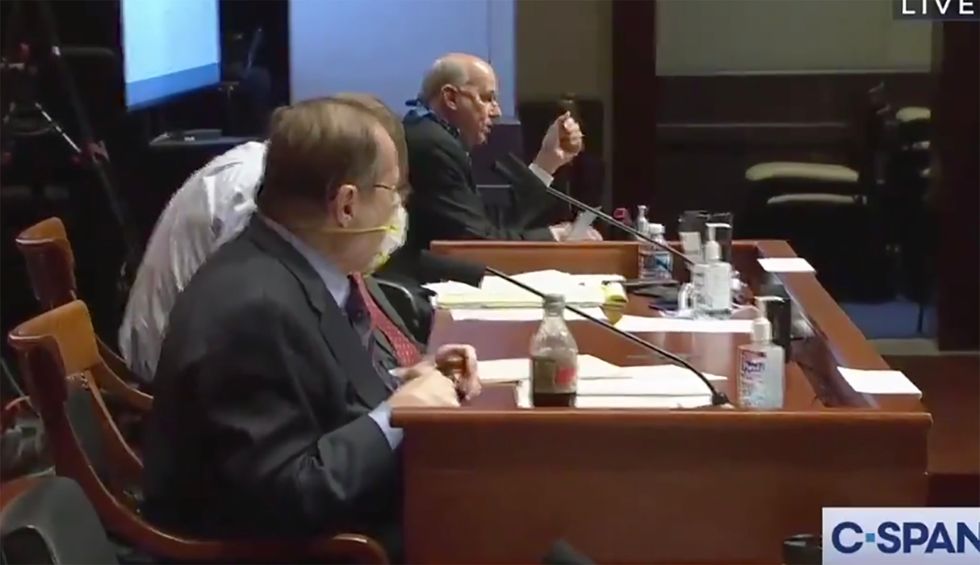 House Republicans, proving themselves worthy of permanent minority status, had no way to defend against the corrupt actions of Attorney General William Barr during Wednesday's Judiciary Committee hearing other than to loudly jingle their keys in hopes of distracting the American people.

Texas Rep. Louie Gohmert, living up to his IQ, literally started banging on the dais as former George H.W. Bush deputy attorney general Donald Ayer relayed that Barr's politicization of the Justice Department represents a clear and present danger to the country.

"I am here because I believe that William Barr poses the greatest threat in my lifetime to our rule of law and to public trust in it," Ayer said somberly. “That is because he does not believe in its core principle that no person is above the law. Instead, since taking office, he has worked to advance his lifelong conviction that the president should hold virtually autocratic powers.”

But as Ayer tried to finish his opening statement, Gohmert began rhythmically rapping the dais, making it almost impossible to hear Ayer, let alone for anyone in the hearing to think. Ayer raised his voice, attempting to talk over the racket.  When Judiciary chair Jerry Nadler told Gohmert to stop, Gohmert responded: "There's no rules about when you can make noise."

Imagine: You’re a former Justice Department official who served under two Republican and one Democratic presidents. You go to the Hill to provide witness testimony and a GOP member, who apparently never graduated from the sandbox, just drowns out your testimony with an epic lack of impulse control befitting a toddler.

The other testimony Republicans were desperate to discredit came from career federal prosecutor Aaron Zelinsky, who withdrew from Roger Stone's case rather than endorsing a lighter sentence for Stone. Zelinsky said he and the other Justice Department line attorneys on the case were told they could be "fired" if they didn't acquiesce to the pressure coming from the "highest levels" of the department. Barr has now openly admitted that he himself decided the department's sentencing recommendation for Stone was too high and directed the acting U.S. attorney to withdraw the recommendation and leave it up to the judge.

Republicans had tried to block Zelinsky from testifying entirely, claiming he shouldn't be able to do so from a remote location. Gohmert mentioned it several times, but Rep. Mike Johnson of Louisiana really bludgeoned the point, forcing Zelinsky to give a reason. Under pressure, Zelinsky said he wasn’t fond of speaking about his personal life but offered that he had a newborn child at home and had discussed the risk of the hearing with a physician. They clearly concluded that since newborns have no actual immune system, potential exposure to a deadly global pandemic might not be wise.

Still, Johnson returned to the theme repeatedly, disparaging Zelinsky as someone who "phones it in," because Johnson clearly had no better point to make. After Johnson had thoroughly badgered Zelinsky on the matter, Nadler finally stepped in to note the witness was fully "complying with the rules of the House."

If House Republicans wonder why the American people went to the polls in 2018 in record numbers to deliver them the worst drubbing in over half a century, this is why. Incapable of adding anything worthwhile to the national conversation on democracy and preserving the sanctity of the rule of law, they resort to asinine tactics unworthy of a grade school classroom, let alone the U.S. Capitol.

Zelinsky says superiors threatened to fire him and his colleagues over the Stone case.

Zelinsky and his co-prosecutors repeatedly raised concerns about the politicization of the case against Stone. The… https://t.co/H9Lkqz8ydm
— The Moscow Project (@The Moscow Project) 1593018642

Another Republican berates Zelinsky for appearing remotely, which they apparently think is both relevant and a federal crime.

Seriously, how desperate are Republicans if this is the best they got?