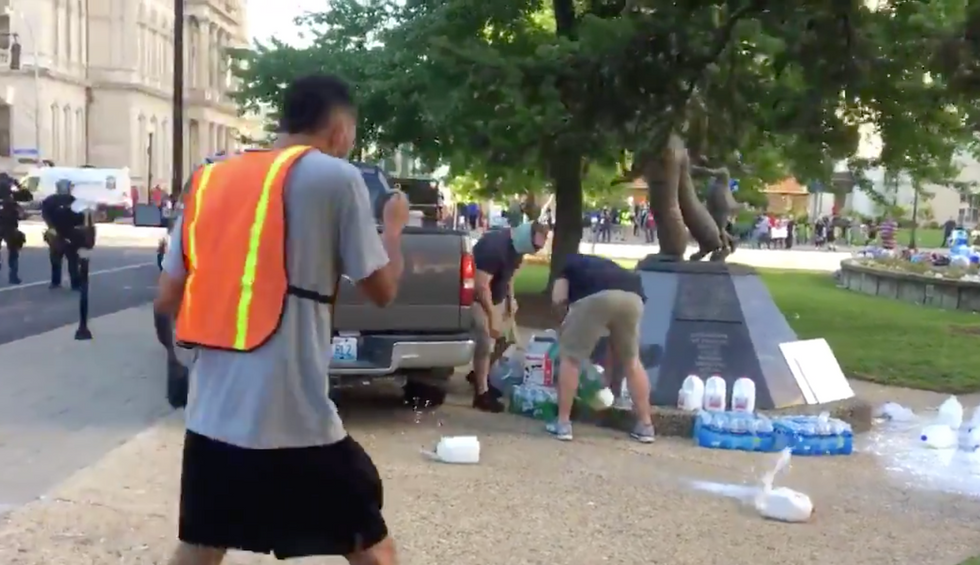 As protests over the killing of George Floyd continue, nonviolent demonstrators have not only been subjected to tear gas and rubber bullets — they have also witnessed police officers destroying water bottles and other vital supplies. And this pattern is being reported in U.S. cities ranging from Louisville, Kentucky to Asheville, North Carolina.

In the Asheville Citizen Times, journalists John Boyle and David Thompson report that protestors “set up a makeshift medical tent” that police officers destroyed. According to Boyle and Thompson, “Glenna Grant, 33, watched in horror as APD officers destroyed the tent, water bottles and medical supplies. Grant said she and others had set up the medical center and had not planned to protest, but rather, provide a safe space for anyone injured during the night.”

Asheville resident Nathan Prentice has discussed the incident on Facebook as well as with the Citizen Times. Prentice explained, “At the stroke of 8 p.m., the APD targeted us first, bashing peaceful medics of all colors, with our hands in the air, into the walls, lifting us off our feet, and throwing us out into the streets. They intentionally slashed every water bottle and every piece of medical supplies there, then gassed them all so that we would give people chemical burns if we tried to help them.”

Prentice told the Citizen Times, “While the property damage and violence of this is appalling, the real issue here is that black lives are put at risk when access to medical support is destroyed.” Police did not respond to the Times' request for comment.

Similarly, Natalie Neysa Alund of the Louisville Courier Journal reports that Louisville police destroyed supplies that protestors had on hand. In Louisville, protestors have been demanding justice for Floyd (who was killed in Minneapolis on May 25) as well as Breonna Taylor, an unarmed African-American woman fatally shot by Louisville Police in March.

According to Alund, peaceful protesters were “shocked” on May 30 when “Louisville law enforcement officers began to smash milk jugs and cases of water protesters had stockpiled on corners.” A female African-American protestor, Alund reports, yelled at the officers, “That’s our water! We are being peaceful!” and “then began to cry.”

Tiffany Kilgore, a 32-year-old protestor, told the Courier Journal, “I watched them stabbing water bottles. They’re supposed to help us, not hurt us. I just don’t get it.”

Louisville Mayor Greg Fischer addressed the incident when asked during a 10:30 p.m. press briefing. The third-term mayor said Mason jars full of flammable materials were included in the protesters' pile of supplies, along with other materials he could not yet identify that could have harmed protesters as well as police.

"The best decision for the safety of everybody was to remove those materials," Fischer said.

But no evidence was given to show there were "flammable materials" around — a claim that seemed at odds with the way the video showed the supplies being aggressively destroyed.

Similar destruction was reported in Minneapolis:

The police also destroyed the entire medical encampment that was put up in the same parking lot. What a disgrace. https://t.co/1WEX72I5d6
— Andrew Kimmel (@Andrew Kimmel)1590911029.0