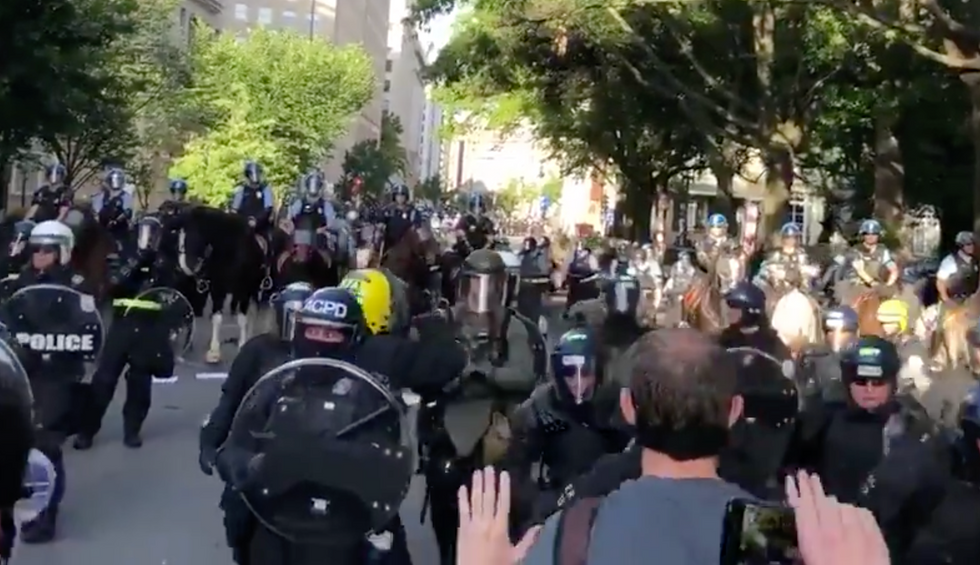 Protesters outside the White House were fired on with tear gas and rubber bullets, surrounded by military police, and pushed out by cops mounted on horseback Monday evening in an apparent effort to clear the way for a presidential photo-op.

In the midst of a disturbing speech from the Rose Garden in which President Donald Trump announced his intention to use the military to quash protests and unrest across the country, law enforcement descended on the protest which was, by the accounts of multiple reporters on the scene, entirely peaceful.

PBS NewsHour's Yamiche Alcindor, on the scene with the protesters, reported that she was teargassed along with them.

Garret Haake of MSNBC narrated a frightening scene as protesters ran from police marching toward them on large horses. Two men ran by him carrying a woman in their arms. When Haake asked is she was alright, she responded: "I got hit bad." Others hurried by with their arms in the air. One man screamed: "We live in a third world country!"

Other police charged at protesters without any obvious provocation.

While there was a curfew of 7 p.m. set for the evening, the aggression from the police began earlier. It appeared that at least part of the intention for clearing the protesters in this brutal manner was to make way for the president to visit St. John's Church, which had been burned the previous night.

"Evidently the police and troops fired tear gas at peaceful protesters to push them back to make it possible for Trump to go to St. John's Church for a photo op," said New York Times reporter Peter Baker.

"The perimeter was expanded to help enforce the 7 p.m. curfew in the same area where rioters attempted to burn down… https://t.co/JcCyLDoIBE
— Josh Dawsey (@Josh Dawsey)1591054965.0

Standing in from of the building, holding a Bible, the president said little. Instead, it seemed he was posing for one of the most baffling and pathetic photo-ops in recent history.

"Is that your Bible?" asked an observer, as sirens blared in the distance.

"It's a Bible," the president said.

He asked a few other administration officials to join him for more photos.