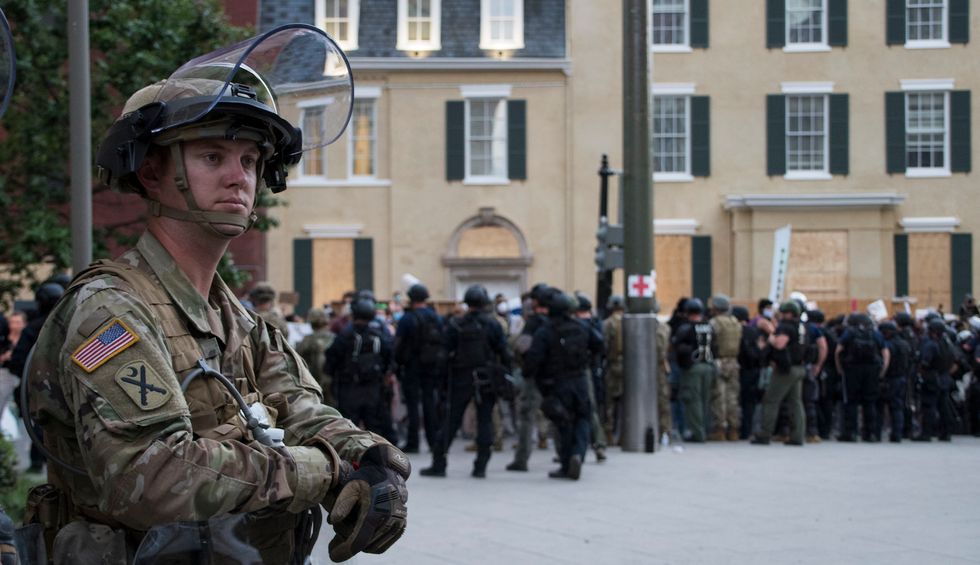 At one event after another, Donald Trump has encouraged police and security guards to be more violent toward protesters. Whether that’s encouraging guards to beat up those waving signs as they are dragged from one of his rallies, telling police to “not be so gentle” when conducting arrests, or insisting that forces need to “dominate the streets” to push back peaceful protests, Trump loves violence. As his 1989 full-page ad urging the murder of five innocent Black teenagers demonstrated vividly, this is nothing new for Trump.

So it should be no surprise that in addressing peaceful protesters outside the White House following the police murder of George Floyd, National Guard units were ordered to use aggressive tactics that went well beyond how they would normally deal with the situation. The reason for this wasn’t just to please Donald Trump; it was done out of fear that if the Guard didn’t play rough enough, Trump would call in military troops from the 82nd Airborne Division and launch a genuine battle against civilians. Under pressure, the National Guard treated civilians in a way that has rattled the force and led to a suspension of recruitment. But apparently … Trump was pleased.

The result of the Guard behaving as Trump’s bully boys, as The New York Times reports, is a “debacle for the National Guard” that has left troops demoralized and ashamed. By violating standard rules, much of the “chaos” that Trump complained about was actually on the military side of the line, where Guard commanders ended up issuing conflicting and confusing orders that sent troops into unnecessary confrontations with civilians.

The situation was made worse when Trump, upset by wholly accurate reports that he had been hiding in the White House bunker, increased his demands for “domination” and sought to deploy active military forces to clear the streets. To prevent what seemed like an even bigger disaster in the making, military leaders scrambled to bring in Guard units from other areas, but this contributed to confusion over chains of command and rules of operation. Both in the Washington, D.C. Guard units and in those flooding in from states whose governors were eager to please Trump, many troops were untrained and inexperienced.

Troops drove heavy armored vehicles through crowds and along Washington, D.C. streets on the basis of supposed authorization that never existed. Helicopters hovered over crowds in violation of every rule of both civilian and military operation. Again and again, as in Lafayette Square, tear gas and rubber bullets were deployed against crowds that were not engaged in violent behavior.

Despite the orders coming down from above, some members of the Washington, D.C. Guard—which contains more than 60% people of color—were resistant to efforts to force them into aggressive action. First Lt. Malik Jenkins-Bey attempted to remind his men that the people ahead of them were not the enemy. He also rejected the language Trump was using in describing the situation: “We’re not here to dominate any battle spaces or anything like that,” Jenkins-Bey told his men. “Our job is simply to stand the line between the police and the citizens so that they can say what they need to say.”

National Guard units that were used to being on the ground to help people in a time of disaster found themselves pointing weapons at American civilians—and in the case of Washington, D.C. guardsmen, some of them were nose to nose with friends and relatives. As Politico reports, one member of the Guard watched while her brother was hit with tear gas and racked by coughing. Many of those in that line sorely wished they were on the other side of the struggle.

But the conflicting commands and continuous pressure to push the crowd ever farther from the White House resulted in a series of confrontations and moments of violence. The result made many concerned about a possible repeat of what happened at Kent State in 1970, and the highlighted risk that comes when military of any type are forced into a situation where the goal is to maintain order, not win a battle.

All of this was made infinitely worse because a battle was exactly what Trump wanted. The attack on protesters and media gathered in Lafayette Square began even as Trump was speaking from the Rose Garden, saying that he was going to “end” the protests, and: “Thousands and thousands of military forces are being deployed.”

For Trump, the goal wasn’t to maintain public safety so that protesters could have their say. Trump wanted to shut them up and clear the streets. To dominate that battle space. To beat them. To win.

Out of fear of what Trump might order next, military commanders misused the National Guard. In their efforts to demonstrate “toughness,” Guard commanders forced their officers to take aggressive action that was outside the standard playbook for dealing with domestic situations. Guardsmen, many of them fresh out of boot camp and untrained, were handed conflicting orders that not only left people on both sides injured (and at least four guardsmen infected with COVID-19), but turned a unit that had been regarded as the heroes of hurricanes and natural disasters into a source of community anger, leaving them dispirited and broken.

On Thursday morning, Trump bragged about all this. Bragged about how easy it was for armed, military personal to sweep the field of unarmed, sign-waving civilians. Trump called it a victory.