‘My biggest risk’: Trump Tells Politico that mail-in voting is the #1 threat to his reelection prospects — and basically admits that he wants fewer Americans to vote 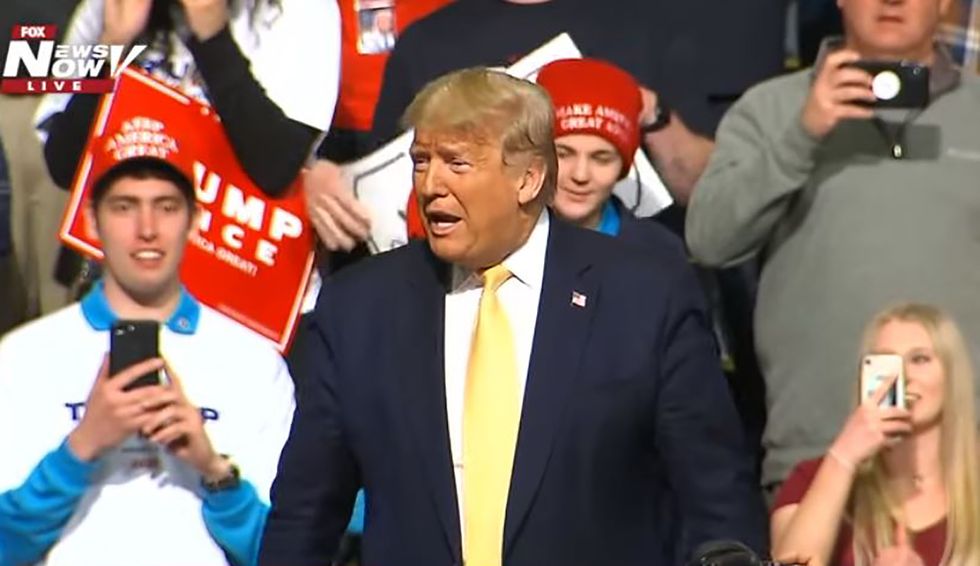 Conservative Republicans have a long history of encouraging mail-in voting, which is why — back in the 1970s, 1980s and 1990s — Democratic candidates awaiting election results would get ready to make a concession speech when they were told that they were a lot of uncounted absentee ballots in swing districts. They knew that uncounted absentee ballots were likely to favor their GOP opponents. But times have changed: President Donald Trump and his sycophants have been railing against mail-in voting and doing everything they can to discourage it. And in an interview with Politico, Trump described mail-in votes as the #1 threat to his reelection prospects — and he essentially admitted that Republicans want fewer Americans to vote.

Politico’s Alex Isenstadt notes, “Trump and his campaign argue, despite a lack of evidence, that widespread mail-in voting will benefit Democrats and invite fraud. The Republican Party is spending tens of millions of dollars on a multi-front legal battle.”

In an Oval Office interview on Thursday, June 18, Trump told Politico, “My biggest risk is that we don’t win lawsuits. We have many lawsuits going all over. And if we don’t win those lawsuits, I think — I think it puts the election at risk.”

During the interview, Isenstadt says, Politico asked Trump a two-part question: “would a substantial amount of mail-in voting — which is widely expected because of coronavirus — cause him to question the legitimacy of the election? And would he accept the results no matter what?” Trump responded, “Well, you can never answer the second question, right? Because Hillary (Clinton) kept talking about she’s going to accept, and they never accepted it. You know. She lost too. She lost good.”

Trump, during the Politico interview, essentially admitted something that his critics have been accusing Republicans of: wanting fewer Americans to vote. Trump’s claims about voter fraud are nonsense: the real fear of Republicans isn’t voter fraud — it’s that former Vice President Joe Biden, the presumptive Democratic presidential nominee, will win the election if there is a heavy voter turnout in areas that trend Democrat.

Trump is not running an expansive campaign, but rather, a rally-the-base campaign that depends on a heavy turnout from those who are most likely to vote for him: older white males, far-right evangelicals and people living in rural areas. Truth be told, Trump’s campaign wants older white males in rural areas and small towns in Central Pennsylvania (the part of the state jokingly referred to as “Pennsyltucky”) to come out in droves — and the more they can do to discourage a heavy Democratic voter turnout in Philly and Pittsburgh, the better Trump’s chance is at winning Pennsylvania again.

Saying that the GOP and the Democratic Party have wildly different bases is an understatement. The GOP base is white males over 50; the Democratic base is much broader, ranging from African-Americans to college-educated white women to Millennials living in urban areas. Trump’s campaign knows damn well that he isn’t going to get a lot of votes in New York City, Seattle, Boston, Philadelphia, Chicago or Los Angeles on Election Night, but if he can discourage turnout in Democratic areas while firing up turnout among older white males in rural areas and small towns, he has a shot at winning a second term.

Trump’s reelection prospects depend largely on voter suppression. And in the Politico interview, he essentially admitted it.