Military leaders put Trump on notice: They won't be party to his authoritarian fantasies 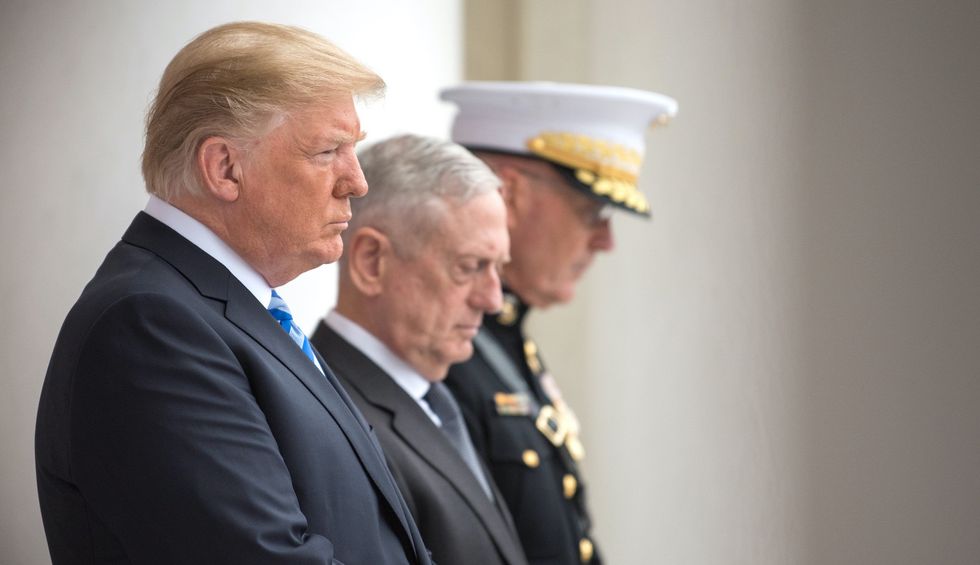 When retired four-star Marine general and former Secretary of Defense James Mattis declared Donald Trump a threat to the Constitution last week, he counseled the nation, "We can unite without him."

Mattis was both right and prescient that the country could find unity, or near-unity, without Trump—something that is becoming increasingly obvious by the day. With or without Trump, the nation is embracing a reckoning on race that seemed almost unimaginable mere months ago before the brutal murder of George Floyd at the hands of Minneapolis police officers.

Among a flurry of eye-catching headlines this week, such as NASCAR banning the Confederate flag at events, the NFL embracing anthem protests, and various cities and states banning police chokeholds and no-knock warrants, two mind-bending developments stand out.

The first is the head-spinning shift in polling support for the Black Lives Matter movement. Not only has Civiqs documented the stunning surge from just 37% support for the movement in early-2017 to 53% support today, but a Washington Post poll found 74% of Americans support the protests in the wake of Floyd's killing. That is simply remarkable. The only other political issue that has sometimes united Americans on that scale in recent years is the coronavirus. During the early days of the pandemic’s spread, several polls found similar unification around social-distancing efforts, fear of a second wave, and other COVID-related health issues. But beyond the pandemic, almost nothing in the Trump-era has enjoyed such unified support as the Floyd protests have—particularly not a social issue.

That same Post-Schar School poll also found rapid growth in support for the fact that Black Americans face systemic racism in policing. Today, fully 69% of respondents say Floyd's killing was indicative of broader problems in law enforcement. That represents a 26-point change from the country's views in 2014 following police killings of unarmed Black men in Ferguson, Mo., and New York City. At that point, just 43% of Americans said the killings represented broader policing issues. But again, getting more than two-thirds of Americans to agree on what was once viewed as a hot-button social issue is striking.

The other unforeseeable point of unity is the near-unanimous military pushback against its commander in chief. Many Americans either hoped or argued in the early days of Trump's presidency that "the generals" might save the nation from Trump. But in a culture and a military structure where deference to a civilian commander is hardwired, even Trump had to work pretty hard to push them over the brink.

It is simply extraordinary that Milley, who had taken heat himself for participating in Trump's folly, made such a public break with a sitting president by apologizing and admitting his "mistake" in a prerecorded graduation address.

“I should not have been there," Milley said of Trump's Bible-wielding photo op. "My presence in that moment, and in that environment, created the perception of the military involved in domestic politics.”

Former Secretary of Defense of Robert Gates also added his name to the stampede of former Pentagon officials criticizing Trump's use of force. That means three of the last four chairmen of the Joint Chiefs (Milley, Martin Dempsey, and Mullen) have now openly criticized the actions taken by Trump and his Attorney General William Barr. So have the two highest-profile Defense secretaries in the past decade, Mattis and Gates.

But what we are witnessing is more than just the Pentagon’s split with Trump; it's a stand for the Constitution and the U.S. military's commitment to it. In essence, current and former leaders of the military are putting Trump on notice that their ultimate allegiance is to the foundational document of our country, not the person who fleetingly occupies the Oval Office. Even the public rift between Trump and military leaders over their willingness to strike the names of Confederate commanders from military bases is another sign of the rupture between the two entities.

This week, presumptive Democratic nominee Joe Biden said aloud what many Americans have been fearing in their private moments and discussions with friends. "This president is going to try to steal this election," Biden said in an interview with the Daily Show, adding that it's his "single greatest concern."

Over the past couple weeks, civilian and military leaders of the U.S. Armed Forces have sent every signal possible that they are not going to stand by while Trump defies the results of a U.S. election. Sure, there's more ways than one to steal an election, but the military just took one potential avenue away. The generals themselves will clearly haul Trump out of the White House and to the curb if he is voted out and refuses to leave on January 20, 2021.

It's a forceful show of support for the heroic activists in the streets petitioning their government for equal treatment, fairer laws, and real justice for all Americans, not simply the white ones. It's exactly the type of bottom-up dissent the Constitution was designed to defend when the nation's elected leaders proved too wildly out of step with public sentiment and impervious to public appeals.

As Mattis said in his treatise, the protesters are "rightly demanding" equal justice under the law. "It is a wholesome and unifying demand—one that all of us should be able to get behind," he wrote. "The protests are defined by tens of thousands of people of conscience who are insisting that we live up to our values—our values as people and our values as a nation."

Mattis and other military leaders have resolutely affirmed that the reason they joined the military in the first place was to protect the people in the streets, not antagonize them. And the protesters’ fight for fundamental fairness and equal justice is indeed a legitimate and unifying demand, as both the polls and the diversity of the protests have shown.

If Trump, in his inability to deliver that justice, tries to instead quash the cries for change rising up from the streets, he will no longer have the support of the U.S. military to do it.