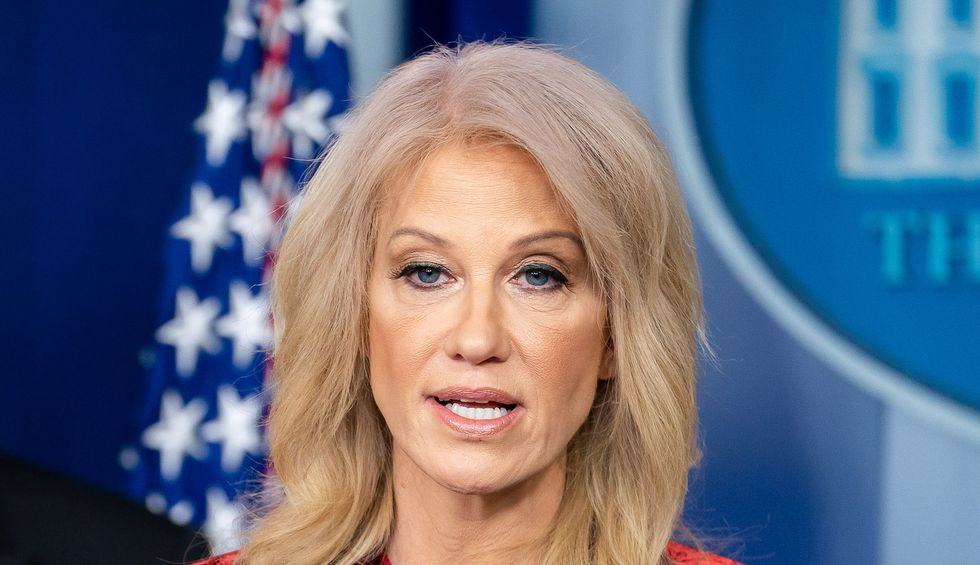 Counselor to the president Kellyanne Conway has reversed her position on the term "Kung Flu" — from "highly offensive" to an acceptable way for President Donald Trump to do the "incredibly important" job of not letting China off the hook — after the racist phrase drew cheers at back-to-back campaign rallies.

Conway in March called the term "hurtful" and "wrong," pointing out that she herself was "married to an Asian," the famous Trump antagonist George Conway, who has Filipino descent.

She was responding at the time to a tweet from CBS News' Weijia Jiang, which alleged that an unnamed White House official used the term against her in person.

Improbably, Conway attacked that same reporter at a Wednesday press gaggle for the same claim, telling Jiang to her face that she did not have the "courage" to publicly out the official.

"I also asked Weijia to reveal to us who said it. I think that would have gone a long way," Conway said to an NBC News reporter before suggesting the individual take it up with Jiang.

When the reporter instead pressed about Trump's use of the term, Conway said that "Chinese virus" or "Wuhan virus" were acceptable terms, because they helped Americans understand that the president has blamed China for the pandemic's spread.

This reinforced White House press secretary Kayleigh McEnany's talking point from Monday: that Trump was only "putting the onus back on China." (She also attempted to falsely tell reporters that Trump had not used the term, even though he was recorded doing so.)

Conway then turned directly to Jiang.

"I still invite you up here to tell us who said that," she jabbed. "And I think that that would be a very important revelation for us. That's not a source for you to protect. That's somebody who shouldn't have said that, and you're claiming did say that. And we still don't know who that was."

Jiang reminded Conway that she had once said the phrase was "hurtful," before asking Trump's former campaign manager if she would still say that to the president today.

"I speak to the president daily on many different topics," Conway replied, adding: "We don't always agree on everything, and that's why I work here."

Conway, seemingly unwilling to let the issue go, returned to the president's defense moments later, saying "it's incredibly important" that he does "not let China escape responsibility."

Jiang pointed out that "Kung Flu" does not refer to any place on the map.

"You don't know that! Excuse me, while the president is saying it, he's also saying this virus came from China," she said. "China is responsible!"

When Jiang pushed back on Conway, the senior official pinned the blame on her.

"You should have come forward a hundred days ago when you had the chance," Conway said. "You lost your opportunity — you lacked the courage to tell everybody who said that to you."

"You like to stoke this instead of solving it. I'm here to solve things not stoke them," she continued. "You did the opposite on this issue."

Throughout the contentious exchange, however, Conway was careful never to speak the phrase herself, saying only that it was "another term" among many which Trump has invoked.

"The 'Wuhan virus,' the 'Chinese virus,' and then he used another term," Conway noted.