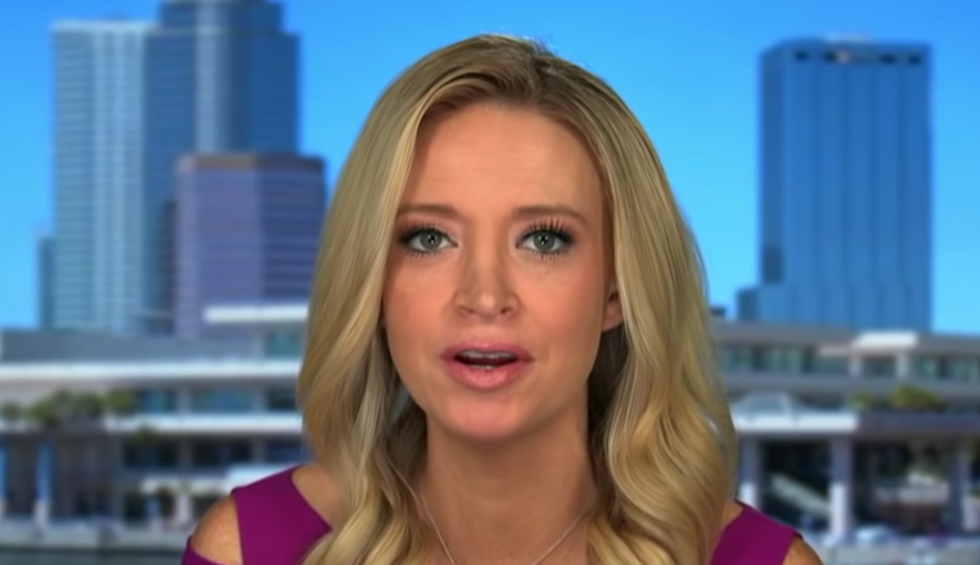 When President Donald Trump says or writes something offensive, White House Press Secretary Kayleigh McEnany can usually be counted on to defend it — which is exactly what she did when, on June 10, McEnany appeared on the Fox News morning program, “Fox and Friends,” and joined Trump in defaming Martin Gugino, the 75-year-old activist who was hospitalized after being slammed to the ground by police in Buffalo during a “Justice for George Floyd” protest.

Tuesday, June 9 on Twitter, Trump described Gugino as an “Antifa provocateur” — despite having zero evidence that Gugino had any connection to the Antifa movement. And McEnany, defending Trump’s tweet, said of Gugino, “This individual has some very questionable tweets, some profanity-laden tweets about police officers. Of course, no on condones any sort of violence. We need the appropriate amount of force used in any interaction, but there are a lot of questions in that case.”

McEnany’s defense of Buffalo police and Trump’s smear of Gugino has become a hot topic on Twitter. CNN’s Kaitlan Collins posted, “McEnany is the first official to defend Trump amplifying a conspiracy by saying the questions he raised were legitimate. Republicans largely avoided it, White House aides said privately it was unhelpful & cringeworthy, and the chief of staff didn't comment while on the Hill.”

McEnany is the first official to defend Trump amplifying a conspiracy by saying the questions he raised were legiti… https://t.co/6ZFG8ZCv4p
— Kaitlan Collins (@Kaitlan Collins) 1591795141.0

@FT1965 posted, “Trump has government experts at his command and relies on fringe conspiracy networks and social media??” The “conspiracy network” @FT1965 was referring to was One America News, a right-wing cable news outlet that Trump referenced in his smear of Gugino.

@Timrsilver posted, “Let’s be honest. @PressSec went on Fox to give talking points to Republicans. Get ready to hear all of them echo the ‘he was raising valid questions’ argument for the rest of the week.” And @JeremyPond wrote, “McEnany is the definition of an ass clown. Perfect addition to the long line of liars who have held that position.”

@BohdiBohdi tweeted, “It’s remarkable that #ANTIFA has managed to create an army of old people who can dive to the sidewalk and bleed from the head, just to make the police look more brutal than they really are.”

@WeareUS67539571 said of McEnany, “This is so dangerous.  This administration is DANGEROUS” — while @RoseSer38526924 asserted, “Someone should sue her for slander.” And @George3May noted that Trump defamed Gugino “on the day George Floyd was buried. Calculated and shameful.”

Twitter user @marlermedia wrote, “Kayleigh will transition into host of the Trump pageant machine once her White House gig is up. That will be one of her few options after selling her soul for 9 months of access.”

@RobertPDean1 said of McEnany, “Does she think the police officers were in the conspiracy to create the picture, or did the 75 year old man trick them? How does she think this conspiracy worked? Have her explain.”

According to Twitter user @EricScott360, “Trump doesn't realize yet that these same Republicans that enable him, and prop him up will eventually turn on him to save their own jobs.”

Montreal resident James Warne, @jwarne007, asserted that McEnany is the essence of an unquestioning Trump loyalist, posting, “She’ll defend anything. She’s one of the most dangerous individuals in the administration today. The ease at which the lies and gaslighting leave her lips is astounding. Her predecessors were kindergarten compared to her PHD.”

@kaitlancollins I can't understand why people such a Kayley McEnany, given what they have seen from prior "employee… https://t.co/aiU33tGDt6
— Stumar (@Stumar) 1591795893.0