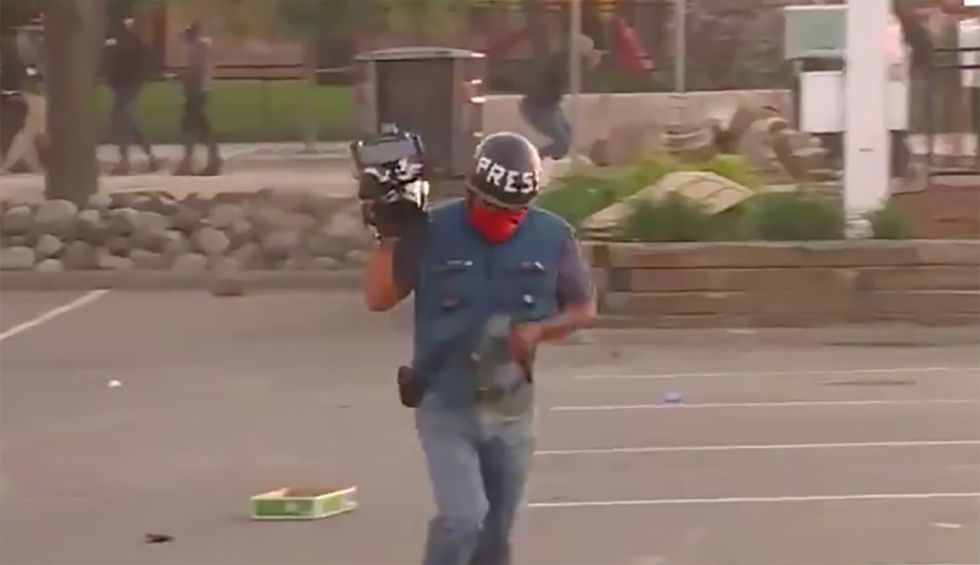 It was hard to miss the chaotic scenes of violence blasted across social media this weekend. Prompted by George Floyd’s death after a police officer was shown in viral video kneeling on his neck for more than eight minutes, protestors in at least 75 cities took to streets across the country, according to The New York Times. The National Guard was activated in at least 10 states as cars and buildings went up in flames and officials in more than two dozen cities imposed last-minute curfews. Police officers were injured in Philadelphia and Richmond, Va., and one person was even killed in Indianapolis when gunfire erupted at a protest there, The New York Times reported.

A most disheartening element of the violence is, however, that police often times contributed to it, targeting bystanders, reporters, and other journalists. (WARNING: This story contains violent video, photos, and language that may not be suitable for younger readers.)

Linda Tirado, a freelance photographer, was shot with a rubber bullet in the left eye and partially blinded Friday covering street protests in Minneapolis, where Floyd died.

“I am permanently blind in my left eye, and the docs absolutely refuse to let me go back to work for they say six weeks,” Tirado said in one tweet Saturday. “I’m definitely not allowed to be near smoke or gas. Usually if I had to stay home I’d spend a lot of time amplifying folk but reading hurts today.”

In an encounter with police in Atlanta, CBS 46 video captures officers pulling two local college students from their car and breaking the car’s glass windows. “We are working to secure the release of these two local college students who were ripped from a vehicle and tased tonight in Atlanta. This is the exact kind of policing behavior thousands have been protesting,” the Georgia NAACP said in a statement on Twitter.

We are working to secure the release of these two local college students who were ripped from a vehicle and tased t… https://t.co/iExCor7tBG
— Georgia NAACP (@Georgia NAACP)1590899994.0

Katy Byron, a third-generation journalist, kept "a running tab" on Twitter of incidents in which police aggressively targeted news teams. Kaitlin Rust, a reporter with WAVE TV, and James Thomas, a photographer with the same station, were shot with rubber bullets in Louisville, Ky. Rust could be heard screaming on camera. “We were behind their line,” she said.

LIVE ON @wave3news - something I’ve never seen in my career. An armed officer shooting directly at our reporter… https://t.co/Nbb1RNSgBq
— Lauren Jones (@Lauren Jones)1590804826.0

Molly Hennessy-Fiske, a Los Angeles Times reporter, said she had her notebook in her hand at the 5th Precinct of the Minneapolis Police Department when the Minnesota State Patrol targeted journalists. "We identified ourselves as press, and they fired tear gas canisters on us at point-blank range. I got hit in the leg. I'll post a photo of that," she said. "I was saying, 'where do we go, where do we go.' They did not tell us where to go. They didn't direct us. They just fired on us.”

She said she and a photographer ended up scaling a brick wall and run into “a random building,” where she took shelter.

WCCO reporter Christiane Cordero said Tom Aviles, an award-winning photographer with the same station, was arrested in South Minneapolis after being hit by a rubber bullet with veteran producer Joan Gilbertson. Cordero can be heard screaming in pain and calling “Joan, Joan, Joan get over here.”

She told her station a patrolman told her: ”You’ve been warned, or the same thing will happen to you. Or you’re next.” She said at one point she begged for cops not to shoot her. She had her hands up. “Don’t shoot me, don’t shoot me,” Gilbertson said.

In another incident, CNN video shows a cameraman wearing a helmet clearly marked with “PRESS” shot by police in Minneapolis.

A man with a video camera and a PRESS helmet runs after being hit by... something... apparently some sort of pellet… https://t.co/WzcKLZ3qXP
— Brian Stelter (@Brian Stelter)1590890053.0

And in yet another encounter with police, Michael Anthony Adams, a VICE News correspondent, said officers raided a gas station he sought shelter at with a family there to protect the gas station. "After shouting press multiple times and raising my press card in the air, I was thrown to the ground," Adams said. "Then another cop came up and peppered sprayed me in the face while I was being held down."

Adams tweeted a photo of the family he was with. He said the gas station had been looted twice and the family was staying behind to defend "what little was left, when marked SUVs and MetroTransit vans pulled up, officers jumped out, and immediately started shooting foam baton rounds and flash bangs."

"The officers then proceeded to walk around the gas station lot and pepper spray those on the ground," Adams added.

From a woman maced and kicked by police in Pennsylvania to an elderly man with a cane shoved to the ground by Salt Lake City officers, the incidents of police violence seemed too numerous to count.

Salt Lake City cops shove down an elderly man with a cane for the crime of standing along the street: https://t.co/PCLkHqQtJg
— Timothy Burke (@Timothy Burke)1590889464.0

"My security advisor and I were shot with rubber bullets tonight. He had PRESS labeled clearly and visibly on his bulletproof vest Before being shot, at a separate incident, I was directly aimed at. I took cover,” Reuters producer Julio-César Chávez tweeted from Minneapolis.

When Minneapolis Police Department spokesman John Elder was asked about the incident, he asked for a copy of the video footage “and made no immediate comment.”

Tonight I was shot in the arm and the back of my neck with rubber bullets in the middle of covering the Minneapolis… https://t.co/E65j9O5Vth
— Julio-César Chávez (@Julio-César Chávez)1590906746.0