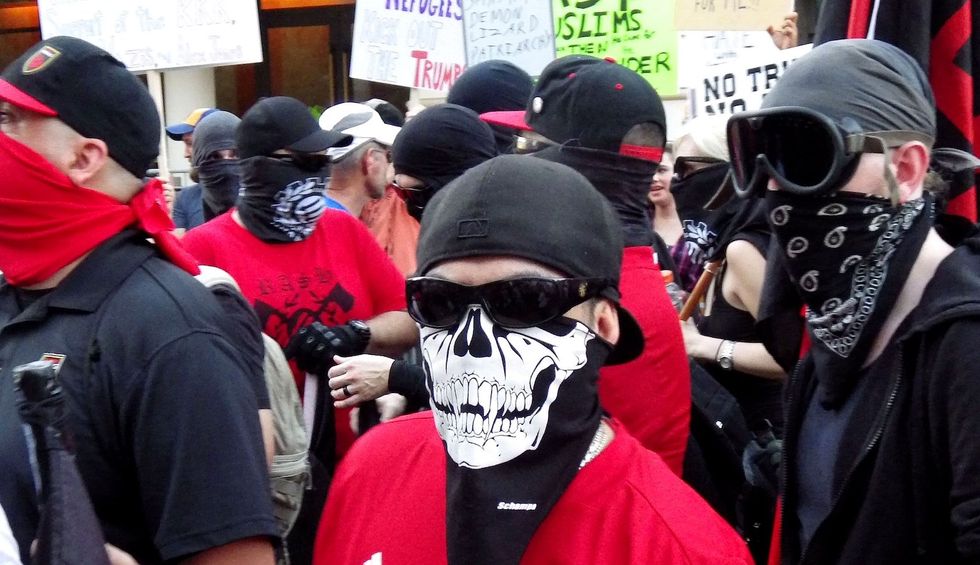 During the George Floyd protests, President Donald Trump and his allies in the right-wing media — including Sean Hannity and Tucker Carlson at Fox News — have been obsessed with the Antifa movement, claiming that its activists were a major source of violence at the protests.

But when it comes to Antifa, hysteria often takes a back seat to facts in Trump’s administration and the right-wing media. Here are four key facts about the Antifa movement.

1. Hannity claimed that “armed volunteers of Antifa” have established a “cop-free zone and taken over precincts” in Seattle.

CNN’s Oliver Darcy has debunked Hannity’s claims, noting that “according to the Seattle mayor’s office, city officials haven’t seen any evidence to indicate armed members of Antifa are even on the ground.” Lori Patrick, a spokesperson for the Seattle mayor’s office, told CNN that while police heard some reports of “armed individuals at demonstrations,” it was unclear what their affiliation was. In other words, there was no evidence to suggest the Antifa takeover of Seattle that Hannity claimed was taking place.

Darcy's piece explained that the events in Seattle have been wildly mischaracterized by the right:

Washington Gov. Jay Inslee described the scene on Thursday as "unpermitted," but "largely peaceful."
Local news channel KOMO-TV, a CNN affiliate, reported that demonstrations remained peaceful on Wednesday, and featured music, dancing, and a movie screening.
The New York Times, which had a reporter on the ground, described the occupied area as "part street festival, part commune."
"Hundreds have gathered to hear speeches, poetry and music," Mike Baker, a Pacific Northwest correspondent for The Times, reported. "On Tuesday night, dozens of people sat in the middle of an intersection to watch '13th,' the Ava DuVernay film about the criminal justice system's impact on African-Americans. On Wednesday, children made chalk drawings in the middle of the street."

2. Antifa is controversial on the left

While the right-wing media resort to hysterical fear-mongering about Antifa, liberal and progressive media outlets have made an effort to have a reasonable discussion about the movement. Antifa, even on the left, are controversial: author Noam Chomsky and journalist Chris Hedges have been highly critical of Antifa’s more militant rhetoric and tactics — which, Chomsky has warned, can be used by the far right to demonize the left. Hedges, meanwhile, debated California-based activist Michael McBride on Antifa’s tactics in 2017. Hedges and McBride are both left-of-center politically, but they have expressed different views on Antifa.

Activist Cornel West has defended Antifa, asserting that Antifa activists saved him from being physically harmed at the Unite the Right rally in Charlottesville, Virginia in 2017. So, the left is hardly monolithic when it comes to views on Antifa.

3. Antifa is not an organization as Trump has claimed

Trump recently tweeted that “the United States of America will be designating ANTIFA as a Terrorist Organization,” but in fact, Antifa is not an organization, but rather, a movement and an ideology. An actual political organization such as the NAACP, the American Civil Liberties Union or the National Organization for Women has a structure and a hierarchy, whereas Antifa is not organized in that way. In other words, someone who identifies as part of Antifa in Boston might have different views from someone who identifies as Antifa (which stands for anti-fascist) in Milan, Italy or Oslo, Norway.

Chomsky explained, “Antifa is very far from a structured organization. It is largely a collection of people disturbed about the ugly and ominous forces that have broken into the public arena with particular venom since Trump removed the cork from the bottle.”

4. Antifa, for all their militant rhetoric, do not resort to terrorist tactics

Terrorists, which could be anyone from al-Qaeda and ISIS (Islamic State, Iraq and Syria) to the Ku Klux Klan, make a point of killing or harming people in order to further their goals — for example, the KKK bombing the 16th Street Baptist Church in Birmingham, Alabama in 1963 or al-Qaeda flying hijacked planes into the World Trade Center and the Pentagon on September 11, 2001. Terrorists, in fact, resort to murder and acts of extreme violence because their goal is to terrorize. By that standard, it’s ludicrous to claim that Antifa fit the definition of terrorists.

Antifa activists have been criticized on the left and the right for taking part in the “punch a Nazi” campaign, but full-fledged terrorist tactics like blowing up churches or setting off bombs on public transportation is not how Antifa operates.

5. Antifa is not the same as the Black Bloc anarchists

The far-right often lumps Antifa and Black Bloc anarchists together, but in fact, they are two separate movements. A video by the Los Angeles Times outlines the differences between the two, noting that Antifa “opposes white supremacy, patriarchy and capitalism” — while Black Bloc “says it battles police brutality, corporate greed, immigration bans and the erosion of civil liberties.”

Black Bloc’s rhetoric tends to be anti-corporate but not necessarily anti-capitalist; Antifa’s rhetoric is often disdainful of capitalism. Some Antifa activists have identified as anarchists, but many consider themselves socialists.