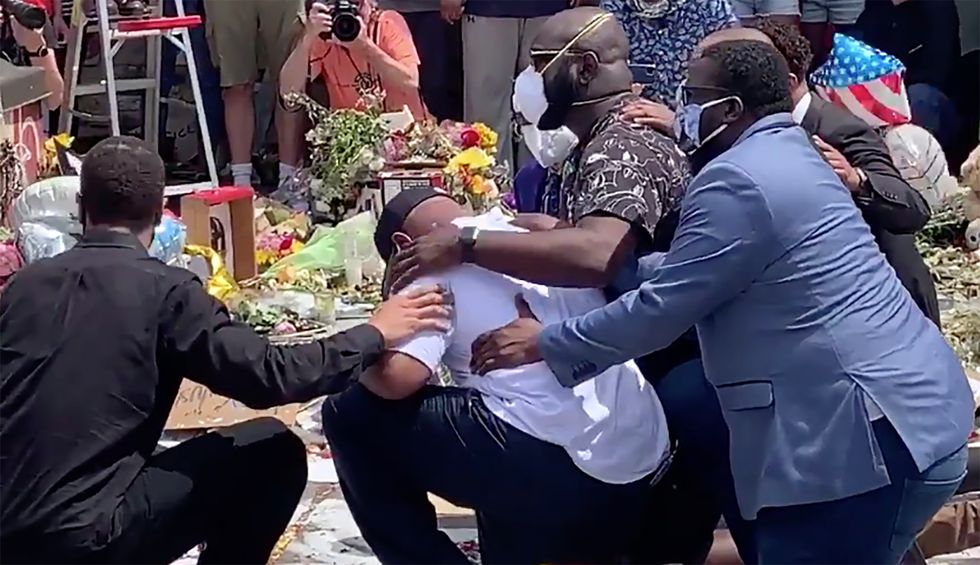 It is no coincidence that during the “Justice for George Floyd” protests behind held all over the United States — as well as in countries ranging from France to New Zealand to Greece to Italy — the Twitter feeds of hip-hop stars Ice-T and Ice Cube have been blowing up. Or that on YouTube, Floyd’s name is appearing in connection with hip-hop classics that were recorded 30 or more years ago. Ice-T, Cube, N.W.A and many other rappers of the 1980s and 1990s were way ahead of their time when it came to addressing police misconduct — and even though far-right Republicans tried to shut them down, their commentary on criminal justice is as relevant in 2020 as it was back in the day. From the War on Drugs to the Prison/Industrial Complex to mass incarceration, hip-hop has offered a wealth of commentary on systemic problems in the United States’ criminal justice system.

N.W.A’s Straight Outta Compton album of 1988 went down in history as a blistering, incendiary audio-documentary on life in South-Central Los Angeles and Compton, California. Although the whole album was controversial, the song that generated the most controversy was “Fuck tha Police” — a commentary on police brutality that inspired the Federal Bureau of Investigation to write a letter to Priority Records (N.W.A’s label) attacking the song. Straight Outta Compton was disturbing as hell, which was exactly the point: Ice Cube, Dr. Dre, the late Eazy-E and others in the group didn’t expect Middle America to agree with everything on the album, but they wanted to put some important issues on the table — including police misconduct and the abuses of the War on Drugs. And 32 years later on YouTube, “Fuck tha Police” is receiving a lot of George Floyd-related assertions from users posting comments like “RIP George Floyd” and “It’s sad that this song is still relevant. Criminal justice reform NOW.”

Full disclosure: this journalist wrote some press releases for Priority and N.W.A in connection with Straight Outta Compton in the late 1980s.

Officers & Narional Guard are government, state and city officials...they should be prosecuted before any Protesters.
— Ice Cube (@Ice Cube) 1591327315.0

And police unions everywhere must redo their terms with their city or county and stop protecting these BAD APPLES f… https://t.co/XEYODpT8qj
— Ice Cube (@Ice Cube) 1591363143.0

Ice-T was a major hip-hop star when, in 1990, he formed the thrash metal/rap-metal band Body Count — and two years later, when Body Count’s first album was released, Ice-T became even more controversial thanks to the inclusion of “Cop Killer.” The song infuriated far-right Republicans, who were calling for a boycott of Ice’s label, Sire/Warner Bros. Records. But instead of trying to silence the provocative rapper, Republicans should have been paying attention to what he had to say about mass incarceration, police abuse and the War on Drugs.

Ironically, Ice went on to play a police officer on the hit television show, “Law & Order.” But he still performs “Cop Killer” at Body Count’s live shows, which isn’t a contradiction. Ice-T has stressed, over the years, that he isn’t anti-police — he is anti-police brutality. And 28 years after its release, “Cop Killer” is receiving comments on YouTube like “Who’s listening in 2020? RIP George Floyd” and “If Ice T and Body Count released this on Spotify, we better make sure this becomes the #1 song in the country! Justice for George Floyd!”

LL Cool J wasn’t among the more political rappers of the 1980s and 1990s, but in 1990, the Queens icon addressed police overreach with his hit “Illegal Search.” Although not as incendiary as “Fuck tha Police” or “Cop Killer,” the song got its point across in no uncertain terms — and LL (who was 22 at the time) stressed to law enforcement that being a young African-American man driving a nice car didn’t automatically make him a drug dealer. “Illegal Search” should have been played in police academies all over the United States in 1990; for that matter, it should be mandatory listening in 2020 for anyone who wants to go into police work. And LL, now 52, has racist revisited the subject of racism and police abuse with a George Floyd-related commentary.

Like “Fuck tha Police” and “Cop Killer,” KRS-1’s “Sound of da Police” asserted that in the African-American community, not all police are there to protect and serve. And on YouTube, the 1993 classic is receiving plenty of George Floyd-related comments — for example, “Who’s still listening after George Floyd’s death by the police in Minnesota” and “I am here because of George.” Another YouTube user posted, “This song is almost 30 years old and is sadly more relevant than ever. When will things change?”