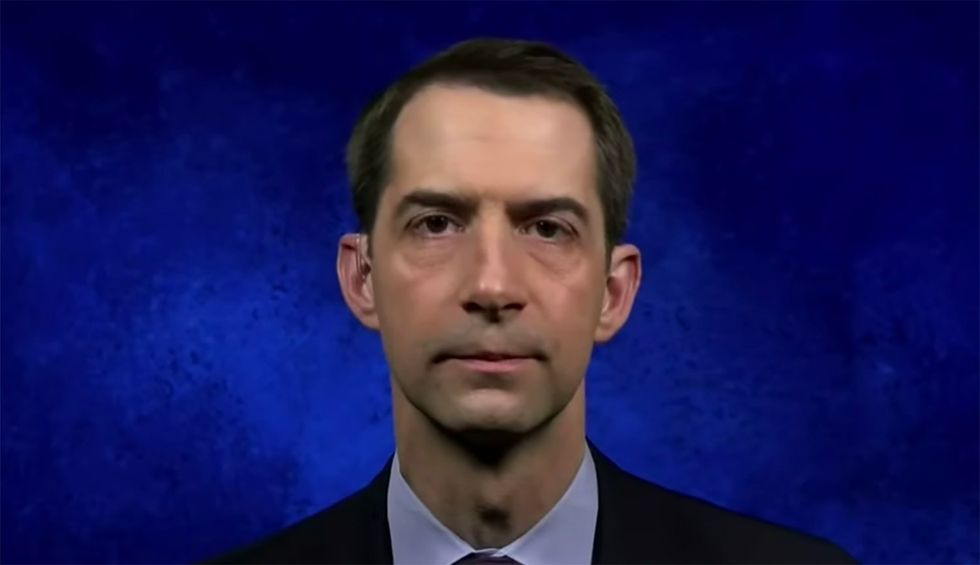 It's a simple headline: "Send in the troops." But its meaning is clear, and it's deeply disturbing.

That's the title the New York Times gave to a new op-ed written by Arkansas Republican Sen. Tom Cotton, one of the most militaristic and hawkish members of Congress. He had previously caused a stir this week by calling for the military to be unleashed on protesters with a "no quarter" order — meaning that they would take no prisoners and simply kill at will. Cotton later said he had been speaking metaphorically.

But his new op-ed isn't about symbolism. He painted a grim picture of the violence that has accompanied some of the peaceful protests calling for justice in the name of George Floyd, a man who was recently heinously killed by police.

"[N]ihilist criminals are simply out for loot and the thrill of destruction, with cadres of left-wing radicals like antifa infiltrating protest marches to exploit Floyd’s death for their own anarchic purposes," he wrote. "These rioters, if not subdued, not only will destroy the livelihoods of law-abiding citizens but will also take more innocent lives. Many poor communities that still bear scars from past upheavals will be set back still further."

Cotton didn't mention the fact that a recent FBI report, as uncovered by The Nation, warned of potential protest violence with links to the right-wing. And he completely ignored the ongoing violence from law enforcement itself, frequently directed at peaceful protesters and journalists with no justification. It's exactly this violence that is fueling the ongoing unrest, but Cotton and his ilk ignore it completely or excuse it. There should be no excuse for unjustified and unprovoked violence by protesters or police, but the government bears special responsibility for making sure agents of the state are accountable and remaining strictly within the limits of the law and morality.

Instead — as always — Cotton wants to ratchet up the level of confrontation, echoing the president's instincts, by bringing in the military:

One thing above all else will restore order to our streets: an overwhelming show of force to disperse, detain and ultimately deter lawbreakers. But local law enforcement in some cities desperately needs backup, while delusional politicians in other cities refuse to do what’s necessary to uphold the rule of law.

The pace of looting and disorder may fluctuate from night to night, but it’s past time to support local law enforcement with federal authority. Some governors have mobilized the National Guard, yet others refuse, and in some cases the rioters still outnumber the police and Guard combined. In these circumstances, the Insurrection Act authorizes the president to employ the military “or any other means” in “cases of insurrection, or obstruction to the laws.”

He didn't consider that escalating the stakes of the clashes, rather than moving for de-escalation, could make the situation worse, not better. And he dismissed the possibility that giving President Donald Trump this power would place us on a glide path to authoritarianism, something many Republicans claimed to fear with Barack Obama was in the White House.

But oppressive acts of force are always Cotton's solution. He once said war with Iran would be over quickly, a crystal clear display of the hawk's fallacy that violence is an easy answer. And conveniently, Cotton seems to like being seen to side with Trump; two of his other recent Times op-eds were defenses of killing Qassim Suleimani and of buying Greenland.

There's no shred of an indication of nuance or thoughtfulness in his argument. There's no fear of unintended consequences, or a warning about taking things too far. It's pure authoritarian propaganda. And it's a disturbing sign of what the GOP is becoming.